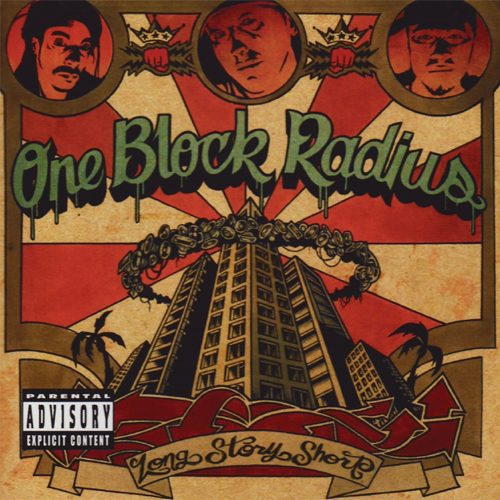 Let’s make it official – the ‘block’ has now replaced the ‘hood’ as the place to be (from) for every local MC who thinks he has a story to tell. Ten years ago it was all about this hood, that hood, my hood, your hood, today it’s the block that provides individuals with shelter in the vast wilderness that is the music industry. However, things are a little bit different with One Block Radius, who found everything a Northern Californian needs to get through the day to be located within walking distance of their studio. Hence the name. A name One Block Radius would otherwise hardly live up to. While two thirds of the group reside in Chico, CA, third member Z-Man was broadcasting live from San Franscisco last time we ran into him (“Dope or Dog Food”). Or maybe Z has found a new home in the Northern Sacramento Valley, given that he also completed the album “Don’t Forget to Brag” with Chico’s G Pek this summer.

While it seems second nature to Z-Man to be on the move, One Block Radius does mark a new beginning for Marty James and MDA, who both were in Scapegoat Wax, a collective that recorded the longplayer “Okeeblow” for the Beastie Boys’ Grand Royal label just before it folded in 2001 (Hollywood Records financed a revamped version, which was released as “SWAX” in 2002). As he did Scapegoat Wax, Marty James fronts One Block Radius, acting as lead vocalist and producer. The hip-hop responsibility does not solely rest on Z-Man, as MDA dubs as the group’s DJ and Marty James is clearly influenced by hip-hop in his approach to music, but Z does lend One Block Radius a fair amount of hip-hop cred. Which is something similar outfits have always strived for, but which comes across more symbiotic on “Long Story Short” than when Crazy Town or Fort Minor attempt to fuse pop and hip-hop.

Both Marty James and Z-Man maintain their personal space, whether the former reflects on the absence of someone that used to part of his life (“Alone”), or whether the latter finds himself in a “itty-bitty town” – Chico maybe? – where he overstays his welcome:

“You tryin’ to tell us we too loud?
Step away from the terrace and turn the stereo down?
(Would you leave right now?)
Am I too off the fuckin’ hook or somethin’?
(Yeah bro, you are)
Want me to check myself or get shook up or somethin’?
The police can get the nuts; the do’ behind me shut
I’m in the middle of the street with two cops
Now in handcuffs, stand up, they in my pockets
got a faulty ID and the rest of the narcotic
[…]
With friends like those, who need bullet holes and racism?
Thanks bitches, I thought you had my back for real
What you tired of me?
We livin’ too fast?”

Eager to prove how lovable a character he really is, Z-Man pens “I Like Him,” a thumping club track that recounts his popularity among Hollywood’s party people:

“She look like Jennifer Love Hewitt
(Stupid, that IS Jennifer fuckin’ Love Hewitt)
Ooh shit, I gotta spit at baby; How you doin’?
Free drinks in our hands, bobbin’ to the music
choppin’ it up drunk, she said she got a Buick
outside, and we should go and listen to her music
So we french-kissed in public, the groupies fainted
I’m on he cover of Enquirer, finally famous
Marty couldn’t believe it as I was rollin’ up the chuey
and told him don’t be surprised if I’m in her next movie”

While the encounter is made up, Hewitt did befriend James later on, as he revealed in our recent interview. Running “through Hollyweird,” One Block Radius can’t help but notice how much is “Make Believe,” whether Z waits outside of a club “under the night / lookin’ at girls who obviously went under the knife,” or whether James ponders “bathroom stalls full of cocaine” in a “booty-ass club” that got turned “into Soultrain,” and that he “could die on the sidewalk and no one would flinch / cause they’d just close both their lids.” They also find common ground on “Excuse Me,” which sees them apologizing for bizarre behavior. Arguably the album’s oddest moment is when Z-Man envisions himself “trapped in a roach egg, tryin’ to escape / every leg pushin’ on the shell hopin’ it break / in the middle of the projects behind a wall that / sits above a sink and a leaky faucet / I dream to be in the kitchen where the grease pop / fiend to be under a fridge where sweets drop.” It’s a shame he doesn’t take this anywhere further, as it ends up a segment on the short “Learn the Words.”

Lyrically, “Long Story Short” leaves quite a lot to be desired, even considering that it’s pop music we’re dealing with here, which can not and should not be gauged by hip-hop standards. One Block Radius make up for it musically with an incredibly rich crossover cornucopia where alternative pop meets black music. No two tracks on this album sound the same. “Not Enuff” is an expert reconstruction of ’80s funk Ã  la The Time/Prince, and “Black Mercedes” has soul where Whitey Ford uses folk, while both selections aptly capture the referenced era from a songwriting perspective. “Look Out Below” is a live romp with a literally incendiary hook: “Look out below, sparks are flyin’ off the microphone / settin’ fire to the whole front row / pyros ignite the whole danceflo’ / oh-oh-oh-oh-oh.” Before you think Black Eyed Peas, One Block Radius is actually more like an alternative version of N*E*R*D, as suggested by the computerized retro chic of “Make Believe” or the impromptu vibe of “Loud and Clear.”

Catchy, upbeat, relaxed, intimate – “Long Story Short” is all those things and more. According to Z-Man it’s “too dope for radio,” but it’s actually not hard to imagine some of the more straightforward tracks making an appearance on a popular TV show like _The OC_ or something (“World on Fire”). And no matter if critics call it post-modern pop, everybody likes a tune with some guitar strumming in it (“Up in the Hills”). Still, some songs might be too layered for immediate access, with different voices often arguing from different sides. “Wake Up Tomorrow” and “Missin’ Sumthin'” are both ambiguous in their attitude and require attention on the part of the listener.

If Z-Man is right and “kids love the shit out of this,” there’s hope for kids and their taste in music. Still it should be noted that Marty James isn’t the most talented singer/rapper, nor a particularly eloquent songwriter. The complexity of One Block Radius is derived mostly from the layered production and the broad sound spectrum. This is what makes their busker act bearable, what prevents their bastard pop from sounding overly bubblegum. It is also part of the attraction from a hip-hop perspective. It’s not surprising that the experimental nature of “Long Story Short” comes by way of hip-hop, but neither is it surprising that it sounds a lot more adventurous than the majority of today’s hip-hop.