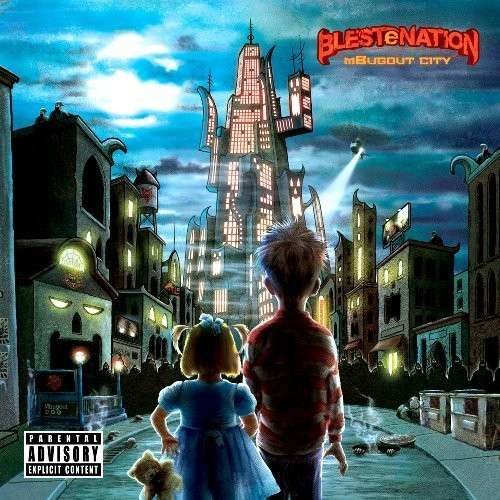 There’s at least a small chance you’ve heard of BLESTeNATION before reading this review; that’s pretty remarkable given they’ve only had one album

mixtape). Exposure counts for a lot though and this self-described crew of “three crazy ass bugged out white boys” have gotten it in big ways. Their revision of the Bananarama pop hit “Cruel Summer” appeared on the “Blue Crush” movie soundtrack, they did work for Maynard James Keenan (of Tool and A Perfect Circle fame) on his side project Puscifier and were even featured on a remix of the popular Ladytron song “Ghosts” – the latter track also being included on their new album “mBugout City.” The structured cadence of the rap on verse two of “Ghosts” has a surprising and clever twist at the end:

“A part of me just wants to say that I’m sorry
But I’m not so I gotta be pardoned
I’m a hardhead and my heart is just hardened
It froze, it’s over darlin
Listen I know that it’s sad that you’re cryin
And I don’t care, but I’m tired
of all the moanin and bitchin and whinin
I just came here to pick up what’s mine
and be on my way, I’ve got an appointment
Yeah, I’ve got a job, employment
You were a puppet, a prop, a pawn for my enjoyment
To get to my point, I met someone else
who’s better in bed, better looking, respects me
Someone who’s strong and protects me
Heh, that’s what she said when she left me”

Ladytron aside a majority of their songs are guitar-laced adrenaline-ridden testosterone-fueled flows. At first one gets the overall impression that BLESTeNATION are a modern day Beastie Boys with more attitude, but on closer examination they have just as much in common with Fort Minor. The group is definitely hip-hop to the core, but their DJ and producer Fafu isn’t afraid to mix the rhymes with heavy beats and licks that Mike Shinoda would bob his head to. Clearly mBugout City

is a dangerous place to hang out though, as you’re immediately challenged to survive on the head moshing opener “We’ll Die.” It’s a make or break song – if you’re not down with their rap rock on this one the rest of the album isn’t for you. Songs like “Beat ‘Em Up” and “They’re Coming For You” only make things heavier and darker as the album goes on, although here and there they strip away the menacing growl and let their hip-hop sensibility breathe a little more. If it weren’t for a riff on the chorus of “Never Let Your Guard Down” the song would be a pretty traditional (and dope) rap track:

“That’s right! Don’t let your guard down homey
Keep ’em +All Along the Watchtower+
It’s +Bigger+ than +Ben+ the clock tower
Better keep inside once it gets dark, coward!
There’s sharks out there starvin and shit
and those fuckers don’t segregate
(They lump everybody into one sum)
Everyone got some bread to take
Newports and Kools y’all, five dollars
Holla back at your boy so he ain’t gotta hit you
on your way out of work tonight and try to rob ya
Don’t let your guard down or he’s good as got ya”

Various and Werdplay may not ever reach the upper echelon of hip-hop lyricists, but if you’re paying attention on “mBugout City” the quality of their writtens and delivery is far above average, particularly if you try to force their style into a rap rock definition. While that’s easy to do for a majority of this CD, it’s ultimately not fair to BLESTeNATION to limit them that way. There’s more going on here than meets the eye, and a group which has for the longest been on the cusp of mainstream recognition. Their album actually plays quite well to both genres – rap heads will dig the beats and rhymes of tracks like “In a Hurry” and “Make Way,” while rock fans will appreciate how loud and crunchy “730 Strong” and “Blackout” (featuring Travis Barker) are. This is Slipknot meets hip-hop – this is BLESTeNATION.