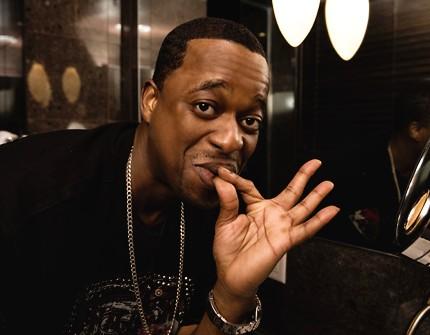 April 20th doesn’t fall on a Tuesday very often and here at RapReviews we felt there was no better way to celebrate this occasion than by sitting down with the king of 4/20 himself, the man who is releasing the album Suite #420

Adam Bernard: How is everything in the world of Devin the Dude?

Devin the Dude: It’s all pretty cool. I’m pretty excited about the new album. I’m getting pretty cool reviews on it and I just did a video that I wrote and I had my homeboy Patrick Cassidy out of Vermont, direct, and that turned out pretty cool. That’s for “What I Be On.” We had a lot of fun doing it. I don’t do a lot of videos, I just wanted to try my hand at writing and trying to get a treatment together.

DD: Man, like five years, six years actually. The To Tha X-Treme album, we wanted to put that out on 4/20, and then we looked at the calendar and realized 4/20 wasn’t going to fall on a Tuesday until 2010, so I was like, man, just forget it, I don’t even know if I’ll be rapping then.

AB: Well, thankfully you are! Speaking of 4/20, as a connoisseur of cannabis, do you do anything special for the occasion, or is it just like any other day of the week for you?

DD: I just make a few extra important phone calls, wish a lot of people happy 4/20, and I make sure at 4:20pm that I light one up.

AB: Do you have a favorite method for lighting one up?

DD: Nothing special, but I do blunts, cigarellos, pipes, bongs, bowls, I’ll smoke out of an old Timberland boot if you can rig it up and get some weed some out of it. I’ll smoke that. {*laughs*} Man, I’ve been saying that for years, so I might just try to make me a Timberland boot contraption that you can smoke weed out of. I think I’m gonna try it.

AB: Forget the steel toes, get the THC toes.

AB: There are a lot of people working hard to try to reform our marijuana laws. Do you think we’ll ever see a day when it’s legal?

DD: I believe so. I believe we’re moving in that direction. I think California is getting ready to legalize it and hopefully Texas will be not too far from decriminalizing it. That’ll be really really cool. You know in Boston, if you just have an ounce or less it’s just a $100 fine, or something. I think that (marijuana) does a lot more good than harm, and not just for health purposes, but financial purposes. I think America as a whole can profit off of it, but the problem is, just like it is now in California, there are so many dispensaries coming up that they don’t know who’s real and who’s doing it just on the low and not paying taxes. It’s hard for them to tax it and to keep up with it, so I guess that’s why it’s so difficult to get it passed.

AB: Is it safe to assume marijuana might be a topic on the album?

DD: You know what, since it’s been a topic on all my other albums, why not? I might dedicate a SONG, at least.

AB: What else can listeners expect from Suite #420

DD: I guess a little maturity. I kinda laid back a little bit. It’s not really a dance or a club type of album, it’s a laid back, put one in the air (type of album). There are a couple of songs on there for you and your woman. If you have a woman you want to just chill with, light up with, have a couple of drinks with, you might be able to enjoy a song from the album.

AB: Is there any chance the album can also come with the woman?

DD: You know what, just tell a few women that you got the album and I believe one of em will probably come with you.

AB: Which label will this be on?

DD: This will be my first album with Koch/E1. Actually I’m with my own label, which is Coughee Brothaz music. I took the project to Razor & Tie last time because I was freshly new off of a long term contract and I just wanted to get a new beginning, a brand new slate, with somebody who was actually new at what they were doing, and since Razor & Tie hadn’t had an urban department, or no urban material out, they wanted to give it a shot on that, too. We didn’t move a whole bunch of units, but the response was cool and it was a nice little rip.

DD: Actually, I was about to sign with E1 for the last deal before I got with Razor & Tie, but they needed certain release forms that I didn’t have for them when it was quite clear that I was off a previous label.

AB: Speaking of that previous label, did you know Rap-A-Lot wasn’t going to renew your contract in 2008, or did that come as a shock to you?

DD: They wanted to renew it, I didn’t want it renewed. It was no shock, it was real cool. I had a long cool little spurt with Rap-A-Lot. I learned a lot and the memories I wouldn’t change for the world. It was a long little rip, I just wanted a spot where I would be able to come out with projects when I wanted to come out with them and have other artists who have been featured with me and been working with me over the years, have them an avenue where they can branch out and get heard and everything, too, so I just decided to come with my own, Coughee Brothaz, and put artists and groups out from there.

AB: You seem like a really laid back dude, does anything ever get you mad?

DD: Yeah, I guess so, when it comes to music and what helps feed my kids and everything. Back in the day when the samples didn’t get cleared, or when somebody would just do a remix to a song that I didn’t approve, I would get kind of upset about that.

AB: Word is you’re having a hand in Dr. Dre’s Detox. Please tell me anything you can about the album and if we’re ever going to hear it.

DD: That would be real cool, man. I went out there a few weeks ago and vibed with him and chilled for a second or two. He’s got some stuff happening, man. He’s moving and grooving out there. He’s got a lot of featured artists and producers that are putting their all into the Detox record and it’s gonna be well worth it once it comes out. Hopefully I’m on it, but if I’m not I can understand, man, and I still wish the best. I know it’s gonna be real cool. Just having a chance to be a part of it, it’s overwhelming, man. Much love to Dre and Aftermath and everything they’re doing over there, it’s coming out real cool.

AB: Do you think we, we being the public, will ever get to hear it?

DD: Yeah. Real soon, too. I think it’s probably gonna be sooner than you think. The way the energy was around there, and how excited everybody was, and their attitudes toward the project, I believe it’s gonna come out real soon.

DD: Naw man, I’m in the Tahoe. The Lacville is in the shop, as usual, man. The same day of the video for “Lacville ’79” the car stopped on me and I had to put it on a trailer the whole time through the video.

AB: It knew you were talkin smack about it.

DD: Yeah, for real, and we had gotten it fixed FOR the video. I haven’t been in it in a while. I’m trying to get everything shined up and up to par to bring out. I got to do some touching up from the song. She needs some new shoes and is getting fitted for a dress.

AB: Sounds good. Anything else you’d like to add about the album, weed, or life in general?

DD: I just want to make sure to let all the fans know I appreciate them supporting me over the years. That’s one of the main reasons I’m still in it right now, because of the support they give when I travel to places and people tell me they’ve heard my music and ask me when I’m coming out with something else. It means a whole bunch to me. I’m speechless actually, because I never thought I would be in this game for this long, but due to the fans and what they ask me to do, I’m still here and I appreciate that.