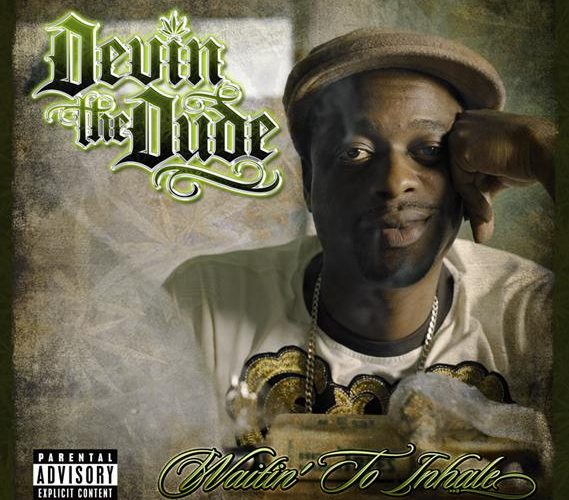 Devin the Dude :: Waitin’ to Inhale

Let’s get one thing straight right at the start of this review – Devin the Dude likes his weed. He likes his weed A LOT. He likes it so damn much he’s willing to name his album after a flick that came out over 10 years ago that nobody who buys his shit has probably ever seen, except for any female fans. Devin probably has his fair share though – he’s a smooth talking Texan who loves the finer things in life, including his fair share of dimepieces. They are second only to marijuana to The Dude, and if he could meet a chick named Mary Jane you could get high by boning she’d never leave his side. Still Devin does manage to put the buds aside just long enough for the skins on “Waitin’ to Inhale” on a few tracks, including the humorous “I Hope I Don’t Get Sick-a-This” – almost:

“I’m just flippin, ridin, slippin, slidin an’ shit
Don’t try this at home cause see me I be in the bitch
Phone rangin man, I got my choice of two hoes
Which one should I choose, aw shit you know how it goes
I choose both, now we on the other side of town stylin
Niggaz mean muggin but I’m still smilin!
Cause one bitch is playin with the other bitch’s titty
Cat hangin out, I’m like HERE KITTY KITTY!”

Chuck Heat produces a piano banger for this track, as well as providing some slick guitar strumming and funk for the following joint “What a Job” featuring Snoop Dogg and Andre 3000. It’s an apt sentiment for Dude, a guy who only seems to be blue when he runs out of chronic smoke, to croon his affection for his chosen rap profession. In fact he even gives out props to the people who help make it happen:

“This is for all the engineers who smoke weed
Can’t forget about the production cost and all the hidden fees
For another rhyme written, we spend time spittin in the booth
Sometimes it’s like a pigeon coup
But it’s all for the cause, yeah so I’m
gonna continue to MC and smoke weed”

Did I mention Devin likes the ganja? Pass the dutchie pon’ de lefthand side if you ever run into him at a concert or a show. It’s hard to avoid the theme when his CD is green, his artwork features him surrounded by chronic leaves, and he appears to be lounging at his desk enjoying the herbal blessings on the back. It’s even more blatant on songs like “Nothin’ to Roll With,” where you can hear a bong bubbling up and Devin coughing as he inhales deeply. Sendar & Mike Dean provide the somber backdrop as Devin laments musically that he’s only got a cold brew and no papers that he can roll a joint with. Well at least he’s still got those buds until the album’s finale with his old Odd Squad comrades, where they smoked the herb “Til It’s All Gone.”

So did we cover that Devin’s a Dude that likes his chocolate thai, his indonesia, his sticky icky icky, his purple smoke blowing in the air? Well Devin is definitely courting the crowd fromJust Tryin’ Ta Live” and “To Tha X-Treme” largely on the strength of his personality so this latest release is no exception. Other than the already mentioned tracks, the only other notable guest appearances are from Lil Wayne and Bun B on “Lil’ Girl Gone.” So if you’re in the mood for a laid back, charming, shit talking hip-hop cowboy who likes his weed and beer and does remarkably good redneck impressions, “Waitin’ to Inhale” is for you – particularly the “weed and beer” part – oh fuck that, just the “weed” part. What Devin has over a hundred generic bud smokers in hip-hop today is a personality that makes you care what he has to say. Take a chance on his dime bag and you won’t be dissapointed.