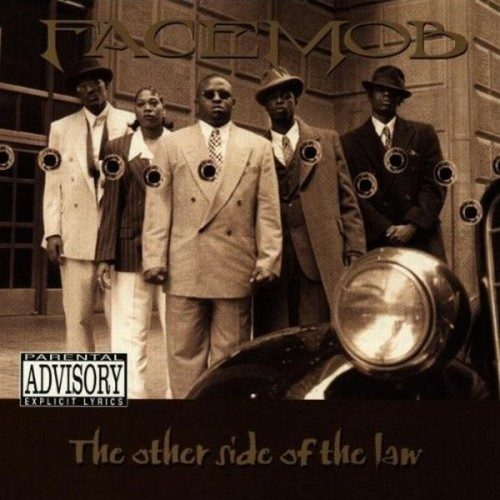 Face Mob :: The Other Side of the Law

Putting together a successful group is a difficult task. Even well established groups seem to fizzle out after the first few albums. The chemistry needed for a group of people to come together and make good music is rarely found and when it is found it fades away quick. Scarface knows this well as the Geto Boys took a few different members before the magic combination of Scarface, Willie D, and Bushwick Bill was found and the group has never been the same since Willie D left the group in the 90s. Out of all the members of the Geto Boys, Scarface has always been the one intent on recapturing that group chemistry. Initially Face’s attempts were confined to replacing Willie D with Big Mike, but in 1996 Face attempted to start from scratch with Face Mob. The group was a super group of sorts as it featured two of the original members of the Geto Boys in Scarface and DMG and Devin before he officially became “The Dude.” Rounding out the group were 350, Sha-Riza, and the incarcerated Smit-D. Highly hyped by southern rap fans, “The Other Side of the Law” was nowhere near as dope as it could have been, but it provided a few dope cuts and marked Scarface’s first serious venture into production.

Scarface produced 8 out of the 10 tracks on here, though to be fair he had talented co-producers on all but 2 of those tracks. His music here tends to be simple and sample based. “Respect Rude” is nothing more than a 1-bar bass line dropped over laid back drums. “Rivals” is better but still pales when compared to the album’s stand out tracks. The tracks where Face lists co-producers tend to be vastly superior to his solo production. The deep funk provided on tracks like “Millions” and “Stay True” can be attributed to Mike Dean who was and continues to be one of the best producers to come out of the Rap-A-Lot camp. N.O. Joe also lends a hand on plenty of tracks leaving us with the impression Face was just learning the ropes at this point and probably listed himself as producer to get a little extra on the publishing side. Overall, the production ends up being on par with the time period – darker, funk-laced tracks that did the job but didn’t stand out too much.

Lyrically, the album suffers from underwhelming performances from all involved. The unknowns in the group don’t provide much, and female rapper 350 is especially inept with cookie cutter lyrics and an unremarkable voice. DMG is also nowhere near as fierce and energetic as he was on his debut album, “Rigormortiz.” This can partly be attributed to the change in styles as by 1996 his original flow would be considered somewhat primitive. Even Devin is dull here as it sounds like he’s forced to give up his natural demeanor to fit in with the hardcore gangsta theme of the album. On tracks like “Da Bank Robbery” Devin sounds out of place and his verse sounds forced as he describes plotting a robbery. On “Millions” and “Stay True” Devin is utilized more efficiently as he drops the hook in his smooth sing/rap style. Despite this not being the best effort from everyone involved, there are definitely songs here worth checking out. “Millions” is a smoothed out and remorseful track about hustling. “Stay True” is similar musically, but addresses the concept of realness while giving us a glimpse of Devinâ€˜s true self:

“On my dick just because I smoke weed, Hell, I drink brew
That’s all I rap because, bitch, that’s all I do
Ain’t nothing new, it’s the same shit you did
But the spotlight is on me because I influence your kids
So you tell me I need to clean my mind
And I tell you you need to beat your child
And stop fucking with me because I never got me a degree
Never went to college but I just got back from getting some weed
And no matter what I call myself you still call me a nigger
So if you talking I turn my head
I don’t give a fuck about what you say
About the filth, the lyrics and shit in my songs
Nigga know right from wrong
Bitch I got kids of my own
Those who love to judge, tend to hold a grudge
And if you do bitch suck my dick and lick my nuts”

“Tales From The Hood” is as close as the group comes to the Geto Boys as the dark track is in the same style. Finally, “The Other Side” serves as the title track and a sign of what this could have been had it been done right.

Though “The Other Side of the Law” is better than their second album, Face Mob never was the southern power house Face surely envisioned. It seems he tried his best by providing production and plenty of verses, but Scarface lacked any chemistry on this one. Part of the problem lies in the fact that half of the group lacks talent, but even DMG and Devin phoned it in on this one. For the hardcore Face, DMG, and Devin fans there are a few tracks here worthy of your collection, but outside of that it’s average music from above average artists.

Face Mob :: The Other Side of the Law
6Overall Score
Music6.5
Lyrics6