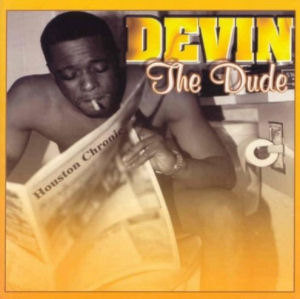 If you’re reading this, chances are you’re already familiar enough with Devin the Dude to know what to expect from one of his solo albums. Often billed as “your favorite rapper’s favorite rapper,” Devin has made his career rapping about some of life’s simple pleasures and everyday problems with his laid-back, almost lazy delivery, aided by smoking massive amounts of “coffee.” Despite making records for nearly two decades, he has failed to achieve widespread mainstream success, but his refusal to sell out is part of what has made him so endearing to fans over the years. “The Dude” marks a turning point in Devin’s career, as he shifted his focus from group acts such as Odd Squad and Facemob to pursuing a solo career, and his debut album only confirms his consistency as an emcee. Longtime listeners will already be familiar with a number of the tracks, but more recent fans will find that little has changed since 1998, as “The Dude” exemplifies Devin’s laid-back outlook on life that has come to characterize his style.

The album starts off on the right foot with the title track, a personal favorite of mine not only because of the thumping bassline but also because of the swag that Devin brings to the mic as he paints a picture of who exactly is “The Dude,” rapping:

“He moves quick real slick never been to the pen or the forum
They got stories ’bout the Dude, the kids bragged when they saw him
And them laws he don’t bomb, that nigga just keep dippin’
Early in the morning flippin’, coffee sippin’
Don’t be trippin’ on niggas they see him walk in the sto’
Get him some cigarettes, cigars and a Colt 4-0
Without payin’ walk out that hoe so calm and so cool (Who’s that?)
Man that’s the Dude and he’s a God damn fool”

Next up, there’s “Sticky Green,” which sees Devin pay homage to his favorite pastime over smooth piano chords and a whining synth in the background. By now, these type of songs may seem like a dime a dozen for him, but that doesn’t mean this one isn’t worth a listen, as Scarface adds a verse to give the track an authentic Houston feel. The southern vibes continue on “Don’t Wait,” as the deep bassline, crisp drum loop, and high-pitched synths on the chorus are reminiscent of a UGK track. But while the song has a slightly more aggressive feel than the rest of the album, Devin chills back out on “Do What You Wanna Do,” as he raps about the importance of enjoying life and making your own decisions, rather than letting others dictate what you do, over gliding synths and laid back drums. The lighthearted feel disappears, though, on “Alright,” as Devin takes on a more somber mindset and spits an introspective second verse on life and death:

“It’s hard to keep away from sin, but you know I try
And hopefully I get it together before I die
Thinkin’ a drink can ease my pain and tough luck
But when I finish, it just leaves me craned and fucked up
Call my folks to tell ’em how I feel
Before I get to speak they tell me someone else got killed
Slowly but surely they’re goin’ one at a time
I wish you could rewind and show ’em some kind of sign
I realize I put my life on the line just bein born
Gotta get up, get out, no time to be snorin’
And just play with the cards I’m dealt
And if I lose I won’t blame nobody else
Cause it’s all about survival and the strongest survive
But even the strongest won’t make it alive
Cause death sneaks up from behind without you knowin’
And just the thought of it has got me goin'”

At 17 tracks in length, one might think that “The Dude” would grow slightly monotonous by the end, but this is not the case. To the casual listener, it might seem as if Devin is focusing on the same few lyrical themes throughout the album without much variation, and while this may be true to some extent, his knack for storytelling gives nearly every track a unique element. Despite the occasional repetitive feel to the music, Devin’s creative, often humorous wordplay, coupled with an impressive range of instrumentals, ensures that there are plenty more hits than misses on “The Dude.” “See What I Can Pull” is one of the most laid-back tracks on the album, with Devin’s steady, sing-song delivery gliding over the beat. “I Can’t Quit” sees Devin take a lighthearted approach to his substance “problems,” as he details the seemingly endless cycle he finds himself in as a rapper â€“ having to make money to buy weed, so he can continue rapping, so he can make money, etc. And Devin takes a somewhat cynical look at the rap game on “Write & Wrong,” as he deals with ups and downs of the job and the lucrative appeal of selling out, rapping:

“We can make the beat slow, so you can speed up the flow
With some cool pimp shit about some weed or some hoes
Or suppose you do a song that you can jam with foreign dancers
Or some growin’-up-hard shit with slim to none chances
Maybe a familiar tune people already heard
Let’s call Morris, see how much he want for a bird
Or fuck it, fuck it, let’s strictly go pop
Do anything for the women while misrepresentin’ your block
You can be famous in public with the right music and subject
You can make millions, nigga, if you just make that million love it
Imagine, you havin’ world tours, getting’ paid
Hoes throwin’ panties on the stage, gettin’ laid
You don’t have a Benz, but if you get on the mic and spit it
You will have enough to get it, whatever you do, I’m with it”

As the album came to a close, I realized that, given the current state of hip-hop, it was no coincidence that I recently developed a renewed interest in Devin’s earlier work. Too often, mainstream rap today is full of exaggerated claims and embellished stories about making money and living the club life, and it can be hard for the average listener to relate. Devin’s honest approach to rapping is what makes “The Dude” such an endearing listen, as he comes off as a down-to-earth emcee who is just trying to make enough money to do what he loves and live his life comfortably. It may not always feature the deepest lyricism, but it’s hard to deny that the album makes for an entertaining listen, and it’s hard to find an artist today who can rival his unique blend of funky southern-style production and a laid-back, surprisingly versatile delivery. Any Devin the Dude fan who has yet to discover “The Dude” should not hesitate to check out what is one of the most slept on albums.