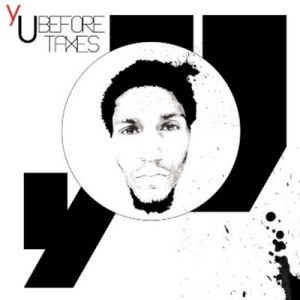 yU was already a veteran of the DMV (that’s DC, Maryland, and Virginia) hip hop scene when he finally broke through last year as one-third of Diamond District with their acclaimed LP “In the Ruff,” an album that blended the boom-bap sounds of classic East Coast rap with fresh production from celebrated Low Budget Collective producer Oddisee and the rhymes of rappers yU and X.O. Capitalizing off the group’s success, yU returns with his solo debut “Before Taxes” in April 2010, employing the same promotion strategy as “In the Ruff,” which was to circulate the album for free online to create buzz before its proper release.

Those who picked up “In the Ruff” (and those who haven’t should) already know that yU is nice on the mic, rocking beats with fresh styles and technical precision through his low-key delivery. “Before Taxes” is more personal, offering his charismatic takes on growing up and getting by. The biggest surprise, then, might be his skill as a producer. Like many of his DC brethren, yU’s beats are influenced by the smooth, densely orchestrated sounds of Pete Rock and J. Dilla, with rich layers of instrumentation, soulful basslines, light guitars and keyboard synths, and peaceful drum patterns. yU is far more than just an imitator, though, and he flexes his creative chops on the more experimental sounding tracks, which are marked by abstract vocal arrangements, unconventional percussion, and clever mixing. Also featuring production from Kev Brown, Slimkat78, Bilal Salaam, Oddisee, and Isabella Banneker, “Before Taxes” is an extremely mellow, soulful listen perfect for the morning ride to work or a lazy afternoon.

yU and fellow DC rapper/producer Slimkat78 comprise the duo The 1978ers, who perform five tracks together. Slimkat78 also produces six of the album’s sixteen tracks, and he shines in the same areas that yU does: endearing, easygoing beats and sturdy, substantial rhymes. He’s a quite suitable partner-in-crime given yU’s sound on “Before Taxes” and their chemistry is natural.

“Almost Time” finds yU narrating a night as the opening act for a rap show over an upbeat, horn-heavy Kev Brown track. The particularly soulful “BreakDown,” featuring the airy vocals of Bilal Salaam, is notable in that it contains no percussion, instead relying upon the sparkly piano lines and subtle guitar licks for structure. The first highlight is “Corners” with its marvelous sax arrangement. yU and EyeQ weave cautionary tales of the pitfalls of street life over gorgeous production and a sturdy drum pattern, and the hook is a rallying gem as well. The rappers trade numbingly-complex bars in the final verse showing impressive chemistry.

“Close” is an inspired song about personal struggles growing up and the progression of friendships featuring a gloomy, whimsical beat by Slimkat78. The subdued horns blend nicely with Isabella Banneker’s soft vocals, and yU raps with a growing conviction that culminates in his livid final verse. It’s a thought-provoking song and the unusual music makes it even more effective. Oddisee makes the most of his sole production, the ingenious “Lunchin,” another powerfully somber musical number that finds yU at his best, profiling the unwise tendencies of unreasonably violent men.

The best song is “Native,” which opens with an unbelievably distasteful clip of Glenn Beck discussing Native Americans. As the 1978ers’ heavy beat builds, yU breaks into a clever verse likening the street mindset to the thought processes of early American Indians.

“Sometimes I feel like the chief, smokin’ sweet leaf before wartime
A peace pipe is the mic, sittin’ in a teepee just writin’ rhymes
Put it in the air, my words are arrows
They aim at the same old thing, ain’t tryin’ to hear those
Them cowboys, they come around talkin’ loud noise
‘It’s our land, native man’ with the proud voice
I’m sendin’ signals to my folks by smokestack
Seein’ when we meet up it’s like we ridin’ horseback
Blackfoot tribesman, story of a warrior
Federal confederates, so now it’s time to settle this
One of them cowboys, I got his gun on my lap
Body in the high grasses and there’s blood on my ax
I swing hard with it, got it from spirits of the past
They tell me what I need to know, ’cause I ain’t ‘fraid to ask
My great grams passed, they visit through dreamscape
So real that I can feel ’em and they still don’t seem fake
They tell me ‘Watch blue eyes closely
Don’t sleep, a trap is bein’ set, but they’re really not a threat
Just know that the wisest man’s heart speaks loudest
They want you to fiend for money and power, don’t allow ’em’
Like I said that night, we met up by moonlight
Tribesmen, we stand taller than the totem pole type
And in the middle of the powwow we all heard a loud sound
Then I saw an ambush, they shot one of ours down
And our guard’s down, just for a second
Or at least that’s what we want ’em to think, pulled out our weapons
The aim was lackin’ while we tossin’ big axes
Enough to make our enemies retreat and move backwards
I sing a song of truth, courage, and respect
Jumpin’ out there like Geronimo, we stand up for that
And our plan of attack is straight Cherokee strategy
You can kill me but you cannot kill my legacy”

Perhaps most significant is that the track pays homage to yU’s own Native American heritage.

It’s a great concept performed with seamless execution, and the track has an excellent instrumental outro with tribal-sounding flutes.

“Memory” featuring ERK is a deeply sentimental track perfect for reminiscing. Both MCs recall times good and bad during childhood, and the nostalgia continues on “The Rock,” where the 1978ers extend goodnatured love to their families. The final two posse cuts “InTheReign” and “Brainwash” are understated jewels. The former is a somber piano-based number with EyeQ and Omun, and they take the time to look back at their upbringing and origins before looking ahead to their futures. The latter features InI veteran Grap Luva as well as Finale and OP Swamp 81 getting busy over a quirkily appealing Slimkat78 beat. yU’s instrumental tracks are also highlights: “Fine” sounds otherworldly, with distant vocal harmonies and a winding organ reminiscent of a lost Doors track, and “MmHmm” is built around a fuzzy guitar loop, jagged cymbals, and a whistle.

Over the last few years, the Low Budget and Diamond District family have established a unique, identifiable sound for DC hip hop with their nostalgic approach, smooth beats, and humbly thoughtful rhymes. yU inhabits a similar realm to his well-loved friends yet still impresses as individually distinctive. Fans of Kev Brown, Ohmega Watts, and DJ Jazzy Jeff owe it to themselves to check out “Before Taxes,” an album with a truly great feel and 53 minutes of dopeness that I expect will prove a lasting listen as warm weather comes our way.