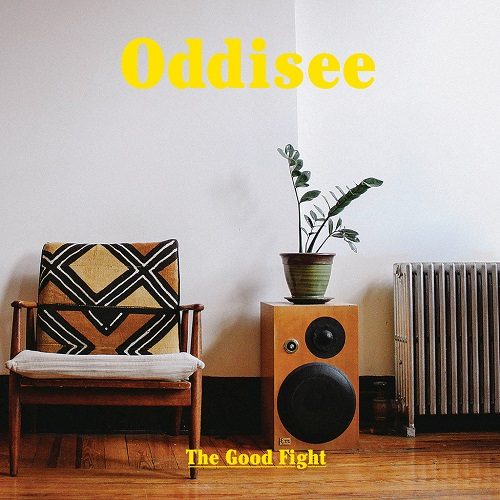 Amir Mohamed el Khalifa, better known as Oddisee, is nothing if not consistent. Since 2008, he’s been releasing quality hip-hop music on a yearly basis, both as a solo artist and as part of the Diamond District. He’s so dependably good that it is easy to take him for granted. His latest release, “The Good Fight,” is yet another solid entry in his discography.

The album starts with “That’s Love,” one the of the best songs he’s recorded. It’s about the kind of love that a good friend or parent provides, offering both support and a necessary voice of sanity:

“When you told me the truth even if it really hurt
‘Cause you knew a lie was worse
(That’s love)
When you let me borrow money that you didn’t really have
‘Cause you knew what I was worth
(That’s love)
When I was at my worst you would tell me I would blow
When I thought that I would burst
(That’s love)
You taught me how to help others and through that discovered
How to put myself first
And here we are again just confronting fears
Whether pain, or gain, it’s a bunch of tears
Blood, sweat, and peers, probably disappear
When smoke starts to clear, their persistence near
Pay attention to the folks who fan the flames
They’re the ones who matter most in the gravity game
When stakes weigh you down and they stay around
And pick up pieces of you off the ground
That’s love”

“That’s Love” is an infectious, jazzy song brimming with horns and organs. It bounces along at an unstoppable pace, only pausing for the hook or an organ solo. It is a song that is more dynamic and musical than what I’ve come to expect from Oddisee. He’s an artist that I know for his competent but no-frills flow and his sampled beats. On “The Good Fight,” he’s mixing it up by singing adding R&B elements to his songs. Ironically, this more musical direction comes as he is going in the exact opposite direction of the mainstream. A lot of the songs on “The Good Fight,” and the album title itself are about how he is trying to forge his own path in hip-hop that is separate from the hedonism and shallowness of the mainstream. “I’m just trying to break out the mold,” he raps on “Belong to the World.” “Trying to do the opposite of errything I’m told.” On “Want Something Done,” he complains about the industry, rapping:

The notes for the album state “It’s a meditation on our capacity to love and the bonds binding us together. It’s our ambition and greed warring with our sense of propriety.” Much of “The Good Fight” details Oddisee’s success as an artist. He talks about making six figures, going on tour, and how’s he’s managed to maintain his integrity while making it as an artist. It never comes off as simple bragging, though, because Oddisee is always willing to call himself out on his own hypocrisy and shortcomings (“Contradiction’s Maze”), and he’s rapping about being comfortable, not obscenely wealthy. He’s not flying a private jet to his gigs overseas; he’s flying coach like the rest of us.

Oddisee avoids coming off too self-righteous or nagging. “Counter-Clockwise” is about a friend who on the wrong path in life. Oddisee offers him love, not scolding:

“Let me in, let me closer
Let me hold on to what you can’t composure
I’m no pushover, more like a boulder
Come test me and rest on my shoulders
I really mean it
I know you’re the meanest to me
Cause I’ve seen your hold ups
And you don’t know trust
You only know bluffs
This world is so tough”

Musically, the album has several soulful, R&B-tinged tracks. Singers Maimouna Youseff and Nick Hakim sing on three tracks, and Oddisee himself sings on several others. It’s a nice break from Oddisee’s relentless bar-spitting, and adds a welcome musicality to the album. He also provides plenty of straight-up, unadulterated hip-hop for those who prefer sample flips and rapping. Oddisee isn’t taking any wild left turns, but he is continuing to grow as an artist, and perfect the brand of old-school leaning hip-hop beats that has made him (and his label, Mello Music Group) so successful.

Oddisee and his label provide an alternative path for hip-hop to take that isn’t obstinately retro, but also doesn’t cave to the worst leanings of the mainstream. He’s built a career on being a complicated and intelligent rapper who makes beats that build on the tradition of The Ummah and DJ Premier while continuing to move forward. Most importantly, Oddisee makes good music that deals with real life issues with wisdom and humility. Oddisee is not only fighting “The Good Fight,” he’s winning.