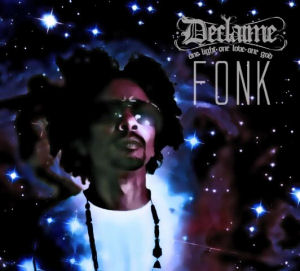 Dudley Perkins a/k/a Declaime seems to have sprung from the womb an underground rap favorite. Review after review has noted how D maintains a loyal cult following with his often off-beat and occasionally spaced out raps, yet has often found his single biggest enemy is in-store distribution and mainstream press coverage. In a sense the bio accompanying his new album “Fonk” does him a bit of a disservice as it claims Declaime has a combined 27,000 scans at retail under his two aliases – a number that seems far too low even for today’s depressed retail atmosphere. If one could include side projects, collaborations, compilations and digital downloads there’s no doubt his totals would be at least 2X to 5X higher – and that number wouldn’t count hand to hand sales at live shows. I can’t even begin to imagine a 15 year rap veteran making a living selling only 1,800 albums a year.

Thanks to Declaime’s imprint SomeOthaShip Connect linking up with industry powerhouseE1 Entertainment, “Fonk” has a chance to be D’s most widely available retail album to date. The good and possibly bad news is that the chance for mainstream exposure hasn’t changed up his style one bit. It’s evident from the jump when looking at the cover art what you’re in for, as Declaime’s disembodied head floats through a night sky with the light of distant stars reflecting off his sunglasses. His dread hair functions as a virtual black hole, creating a a completely impenetrable negative space in the universe. Make no mistake about it that D wants you to know he’s OUT THERE, and yet the title “Fonk” is itself an attempt to keep him grounded. There’s a very George Clinton-esque allusion to that spelling, an attempt to be more funky than plain ol’ funk. Even the producer’s name references that mindframe – Quazedelic. It’s not hard to hear the Parliament-Funkadelic sound in tracks like “Dad”:

“Can you handle this truth?
Some can’t even if they had undeniable proof, so raise the roof
West coast is on fire, on planet Earth I was placed to inspire
Wipe out all you liars, all you fake silly phonies
Fo’ Big Dad say so
He say go fo’ the gold, raised on thought patterns
A hundred times fold, cause we ain’t do what we was told
We actin out way too bold, full ego-trippin
Come let me shatter your soul
Fragmental elemental translation Declaime
Warpath to weak, annihilate the lame
Permanent boogie on your brain, new thang a new slang
Watch out that funk monster might leave a stain
that remains ’til all men stops dyin, Big Momma stops cryin
Fonk monk, spreadin interplanetary seeds”

It’s worth noting at this point that Declaime subtitled his album “One Light * One Love * One God” yet his monotheistic views don’tALWAYS seem predicated by his Christian upbringing. One gets the impression Declaime views WHAT that “One God” is depends entirely on the faith of the individual and their perception of the universe is – in other words all beliefs are equally relevant and all roads lead to the same unifying cosmic force. Declaime’s spirituality might strike some as too overreaching or even a bit like a trippy 1960’s hippie, but his grand unifying theory fits well with the “Fonk” he aims for on this album. After all there’s no race, religion or creed to what’s funky – the funk is accessible to all and has been since before George Clinton was even born. Despite the possibility such openness in his attitude could lead to a lack of focus, his one word song titles (with the exception of the opening track “Declaime MC”) tend to closely reflect his lyrical topic. “Gangsta” is indeed about gangsters, or at least those who fake like they are:

Declaime makes no apologies for deriding the nihilistic tendencies of both real and fake gangsters, even though he notes that “everybody’s got a little gangster” within them as far as a capacity for taking no shit. Still he’s clearly not impressed by the millions of wannabees “lookin like Ice Cube as a teenager” and there’s no reason he should be. D’s not just on some other shit, he’s on “SomeOthaShip” traveling the cosmos as the captain of his own “Fonk” vessel. The journey isn’t always smooth sailing though. While nothing here descends completely into a jumble of Kool Keith excrement style nonsense, his highly non-traditional verbal delivery often gets in the way of the very beats trying to present it. The closest he comes to expressing a Christian view is on “Light” and ironically it’s one of the hardest songs to listen to. “Hungry” on the other hand is almost too loose, as a Rastafarian bong influenced rap floats over an instrumental so understated he’s practically rapping a cappella.

In general Declaime manages to find the right balance though such as on the old school b-boy inspired “Warrior” and the spiritually thoughtful “One.” With only 11 tracks on “Fonk” there’s not a lot of room for mistakes, so it’s fortunate that they are few in number, though in the end this album seems tailored more to his already existing cult following than to a more widespread audience. There are certain kindred spirits in hip-hop who would lend well to an enjoyment of this album – if you like Del, Aceyalone, MF Doom or Wildchild this one’s definitely for you. If your favorite rappers are Gucci Mane and Shawty Lo though stay far far away – this “Fonk” is not for you.