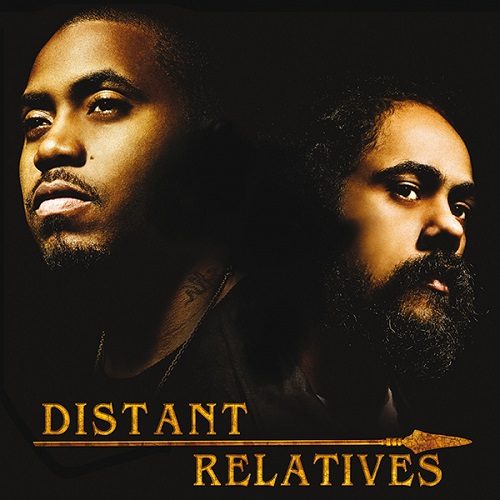 Some things are worth waiting for â€“ whether it leads to success or failure, its very existence defies belief, and you’re just happy it is finally here. I’m talking about, of course, the World Cup that kicks off in South Africa on June 11th, a sporting event second only to the Olympics in popularity but more enthralling. Africa has waited a long time to host its very first one, and whilst, undoubtedly, a million things will go spectacularly wrong, it will all come together (and England will win). The Marley family, Jamaica, are footie mad, so releasing it a few weeks before kick off is no surprise. Damian’s ode to the continent is likely to be the universal soundtrack to summer 2010 for thousands around the world, in every corner of the globe. But how does this long awaited collaboration with Nas work out? Can it even be called that in the truest sense of the word? And what kind of shape is Jones even in, given his recent travails?

Cheeky album opener “As We Enter” gives practically no indication of what the LP is actually like, with Nas and Marley tag-teaming the funk, meshing perfectly. That is the only time they go line for line, but it serves its purpose well, a warm welcome mat for “Distant Relatives” whilst also immediately proving that the chemistry isn’t forced. Next up, K’naan grabs his opportunity to shine with both hands, practically stealing the superb “Tribal War” with a sterling verse, although D’s chorus is perfect too. After a while, however, you start to notice the foundation of the album: the intricate attention to detail, with each and every number crafted individually. “Strong Will Continue” finds a stunning final verse from Nas, spilling his thoughts out on wax with complexity, brutal honesty and, possibly a sprinkle of that typical Jones brand of hypocrisy. Yet, though he sounds enraged, a minute but clever effect: the heartbeat that pulses stays consistent (amongst any situation, he can keep that icy cool). The first couple of spins are undoubtedly uneven, but persist and all manner of hidden treasures begin to catch a glint of the sunlight. Bizarrely enough, songs like “Leaders” and “Friends” eventually become preferable to the more immediate ones; the latter, in particular, is something that we can all directly relate to, but a subject matter that few rappers care to broach (in this context, real friends become family).

Yet, already by this early stage, trying to picture Nas without Marley or vice versa leaves a black hole: they work so remarkably well together that any naysayers have no ammunition. You could even dare to dream that they do this every few years, or whenever the inspiration calls â€“ there is a natural affinity present, it is something to behold. As is the music: this isn’t an individualistic or opportune melee of “hot riddims” but a carefully constructed, yet more or less organic, live show. It snakes at will, switching to accommodate (more frequently) Nas, meaning you get almost double the amount of “instrumentals”. There is very little that doesn’t work, with both Marley (obviously) and Nas (surprisingly) meshing flawlessly into practically everything. Live instrumentation suits Nas, it’s strange to think now just how little it has peppered his career thus far – it could prove a stunning addition to his future arsenal.

The grandiose melodrama of “Dispear” possesses a myriad of subtle brushstrokes, such as how the snares are triple echoed to resemble the automatic gunfire that Marley describes. “Land of Promise” is the closest we get to “Jamrock” – it’s certainly not a universal banger in precisely the same vein, but Marley (in his comfort zone) rips it to shreds, imagining Ghana to be California, or wondering if Lagos was Las Vegas. It is also worth mentioning that DR works equally well in the car, on your headphones, zoning out in your room, whereverâ€¦ Hell, your girl will probably like it too. One track in particular that reflects this is “In His Own Words” which comes across initially as slightly too saccharin, but it is transformed once Nas opens with: “Two steps away from death, a vest and a holster/I detest detectives arresting us over/Weapons possession, they was checking the Rover/Inspecting the tattoos on my neck and my shoulderâ€¦”

“Nah Mean” is the possibly the most “hip hop” track, with a sick beat and kicks deep enough to wind your abs (one can imagine that almost all of these would work brilliantly at their live show). All the while, Marley manages that beautiful balancing act that his father perfected: enlightening without didactic bombast; detailing despair but somehow still inspiring you that everything can work out; crafty hooks that combine genius with simplicity. Saying all that, “My Generation” is the only potentially cloying moment on the album. Joss Stone, sorry to say, doesn’t deserve her place at the table (a poor guest, she doesn’t bring anything to it). As a rule, most of us tend to dislike “kids on choruses” but after a few listens it’s actually not that bad, ending up quite likeable. The verses, for once, aren’t quite up to the rest of the album, whether from Nas, Marley or Lil Wayne â€“ not bad, just a touch above average (no one “walks away” with the track). The closer “Africa Must Wake Up” has a haunting melancholy, yet Damian somehow manages to extract warmth from it all (he could probably read the lottery numbers out, he’d still be entrancing).

Never before in either genre has there been such a deeply successful collaboration album. Ever. This wasn’t supposed to happen. That it has is a testament to talent, hard work and luck. The musical/lyrical talents of the artists and producers; the sheer effort and attention that has gone into practically each individual kick and snare, (reminiscent of the meticulous late great Dilla); and the sheer cosmic luck of a focussed Nas actually turning up. If that seems facetious, understand that this hasn’t happened much over the last dozen years – on fire Nas plus brilliant music. But really, the star of the show is Marley. This feels like his baby, and he is a proud father that has nurtured “Distant Relatives”. Nas is the close family friend that you’re brought up to call “Uncle” and the backing band, your brothers. The mother? Africa. It is easy to forget, at times, the message of this opus – simply because everything else surrounding it is executed so wonderfully. But for those of us that KNOW Africa, have visited there, lived there, worked there, been the guest, servant or the master, there is a tremendous amount of emotion attached. Whilst Nas steers clear of any real analysis, he pays his own tribute, whilst Damian invokes the Marley knack of making your spirit soar â€“ they both tap into societal emotion by looking inward. Many a heart bleeds at the plight of generations of downtrodden Africans, from Ethiopia to Sudan, Zimbabwe to Zaire; yet it is rich and diverse continent that shouldn’t always be treated as the sickly child of the family. To their credit, neither Nas nor Marley come across too preachy, sure; yet they also manage not to patronise Africa, which in today’s world is no mean feat. They have brought into our lives a beautiful album, a historic one that deserves – for only the second time in my career â€“ a perfect score.