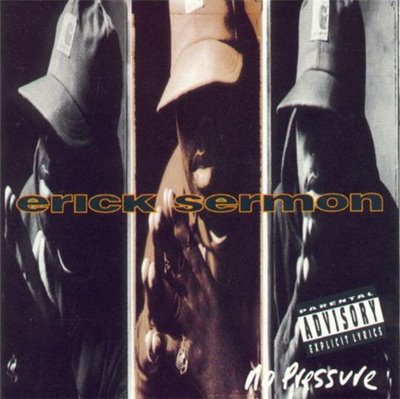 One of the marks of a true champion is his ability to handle pressure. Erick Sermon had a fair amount of pressure resting on his shoulders when it became clear that he would continue his career as a solo artist after splitting from Parrish Smith, with whom he released four gold albums in five years as EPMD. His reputation was at stake, and not just in regards to how he would fare without his former partner, but also how much a solo album might reveal about his role in the duo. Witnessing Sermon and Smith separately was seeing the fortress EPMD broken down to its components, subject to an analysis of which member had contributed to the success in what capacity. Essentially their solo careers would decide who would artistically lay legitimate claim to the EPMD legacy (and, in if they decided to surround themselves with crews, to the Hit Squad legacy).

Unlike PMD, by 1993 E was ready to roll. The rap star-studded ‘Who’s the Man’ movie offered him the appropriate entrance with the single “Hittin’ Switches.” The title stood for Erick Sermon’s relentless activity, but with all the funk in its trunk you could also interpret it as a riding anthem or a producer’s manifesto, the simple but catchy “Off and on, off and on – it’s on” hook acting as a universal slogan. Off/on – funk requires precision and at the same time the ability to let and get loose. Legions of ’80s and ’90s hip-hop producers have benefitted from the grooves laid down by the original funkateers, but what makes Erick Sermon one of the masters of his craft is that he puts in extra work when creating hip-hop beats from funk. In “Hittin’ Switches,” the Skull Snaps drums are a prominent, recognizable feature, but Sermon uses the dominant drum beat merely as the lead rhythm in a stomping, swaggering funk composition. While lyrically not rising to the occasion (respectively the promise “On the mic I cover every angle / a square, tripart to a rectangle”), he still rides the beat with absolute ease, the clear vocal tone and playful flow complimenting the neck-snapping groove.

Conceptually, the pre-album single was only the harbinger of “Stay Real.” This time using a loop from “Run’s House” as the foundation, E constructs a towering funk Autobot taking on evil Decepticons. In a nod to the beloved Zapp, an extended Roger Troutman vocal sample mellows things out, making “Stay Real” essentially a slower “Crossover,” with the rapper lobbying for real hip-hop. His arguments will not be unfamiliar to today’s fans when he disses “fake hip-hop trends,” glorifies ’80s rap and insists on a dress code:

“The Green-Eyed Bandit comin’ funky with a tune
Yes, I’m blowin’ up – like Tom Berenger in Platoon
I’m Playin’ Kinda Ruff like Zapp
Rap and double back-smack
to all the crossover raps, black
who ain’t down with the format
when you should be wearin’ khakis and not dress slacks
That’s wack
[…]
Change the outlook, change the cover of the book
you hip-hop crook, and give back what you took
It’s the funk comin’ atcha
So don’t let the crossover catch up
Boy, stay real
[…]
You must be true to the game, you understand?
Cause if not, I could kill you, man
for bein’ false plus extra fake on a tape
talkin’ hardcore when you soft like a piece of cake
You can’t put nothin’ past me that’s horrendous
cause I been here since Strictly Business
[..]
Which fake MC is rearrangin’ the structure
bein’ a motherfucker?
And don’t let this happen again
because ( *swoosh* ) rap can be gone with the wind
So stay real”

“Stay Real” followed the opener, “Payback II,” another EPMD reference that for the briefest of moments suggested Erick Sermon still needed a partner to swing when he invited Jam Master Jay signee Joe Synystr. But the guest’s free-form stylings identify him as another fresh talent Sermon intended to foster. The Atlanta-based group Shadz of Lingo, joining him on “Lil Crazy,” even got to album status a year later.

But the real find was a certain Keith Murray who appeared on the video single “Hostile.” As the stout funk rolls up with unstoppable force, an announcer introduces the main star who cautions, “For your protection, go sit in the R&B section for this session.” But the one-two punch isn’t complete until the lyrical prodigy kicks one for the history books:

“Keith Murray’s comin’ from the north, south, even left
Rhymin’ to death, makin’ the world wanna take a deep breath
With the body boom bash
My paragraph betrays the human behavior in a psychopath
Ooooh… I might lose my cool and break fool
and pull out my get-busy tools
I write like a mad journalist
to funk that’s deeper than a bottomless spliff
The most beautifullest thing in this world
is my notion for murderous poetry in motion
and the illiotic shit I come across
when releasin’ trapped air with explosive force
I push your head through the cracks of sanity
and leave your brain doin’ a bid in purgatory
It’s 96 degrees in the shade –
Before I catch blood on my blade –
I take my frustration to the stage
and get open dope with stupid bumpin’, rumpin’ tracks
When I rap my jams be packed like a laundromat
My contacts’ll wreck your whole concept
cause my delivery is so complex
And I’m intergalactic on plastic
with the super distinguish that I kick
I’m high strung at the top of my lung
with my tongue makin’ hardcore niggas wanna get dumb
My dialogue comes straight from the slum
damagin’ your medula, cerebrum and cerebellum
You got a crew, you better tell ’em”

Murray returns with his “thinking cap on backwards” for the first ever Def Squad track “Swing it Over Here,” which also marks the album’s only Redman cameo. The middle section of three posse cuts that follow back to back is “The Ill Shit,” which according to a well informed source samples not one or two but four famous funk bands and at the same time contains portions of three ’92 Lench Mob albums (“The Predator,” “Neva Again,” “Guerillas in Tha Mist”). If one rapper could relate to the pressure felt by a soloist after a split, it was Ice Cube. He had appeared with N.W.A in EPMD’s “The Big Payback” video, now he came back accompanied by acolyte KAM to assure E Double of the West Coast’s support: “Heard some new shit, what is this? / EPMD is goin’ outta business? / Goddammit, can’t leave my dog stranded / Who? The Green-Eyed Bandit…” Had the Lench Mob previously name-checked EPMD, this was a bi-coastal meeting expressing mutual respect under the banner of the funk.

But rambunctious funk is not all the Funk Lord has to offer. Decking out a thick hip-hop groove with new jack swing flashes, “The Hype” recounts an amorous adventure with a surprise ending (another throwback to the EPMD days). One of the album’s most recognizable tracks, “Safe Sex” slows swingbeat down to a comfortable tempo while the hook combines live and sampled sung vocals. Erick approaches the topic with a good mixture of informality and urgency:

“But for real, when you’re havin’ sex
no matter what type, make sure you wear the latex
Now all of the kinds out there sexin’
stop and look, boy, and stress that protection
cause AIDS is real, somethin’ to believe
and not make-believe or fake like hair weaves
a Death Wish like Charles Bronson
And if you don’t believe me, then ask Magic Johnson”

“Lil Crazy” with its fragmentary jazz trumpet set to a booming, sinister background can hang with any of the innovative sounds emerging from the West Coast during the early ’90s (Cypress Hill, The Pharcyde, Tha Alkaholiks), while the closing “All in the Mind” (co-produced by Colin Wolfe) and the CD bonus track “Female Species” (produced by Brent Turner, co-produced by Sermon) foreshadow the fragile funk productions he would perfect by the time of his second album “Double or Nothing.”

Had Erick Sermon previously acted as the playful counterpart to Parrish Smith, his appearance on “No Pressure” was more masculine. Early on one had to assume he would try to fulfill PMD’s role as well, the “Hittin’ Switches” hook being delivered in the latter’s lower vocal range. While he didn’t take it that far, the MC Grand Royal was clearly out to prove that, as he put it, he could dominate the microphone on his own. On “Do it Up” another heavy handful of rumbling and tumbling funk, he’s the “man of the hour” who jacks He-Man for his power, takes on Apollo Creed and pulls “up to your bumper with somethin’ funky / somethin’ stronger than brass monkey.” On “Erick Sermon” you have to be Superman to catch him because he’s “on a fuckin’ mission,” while he grabs his “nuts, hold ’em / because they’re golden / with more wins than Hulk Hogan.”

The uptempo “Imma Gitz Mine” was the closest performance to ’80s E Double with lines like “Gettin’ stupid / shootin’ rhymes like arrows shot by Cupid.” Erick Sermon never fit the narrow criteria for rappers that get taken serious for what they say and how they say it. That never prevented him from being a highly serious rap artist, from being a “brother with distinction” that “keep the girls blinkin’ / and have the homeboys thinkin’.” There’s no underestimating the virtue of rappers penning their own lyrics, and ED clearly wrote his, his multi-facetted yet also focused personality shining through every verse. A natural rap talent, he never ever sounds inhibited, always completely sure of himself. Lyrically, he managed to kick flavor and to put some thought into rhymes that were considered but never calculated.

When we think of Erick Sermon we remember him as one half of EPMD and for his contributions to hip-hop production. Nevertheless “No Pressure” is a very coherent album, employing a considerable amount of Atlanta talent that frequented Dallas Austin’s DARP Studios (Dr. Dre collaborator Colin Wolfe, Shadz of Lingo, Debra Killings, Derrick Culbreath). There are moments when it risks ending up a one-sided extension of “Business Never Personal,” but as a testament of Erick Sermon’s allegiance to funk and hip-hop it is a highly valuable artistic statement. They say that pressure makes diamonds. Ever the individualist, Erick Sermon showed that the creation of flawless rap music didn’t require pressure.