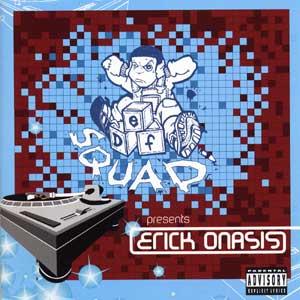 Few producers in the game today can claim to have had as much of an impact as Erick Sermon. In 1988, with the release of EPMD’s “Strictly Business”, he introduced a then-fresh style of simple, straight forward yet funky beats that became (for better or for worse), the prototype for much of hip hop. The problem with this is that most producers can’t pull this approach off and not sound boring or repetitive, and even E-Dub himself has been hard pressed to do so recently. However, after EPMD’s less-than-stellar “Out of Business”, Erick Sermon, rechristened as Erick Onasis, has had something of a rebirth. His work on Red and Meth’s “Blackout” sounded more fresh than he had in the recent past, and the same goes for the tracks we hear on “Def Squad Presents: Erick Onasis”

The first track is a somewhat obligatory “fuck y’all haters” song, but it has a dope little mafia-style loop (produced, by the way, by DJ Scratch, not Onasis), and Erick drops some pretty tight verses like “I keep shit coming from the basement / Make hardcore cats go the route that Mase went”. Still, Erick’s rather mediocre microphone skills are also displayed on this track, showing us why 11 of the 13 actual tracks on the album feature other artists.

One of the highlight cuts on this album is “Why Not” featuring Slick Rick, which was the first single. Everything on this track works exceptionally well; a vintage Sermon beat that’s simple but has undeniable headnod value, combined with one of his better verses on the album, a golden verse provided by The Ruler, and a hook taken from the Slick Rick classic “Mona Lisa” all add up to one of the tightest tracks of the year.

Speaking of singles, they did a good job of picking them: if any song on the album is as dope as “Why Not”, it’s the other single, “Focus”, featuring DJ Quik and Xzibit. Even though E-Dub is credited with the production, it sounds an awful lot like he had more than a little help from DJ Quik. Anyway, this is as bouncy and funky as a song can get, and all three rappers rip the track with a lot of fire, especially Xzibit, who drops some dope ass lines like “I fucked your mother, so now I’m the motherfucking man”.

Erick’s other east/west fusion tracks (where he trades verses with Eazy E on “So Sweet” and Too $hort on “Fat Gold Chain”) work out a little differently. While “So Sweet” is positively tight, with E-Dub’s more booming voice mixing well with the angry, high pitched energy of Eazy E. “Fat Gold Chain”, while far from being wack, isn’t a lot to get excited about.

“Ain’t Shhh to Discuss” featuring Teflon Da Don and Noah features a beat that sounds like something straight off the Youngbloodz’ album “Against Da Grain”, and you hope that Erick is this versatile, but by checking the book, you find that he didn’t produce the track. Still, it is a nice sounding “dirty south” style beat, and the lyrics aren’t spectacular, but the artists all come correct, and its a dope song regardless.

“Vangundy”, the self-proclaimed posse cut, in which Billy Billions announces he “run NY team like Van Gundy”, is a nice showcase for the lesser known members of Erick Sermon’s crew. Another vintage Sermon track gets ripped hard by: Big Kim, Sy Scott, Nolan Epps, Bo & Ruck, Billy Billions, Mr. Onasis himself, and Parrish Making Dollars, in his only appearance on the whole album.

While Erick Sermon is not DJ Premier, he is still one of the most respected producers around, if not so much for his current work, at least for his contributions to hip hop. But on “Erick Onasis”, he proves that he is still better than the majority, and his trademark, tried but true style can still be executed successfully if its done correctly. No, this is not a spectacular album, but rather a good album with a few great tracks. It is not the album of the year, but it is one of the better ones so far.