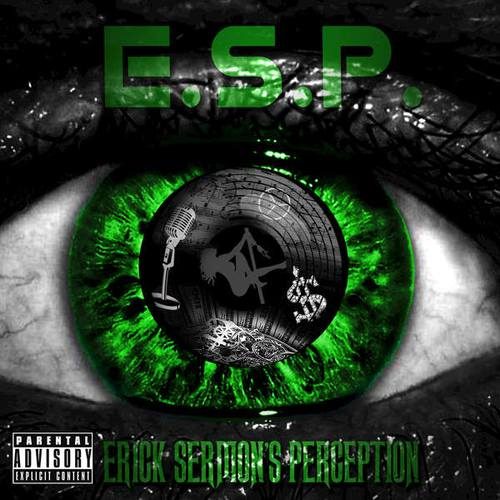 A few years back Erick Sermon hit us with his first new solo release in almost a decade, but he did so in mixtape form as a free download. It was happy news to have anything from E-Double at all given his health scare a year earlier, but surprisingly it would be three more years before we got an official retail album with major distribution. Finally after OVER a decade we’ve got a brand new official joint called “E.S.P. (Erick Sermon’s Perception).”

As a lifelong fan of EPMD nothing could make me happier than the laconic and loquacious lisp of Long Island’s finest, but as a lifelong fan of hip-hop I couldn’t help noticing that a man who I know as well for his beats as his rhymes bit an already iconic beat on the album’s very first track. Dexter Wansel’s “New Beginning” is already best known as the backdrop to “Money, Power & Respect” by The LOX, but Sermon blew the dust off for his “Sermon” and brought it back all over again.

I’m not really that mad at it. It’s not the most jacked loop in rap history, not by a long shot, and I’ll give Sermon credit for taking a longer bite of it than The LOX did and flipping it a little differently. It’s more that I was surprised that E-Double would be that obvious only one song deep. At least “Make Room” featuring Joell Ortiz and Sheek Louch didn’t rip Tha Alkaholiks.

There are plenty of collaborations throughout “E.S.P.,” which has often been a hallmark of Sermon at his best, even going back to the original EPMD albums. If there was any chance you could get tired of his slurry lisp (not that I did) you could count on Parrish Smith to tag in and hit the ropes until Sermon caught his breath on the apron for a bit. As a soloist he often relies on the friends and family he made over the years, and you’d be shocked if Method Man and Redman weren’t part of a Sermon LP either seperately or together. Happily their appearance on “Clutch” is one of the high water marks on the album.

Sermon isn’t just sticking to the tried and true formulas though. He brings in coonskin capped Jarren Benton on “Jack Move,” the gravelly Fred Da Godson on “Neva Take” and crooner Masspike Miles on “One Shot,” which is another peak on the album. This one should definitely be released as a single.

There are a few cameos that DON’T appear on “E.S.P.” that disappoint me slightly. Sermon seems to be teasing that this could be his last album, and though I’m sure he’ll get the itch again, I would have liked to see Keith Murray and the aforementioned Parrish Smith drop in for tracks if it was. There are some uneven tracks as well. “Daydreamer” starts out on a silly note as Too $hort and Sermon debate who has more money (with Sermon comically saying “I just bought Egypt!!”) but the background track sounds like a Kanye West or Just Blaze reject and the autotuned singing of the inaccurately named Voice hurts my ears. As crooners go I’d much rather have Syleena Johnson on “Serious,” but her “La-di-da-da-da-dahs” seem like a waste of her talents and the chorus doesn’t deliver either. I think Sermon was feelingly overly anxious to keep up with Krayzie Bone on “Still Getting It” and it shows. Still the misfires don’t mar the winners, like his fun duet with Faith Evans on “With You.”

The bottom line on “E.S.P.” is Erick Sermon delivers after over a decade of waiting for him to come back in an official capacity, but I suspect another decade between albums would be highly detrimental. Sermon benefits from an abundance of charisma, an underrated attribute for rappers, as some of the best wordsmiths in rap can’t make you care about a single bar they spit. Even if Sermon’s raps are occasionally simplistic, it’s that larger than life personality that keeps you invested, one which makes even basic punchlines seem funnier and more interesting. Long live E-Double.