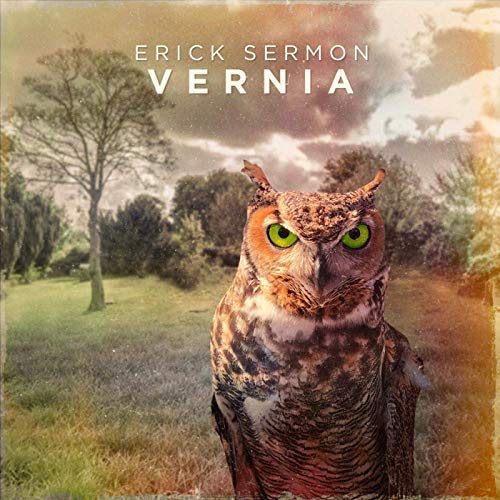 When I lived in Ypsilanti I had a University of Michigan fisherman hat solely because I was a fan of Erick Sermon. Yeah he’s the “Brother From Brentwood L.I.” and never went to school there, but I wanted to combine his sense of style with the local team I was expected to root for and support. I’m still a fan of the Detroit Red Wings for the same reason — an easy choice since there were no NHL teams where I grew up (and there still aren’t). Anyway Payne’s opening bars on Sermon’s new album “Vernia” illustrate that even 20 years after I lived there and over THIRTY years after EPMD burst onto the national scene, the fisherman hat is still associated with the Green Eyed Bandit. It’s iconic. It should be in the Hip-Hop Hall of Fame right next to the Run-D.M.C. Adidas gear, fedora hats and fat gold chains. Incidentally that fisherman hat was stolen at a house party and I never had the heart to replace it. C’est la vie.

Asking me to listen to a Sermon album is liking asking a cat to eat tuna — you don’t HAVE to ask. I’ve got a life long association with the sound of his vocal tone, the slight lisp that makes his delivery so crisp, and the heavily funkdafied tracks that he produces. There’s an inherent positive bias toward Erick Sermon that I don’t even try to deny. If anything that results in even HIGHER scrutiny when I listen to his solo albums. I have high expectations and if he falls a little short I just expect him to raise the bar and come back stronger the next time. Songs like “Tha Game” on “Vernia” reaffirm my faith. Sharing co-production on the song with Mic Checks, Sermon brings in two East coast emcees with equally distinctive vocals in AZ and Styles P for the posse song I needed but never knew I wanted.

“Hold on, wait a minute — Erick Sermon putting on a clinic”. True indeed God, true indeed. Sermon is often best served as a contributor to the song rather than having to carry the entire weight himself, mimicking the formula that made his 1980’s and 90’s songs with Parrish Smith rap classics. You can find that same chemical make up on “That Girl” featuring Big K.R.I.T. and Ricco Barrino, or “Stay Real Part 2” featuring long-time friend Keith Murray and yet another iconic NY emcee in Nature. If Sermon wasn’t firing on all four cylinders on production it wouldn’t matter who was in the vocal booth, but as he says it’s “downright disgusting” how funky he can make a track.

The most amazing thing may be that even though Keith Murray is decades removed from his debut, his delivery sounds more spastic than ever. “Everybody loves a comeback story” quips KM, and he’s got me thinking that a 2019 album produced by Sermon would be the most beautifullest thing in this world. As great as these collaborations are the biggest surprise is that when he turns a posse track over to Ty Fyffe it gets even BETTER. “Zion” gets off to a hot start with the gravelly Xzibit growling at inferior emcees: “I never believe nothin you speak, you’re not Sosa/or Scarface, you ain’t even a can of King Cobra”. Ouch! The track then drops bars from Sermon, David Banner and Shaquille O’Neal. Did you forget he raps? People clowned on him for it back in the day, but compare him to the scene in 2019 and think long and hard about how he sounds.

If I had to make any small complaint about “Vernia” it’s that more tracks like the RJ Payne intro would have been FIRE — and Sermon didn’t even produce that one so shout out to Kanzer. I always enjoy hearing newer emcees rock solo on Sermon albums, and even if they don’t go on to be rap superstars it’s all love that a legend like E Double gives them that time to rock on his LP. At least on songs like “Go” newcomers like Kaelyn Kastle and Try Bishop get to rock with veterans like Sermon & No Malice (Clipse) but who knows what more they could do for delf? Still it’s hard to grouse for long with songs like “My Style” with Noreaga & Raekwon to listen to.

If you’re looking for a classic Green Eyed Bandit style album where Erick Sermon works with many of his favorites alongside some new heads, while he produces a number of the tracks and gets strong assists on the rest (such as Boogeyman above) then “Vernia” is exactly what you’re looking for. E Double’s bars often have humorous punchlines, but in his case it’s just as much about HOW he says it as what he says. God forbid he ever gets throat cancer and loses that distinctive flow, because as far as I’m concerned he can keep doing this for a few decades more and I’ll stay locked in.