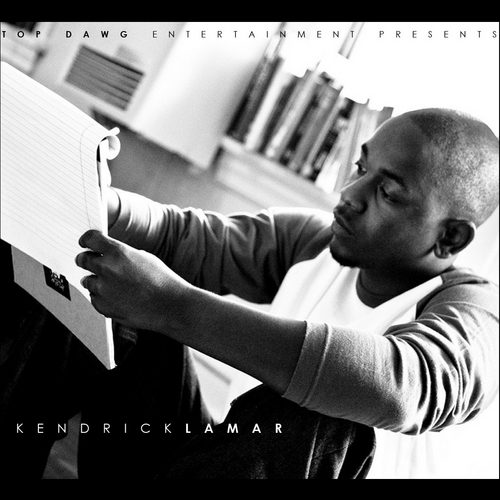 Let’s play some word association. When I say “Compton,” most people will respond with: “Gangs,” “NWA,” “Dr. Dre.” Some of the younger hip-hop fans may even throw out “The Game.” Now, going by what most people think, Compton is synonymous with gangsta rap and gangsta livin’. So when I say that my first review for RapReviews covers a young Compton cat named Kendrick Lamar, your mind might wander to blunts, beyatches, sippin’ 40s, poppin gats, and repping yo’ set.

Well, Kendrick Lamar loves the blunts, 40s and bitches, but his EP is about as gangsta as Kid Cudi’s argyle sweater. It’s not a bad thing, and it’s really apparent that Kendrick Lamar is trying very hard to push music in his own image, absent of any pigeonhole or box that critics (like myself, with word association) try to put him in. He is definitely not a cut-and-dried, paint-by-numbers Compton rapper that recycles the same talk about peelin’ caps, Kendrick Lamar is out to make his own unique footprint in the long history of Compton hip-hop.

The production on the “Kendrick Lamar EP” is mostly handled by Sounwave, fellow Top Dawg artist and Compton native, with helping hands from King Blue of Sore Losers, Insomnia, Wyldfyer, and Pete Rahk. The album gives a low-impact, low-tempo vibe that’s best served with a cold beer, an empty room, and some good headphones. Sounwave’s specialty is presenting music as an electric landscape set to a distinct hip-hop rhythm. It would be like listening to Bjork’s hoodrat cousin. Lamar’s voice drips out that Rosecrans Avenue and Crenshaw Boulevard, but he makes it bend and swerve in unique ways around each beat he comes across on the album. Once again, the theme here is to be different. “To be me,” as he would say.

The EP starts with “Is it Love” featuring Angela McCluskey and produced by Sounwave. The song starts with an array of synths, and McCluskey’s husky voice crooning out. Mr. Lamar encourages the listener “smoke to this.” Indeed. When the beat drops, we hear what Kendrick’s got:

“I used to write rhymes all day and all night
When yall was playin Playstation
My pencil was erasin lines
My conscience only knew what’s half-tight
At 3:14 it’s time to get me a slice my NIGGA
This is a dog’s fight my NIGGA
The soundtrack to life my NIGGA
Kendrick Lamar…his momma called him that
He watched House Party, and ate Apple Jacks”

Kendrick’s opening verse sounds clean, you see the flex, you see the swag, the beat is tight, and his voice rides perfectly. But the lyrics lack cohesion, and you don’t really get a sense of where he’s going with this off kilter cadence and rhyme scheme. While The Grouch never followed traditional cadence, at least he made sense and you could tell where he was going. Kendrick’s flow on this track sounds all over the place, which is a pity because his voice meshes with Sounwave’s surreal track. It’s as if the kid was gifted with a Lamborghini flow, but doesn’t even know how to drive it right.

King Blue of Sore Losers steps up to the plate with “P&P,” which is one of many Kendrick Lamar’s kickback jams. “P&P” of course, being Pussy and Patron. Club themes, but a beat that’s more reminiscent of a kickback at a homie’s apartment with a graying couch and chipped shot glasses. The highlight of this track is the versatility you see from Mr. Lamar. He starts off the track with a nonchalant tone and an effortless flow, until the snares bring out the pitbull in his voice:

“Guilty by association story of my life NIGGA
You gon make me flip this
Split yo shit, judge give me life NIGGA
Pain since my grandmom’s death
Uncle killed at Louie’s Burgers
Hold my tears and try my best
Let it go, trench my pullover”

The strength of Kendrick’s flow is his ability to adapt and ride the beat in creative ways. His voice and delivery just know how to provide the best sound to complement the rhythm and the melody of the track. Kendrick Lamar is the producer’s MC, and can bring the best out of any beat he’s given. And the beats are knockin’, “P&P” plunks over xylophones to complement the sharp and measured drumline, “Trip” picks up the pace with a continuous synth loop running over a quick trail mix of percussion. Rapper Big Pooh is in the building for “Thanksgiving,” and lays some game on the track with Wyldfyr’s big horns blasting in the background:

“It’s evident that I’m evidently a favorite
All I ask, open ya ears and please savor it
And taste is unacquired, quietly been inspired
I’m at a point in my life when I was gettin’ tired
Now I’m brushin off the dust
We don’t need no water, fire burnt it to the dust
Niggas ground hard and just turned it into mush
People got the pain, I consider it a plus”

It’s safe to say that Kendrick gets lyrically upstaged by the more seasoned Big Pooh, but he manages to keep his presence large enough with his delivery and flow. The track is a nice upper in an album full of laid back vibes.

In all the “Kendrick Lamar EP” is a good introduction to a hungry artist that has all the raw talent to succeed. It won’t be the best lyrics you’ll ever hear. The beats are great, but they’re not classic. It’s different, but it’s also not that trailblazing. What really wraps this release is the raw flow of Kendrick Lamar. This kid has swag in spades, and if he just learns how to write a song, Kendrick Lamar might be the first image in your head when I say “Compton.”