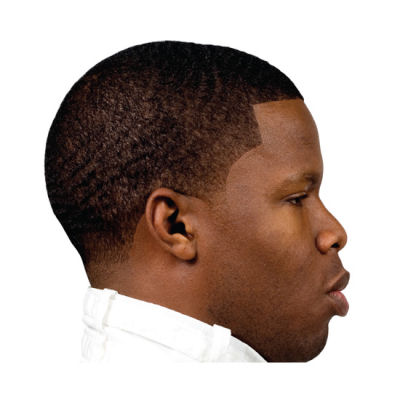 He may not have a lifetime supply of Colt 45 back at his crib, or have ever been frozen in carbonite, but Billy Drease Williams (formerly Edreys) has his own unique brand of cool, most notably that it’s cool to create a style of hip-hop that anyone can relate to. The Buffalo native will be releasing his latest effort, Good Morning Amy

, on June 22nd, and this week RapReviews caught up with him to find out more about who Amy is, the very unusual audience the album was tested on, and why dog poop has become such a big part of his life. Don’t worry, we also talked about hip-hop. I swear!

Adam Bernard: Let’s start things off by discussing your name change. Have you completely dropped the Edreys name from your work? Are you now officially going by Billy Drease Williams at all times, or is this simply one persona you have?

Billy Drease Williams: That’s at all times, outside of personal life. Entertainment wise, people call me Billy now, it’s official. Tone (founder of DeepThinka Records) and I, we didn’t know when to make that change, so even with the Good Evening Billy joint we said let’s put Edreys aka Billy Drease Williams. It was a slow process, but that’s the name now. For me, Billy Drease came as a joke. My man Dre was crakin on me, we alter each other names. I call him Dremaine Dupri, because he’s always tryin to produce something for me, so he was like “you big Billy Drease Wiliams,” and I said I like that. What made sense for me to do it is, PR wise, nobody can spell Edreys. It’s only six letters but nobody can spell it right off the noggin. Drease was my nickname when I was a kid, and Billy Drease Williams has so much more of a flow and a ring to it. It made it more fun, and if I’m not having fun doing this what’s the sense?

AB: Has Billy Dee Williams been in touch? Maybe to discuss Star Wars over an ice cold Colt 45?

BDW: Nah. I thought about that like you know what, if it comes down to even remotely close to that exposure, I’ll cut off the Williams, cuz I’m still Billy Drease. Then I’m like, now what!

AB: He doesn’t seem like the kind of dude who would get real bent out of shape.

BDW: Did you know he’s an artist, like a painter? Billy Dee Williams is a painter, but he’s such an OG now, I don’t know if he can name a rapper at this point.

AB: If he Googles himself he’ll certainly find out.

, is due out June 22nd. Tell me a little bit about Amy. Who is she, or is Amy more of a concept than a person?

BDW: Amy is very much a concept. The whole way that Good Morning Amy began is a year and half ago we started brainstorming on how to, on an indie level, make a difference, make a shift in the tide, and really come out of Buffalo, with very little resources. We started thinking large and meeting every Saturday or Sunday morning really early, like six or seven o’clock in the morning, at this place called Amy’s Place. We met, built, put things together. We’d always start every meeting with “good morning” and “yeah, whatever, we’re here crazy early,” and it just kind of came to me, Good Morning Amy. At first it was just a name that I thought was dope. It was very far from a rap album name, which is what I liked most about it. It could be a rock band, it could be a jazz title. After a while the Amy part became an acronym for After Many Years because a lot of people that know me know that I’ve been doing music for quite a while now, well over ten years, and Tone has been doing it for a while, too. Good morning is symbolic of a change, it’s something different, a new beginning, a new start, a fresh, clean, state, so it just made a lot of sense; Good Morning After Many Years.

AB: What do you think music fans will get from Good Morning Amy

that they don’t get from anything else that’s out today?

BDW: There’s a subtitle to all of this and it’s “the conceptual sound of inspiration.” That’s what the thread and the whole overtone, or undertone, is. It’s all inspirational, and I’m not talking inspiration in the sense of that “do right, don’t do the wrong” thing. It’s like, today is a good day. I got a song on there called “I’m Good,” “no matter what my day is like ain’t nuttin gonna bring me down tonight.” The lyrical content isn’t preachy, it’s just about uplift, it’s about starting anew, taking another shot at something and not giving up at whatever your dream is. We want people to find their Amy. Amy is whatever inspires you to get up every day, whatever inspires you to chase after something. Whatever it is that motivates you, that’s your Amy, so go get that Amy. The album is 13 tracks and one is a remix. Throughout the whole thing I intend for it to be very inspirational. The conceptual sound of inspiration. So if somebody says what does inspiration sound like, I would hope that they would say Good Morning Amy.

AB: I’m glad you noted that it’s not preachy because I think there’s a misconception that if an emcee isn’t killing people, selling drugs, or saying bitch then he’s automatically being preachy. It’s like no, just because you’re not preaching evil doesn’t mean you’re being preachy.

BDW: You know what, it’s good music, man, that’s all I want to convey. Let me put it like this, the most feedback I’ve been getting has been from people who are totally not on our scope or our radar. I’m talking 60 year old retired white women. My mother just told me they were working out in her yoga class to the song “I’m Good.” These are all 65 and older people telling me they don’t listen to rap, but this is a nice take, it’s a nice swing. The sky’s the limit. It’s a cliche, but it really is. I have no boundaries for this album or who’s gonna accept it.

BDW: I’m stealin other rappers’ moms. I’d rather take that than their hoes. Moms got jobs. {*laughs*} And social security!

AB: You’re also a visual artist and did all the album art yourself.

BDW: That was exciting and at the same time it was grueling because even up until now I’ve never had a chance to detach fully from the album. Most artists will record all their tracks, deliver them to the engineer, and just take some photos and wait to see the packaging. I sat there for hours and hours, endless nights of no sleep, tweaking it, drawing it, copy proofing it between me and Tone. It’s been crazy, but it’s cool because I think this is what independent should be about, you should have complete control over your product.

AB: How much more do you want people to buy the album rather than simply download it since you have your artwork included with it as well as the music?

BDW: Man, I would love for people to do both, but I think just for a keepsake, I think that people who actually buy the physical, I think it will mean so much more because they’re getting a piece of artwork, which is kind of nostalgic. For us growing up, from the era we came from, we would buy an album and open it up. We would live to buy a vinyl or a tape and open it up and fold that thing all the way out and read it, and that’s what I really wanted to do. It made me feel back to my roots, and the lyrics are in it, too. So I’d rather they buy the physical, but I won’t protest, a sale’s a sale.

AB: Hailing from Buffalo, the closest musical Mecca you’re near is Toronto. This makes me think you have some unique ideas when it comes to distribution and promotion. What have you found to be some of the more interesting avenues for getting your music out there?

BDW: Actually, I’m still learning that. What I can tell you is that I have kind of put blinders on to what normally works. Between Tone and I, we looked at everything we’ve done in the past, everything other people have done, and we’ve totally shut our minds off of that, because that’s like Michael Jordan shooting a jump shot in his sleep. We know we can do that stuff, we know we can do the standards, we know we can do the typical expected moves. I’m tryin to look into licensing. Aloe Blacc has some good placement on HBO. I’m trying to do stuff like that. You got people watching network television and all kinds of things like that by the millions. I’d rather license my work that way, so people will hear it weekly and then learn about Billy Drease. One of the other ways we want to market this album is kind of like Tony Robbins, that dude is like the inspirational guru type. Not that it’s gonna change anybody’s life, but I would like to think that it would change their musical pallet, to see the fusion between good rhymes, clean rhymes all the way through, and some dope production. We haven’t figured it all out quite yet, but I’m definitely going to go unconventional. If it’s taking off in yoga places you’ll see Billy Drease yoga mats. I’m looking for the most unconventional way to break through.

AB: Speaking of unconventional, when no one’s looking, what does Billy Drease do, or sing?

BDW: Nothing too embarrassing. I’m a pretty boring guy. I like watching UFC. One uncool rapper thing I do is I drink lots of tea. I like tea. I don’t pop Cristal or Moet. I don’t do any cool rapper stuff. Outside of taking care of the kids, I coach a lot of sports, but everybody’s still looking.

AB: Fair enough. Finally, who’s dog are you holding on the cover of the album?

BDW: That is my dog. He’s a Pomeranian Schnauzer. His name is Max and at that time he was probably about four months old. He turned out to be alright, and that helps me out a lot by you asking that question because one of the things I’m always doing when people aren’t looking is cleaning up after the damned dog. That’s what I do when no one’s looking, clean up poop.