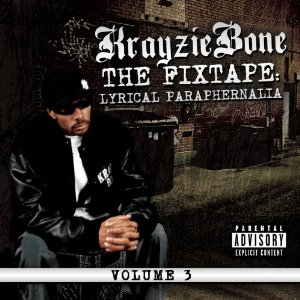 One thing needs to be clarified right at the start of this review – it would be a mistake to call any of Krayzie Bone’s volumes of “The Fixtape” a mixtape. The old school definition of mixtape was a handmade and mixed compilation of hot tracks and local rapper freestyles, often set to borrowed (unauthorized) beats, sold hand to hand on the streets. The new school definition of mixtape is a digitally distributed zip folder of tracks that follows a similar formula, although in this day and age they’re often given away free to promote an upcoming commercial release in stores and on iTunes. Either way “mixtapes” were in general not something you could buy through chain retail stores, although some big name DJ’s like Clue, Funkmaster Flex and Tony Touch inked major label record deals and got sanitized “mixtapes” into Best Buy and Target. That said “mixtape” still implies something you can’t buy in stores even in 2010. That’s not true of “The Fixtape” releases though – RBC Records is making sure you can get these Krayzie Bone albums (and that’s what they really are) at all retail outlets everywhere.

The press kit that came with my copy of “Volume 3” was somewhat spartan, but it does promote a June 1st release date. Amazon.com

disagrees and suggests this one is coming out on July 27th, two weeks after this review. Ironically the promo CD is a little bit more like an old school mixtape from the mid-1990’s – it comes in a slimline case with no cover art and the rapper’s name printed in block letters with plain black ink. We did track down the artwork for this review but there’s not much to say about it – Krayzie’s sitting in an alleyway full of dumpsters. Exciting. If it’s meant to convey the gritty atmosphere of Cleveland though, job well done. While the album was recorded well before King James decided to pack up his bags and set sail for Miami, there’s a dark depression found within this Bone’s thuggery that goes far beyond the failures of a local sports team.

“I might get violent in here – my baby momma wanted child support
This chick be trippin every time in court
Uh-uh! Don’t you press that panic button, don’t you make me hand you somethin
Don’t wanna be the one that take your life, not I
Dear Father, my mind’s goin insane
It’s gettin harder, impossible to maintain
Maybe I should just end it all myself
But then how would that help?
[…]
I ain’t tryin to be a killer, I’m playin the role
in the movie of life, but it’s out of control
Lord what have I become, what have I done?”

Throughout the years Krayzie Bone has consistently been one of the most lyrically introspective members of Bone Thugs-N-Harmony, and his cult following has expanded even as he’s grown increasingly weary of the trappings of fame and fortune. It’s impossible to ignore the dark nihilistic sound of “Suicide” even if that wasn’t the song’s title and chorus. Krayzie describes himself in the bleakest terms, professing he has “the swagger of a walking dead man” then calmly stating “lately I’ve been thinking about taking my own life.” This is not a panicked frantic confession – he states very matter of factly that he’s “done with even trying” and “sick of living here” as though he’s considered the matter hundreds of times already. To be honest it’s a little chilling, which is undoubtedly the effect Krayzie was going for – disturbing listeners by how wholly he accepts the darkness of his own mind. That makes the parody of Nas’ “One Mic” which Krayzie calls “One Life” much more wry given they are put back to back on the disc. Still even here Krayzie croons a sorrowful tale where daddy only hugs his children when he’s high, and mom doesn’t give a damn about the kids because she’s only using them to collect welfare. Shit is grim y’all.

Despite the grim world Krayzie dwells in on “Fixtape Volume 3: Lyrical Paraphernalia,” his new solo album is surprisingly enjoyable. It’s a master stroke to revamp the 1980’s and invite Bone comrades to join him on “My Street Blues,” sounding like any classic song from their days of yesteryear. The troubled rapper finds solace in the electronic melodies of “Let it All Go” too, sing-song flowing his way out of the difficulties in his life and turning all his problems over to God. “Whatcha Gon’ Do For Me” is as much a question for his female companions as it is for himself – unwilling to be “played like Monopoly” while “collapsing my economy” – wondering over the synths, pianos and drums why he can’t find a more supportive down ass woman. Krayzie is still down to hustle by any means necessary, grooving to classic funk all while he’s out to “Scrape the Block” for every last dollar he can get on a “solo rap for dolo.” If there’s any downside to “Fixtape Volume 3” it’s that it’s a little too short. The tale of hustle, sorrow and redemption Krayzie Bone tells here could have been an entire novel, but this is more like a novella. Hopefully he’ll continue to let the sun shine in and not let depression convince him that suicide is the answer – even if he’s acting it’s a very convincing act.