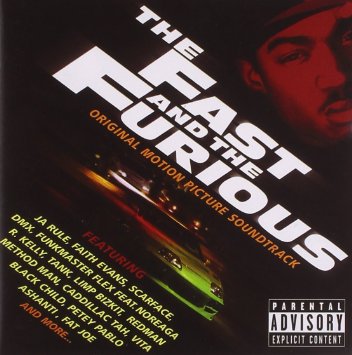 Various Artists :: The Fast and the Furious Soundtrack

Produced by self-described “crime boss” Irv Gotti and featuring self-described “murderer” Ja Rule throughout, this soundtrack and debut record for the Murder Inc. Records imprint is their family affair. If Ja Rule were to release a “presenting my dogs” record, this would be the one – and they largely do him justice on it.

This album starts out very strongly on two high notes – first the “Good Life Remix” from Faith Evans featuring all of Ja Rule’s fellow Murderers dropping cameo verses; and then member Caddillac Tah (formerly Tah Murdah) on the bangin’ beeper sounds of “Pov City Anthem.” Mr. Fingaz and Irv Gotti have a sadistic hit on their hands with this cut – once you hear it you can’t get it the FUCK out of your head. I suspect people coast to coast are reprogramming their cell phones trying to reproduce the electronic notes that form the basis for Tah’s energetic big baller anthem.

For those who aren’t too into R&B music, the album does slow down a bit at this point with Ashanti’s “When a Man Does Wrong” and Tank’s “Race Against Time Part 2” featuring Ja Rule. Of the two the latter is a clear winner and not just because of Ja’s verse – Tank’s delivery is energetic and animated where Ashanti just comes off as another run-of-the-mill slow jam/quiet storm artist. The following song “Furious” does feature energetic flows from Rule and fam, but Dat Nigga Reb’s beat is too simplistic and uninspiring to generate any interest – just being fast and having a bassline isn’t enough. The mostly more mellow part of the album closes out with a nicely produced and sung R. Kelly jam called “Take My Time Tonight.” It’s a throwaway in a sense – good enough for anybody who already likes him, but not a track that will generate new legions of converts.

The album gets back some octane with the menacing Scarface track “Suicide.” This seriously underrated rapper continues to show the skills that make him just as relevant in the 21st century as he was in the 1980’s when he was better known as Akshun:

“I took my chances, but I did my dirt
And my advice to any nigga if you grind then you do what works
Just get enough and step the fuck back
Cause in this game you get fame
you gotta start thumpin these niggaz off your nutsac”

Taking a cue from DMX, Murderer member Black Child drops a song called “The Prayer” but comes across with less sincerity that to some may in fact be offensive. Although his faith sounds believable with the rhyme “If killin niggaz is wrong, God forgive me for my sins” at the start, he shows no remorse latter when he raps, “The Lord is my shepherd and the gun’s my weapon […] nigga we lust to bust, in guns we trust.” So what does Black Child believe in, guns or God? Even a non-practicing Christian or atheist will find his raps confusing. It sounds like the only thing Black Child believes in is killing anybody who gets in his way; and he should just leave God out of it. Noreaga has no spiritual problems on “Tudunn Tudunn Tudunn” with Funkmaster Flex – he bangs mercilessly to “take a nigga hockey mask off like Jason.” Such thugged out behavior is usually Nore’s calling card, but unfortunately SPKilla’s beat sounds like an uninspired throwaway from a Busta Rhymes album and even the usually hyped up rapper seems to have failed to find inspiration in it.

This soundtrack does seem to find fresh life and new direction whenever it loses ground, and the brutally vivid “Hustlin'” by Fat Joe and Armageddon would do the late Christopher Rios (Big Pun) proud. Rappers Boo and Gotti, best known as the Rockland all-stars on R. Kelly’s “Fiesta (Remix)” have a short but entertaining “Freestyle” immediately afterwards; rapping over the beats to Dr. Dre’s “The Watcher” and “Fuck You” in succession. To keep the energy going, the soundtrack’s producers inserted Limp Bizkit’s “Rollin’ (Urban Assault Vehicle)” – possibly the best and most likeably hip-hop song from Fred Durst since “N 2 Gether Now.” No surprise that Method Man is on both tracks; although this time he gets more than credible assistance from fellow weedhead Redman and the quintessential big dog of hip-hop, DMX. The latter takes self-depraved nihilism to levels even Tupac would’ve found impressive:

“A tisket, a tasket, I really need my ass kicked
My moms never let me forget, that I’m a bastard
I ain’t never been shit (UHH) and ain’t gon’ be shit (UHH)
That’s why I take shit (UHH) whenever I see shit (UHH)
It’s just that D shit, D’s short for do-what-I-wanna-do
And that’s what I’m gonna do, right here in front of you
And I be runnin you and your man straight up out
While y’all niggaz ain’t runnin a FUCKIN thing but yo’ mouth”

The album rolls on strongly with the up-tempo Ja Rule song “Life Ain’t a Game” and the Shade Sheist duet with Nate Dogg “Cali Diseaz” which will make the latter’s fans want to say “hey heyyy-ayyy, smoke weed everyday.” North Carolina sensation Petey Pablo throws in the cut “Didn’t I” and although it doesn’t have the crossover hit potential of “Raise Up” it’s still a respectable track. Almost as a bonus the soundtrack’s producers threw on the well worn radio hit “Put it On Me (Remix)” featuring Lil’ Mo, and closed the album with a cover version of Madonna’s “Justify My Love” by Vita featuring Ashanti. Of course, the irony here is that Madonna sampled Public Enemy’s “Security of the First World” on the original; but only music historians or readers of this review will realize it.

Despite being relatively uneven and occasionally dissapointing, this soundtrack still has a very grimy hip-hop sound and feel and almost achieves the rare feat of being a rap movie score from start to end. Given the big revs the engines of muscle cars in the film itself it only makes sense to match that with raps and tracks that can peel rubber and burn up clubs, rides, and dancefloors. The hits make this one worth owning and thanks to digital technology the misses are easy enough to skip over. With a few less songs to skip over, it might have even made the rap soundtrack top 10; but suffice it to say it’s definitely “better than average” in this too small category.