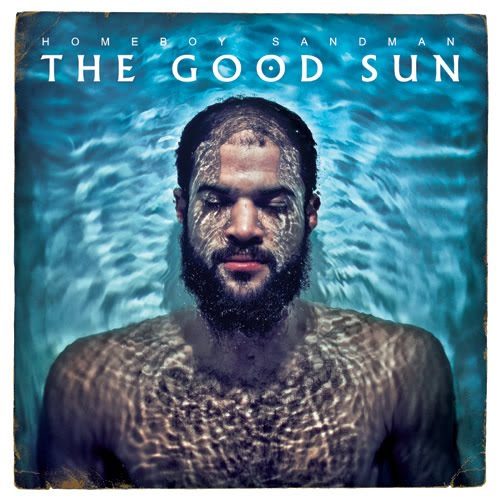 I first heard about Queens MC Homeboy Sandman when his second self-released album, 2008’s “Actual Factual Pterodactyl,” generated buzz. His complicated wordplay and non-traditional subject matter earned him critical praise, including being named album of the year by our own Adam Bernard, and a feature in the Source’s “Unsigned Hype” column. He was flying pretty low under the radar though, so much so that this site never reviewed his two previous albums, and I never got around to listening to either of them. That’s a deficiency I aim to correct with his new album, “The Good Sun.”

Homeboy says it himself – he’s not a backpacker, he’s not a gangsta rapper, he’s not a swagger rapper. He’s his own thing, which makes him hard to pigeonhole and perhaps hard for him to find his niche in the hip hop landscape. He is most definitely a talented rapper. He spits fast and furious, peeling out rhymes in a relentless, unending barrage. “You want me to dumb it down? I want you to smarten up,” he advises, making it clear that he isn’t going to simplify his rhymes to get a bigger audience.

His bio says that he was sold on hip hop after buying DJ Jazzy Jeff and the Fresh Prince’s “He’s the DJ, I’m the Rapper.” “Cats slept because Fresh Prince was comfortable having fun,” Homeboy writes. ” Sad how cats should sleep because of such a thing. Such slumber is prevalent even to this day.” “The Good Sun” is in many ways the legacy of “He’s the DJ, I’m the Rapper,” only with twenty-five years of development and growth. Like the young Will Smith, Homeboy has the same sense of easygoing fun, making his complicated rhymes sound deceptively simple. Homeboy’s music is hip hop at its pure essence, stripped of the glitz, the glamour, and the posturing. If hip hop had developed on a trajectory where microphone skills trumped image and swagger, Homeboy Sandman would be the result.

Homeboy is backed by a solid production team that includes Core Rhythm, 2 Hungry Bros, Ski Beatz, M Slago, Psycho Les, Ben Grymm, KO Beats, Thieven’ Steven, The Mastadon, J57, and DJ Spinna. Despite the eleven different producers involved, the finished product has a unified feel. The drums are intricate and front and center, as if they were programmed by a drummer.  This backbeat provides a strong foundation for Homeboy’s rhymes. The combination of Homeboy’s hyperliterate rapping and the banging beats makes for a very enjoyable listening experience.

High points of the album include the spy soundtrack feel of 2 Hungry Bros’ “The Carpenter,” Core Rhythm’s drumfill beat on “Not Pop,” the flipped organs on M Slago’s “Table Cloth,” and DJ Spinna’s Bollywood-influenced beat on “Being Haved.” While Homeboy Sandman’s signature sound is uptempo and frenetic, he also slows it down on the introspective “Calm Tornado” and “Strange Planet.” The album ends with the powerful “Angels With Dirty Faces,” about homelessness. Homeboy tackles his conflicting feelings about helping out a homeless man, balancing his own selfishness with the reality of the situation:

“Next man wouldn’t spare his, why should I spare mine
Call it the New York state of mind but bear in mind
I know he’s in a bind but he’s just going to buy beer and wine
I’m working a nine to five trying to provide for me and mine”

I’m loving “The Good Sun.” Homeboy Sandman spins intricate, clever rhymes, mixing in nuggets of knowledge with a healthy dose of humor. He’s not unlike Eminem, only with less angst and dysfunction and zero cursing. The beats are good throughout, and there was only one track (“Listen”) that I wasn’t feeling. Bask in the glow of “The Good Sun” and stop sleeping on Homeboy Sandman.