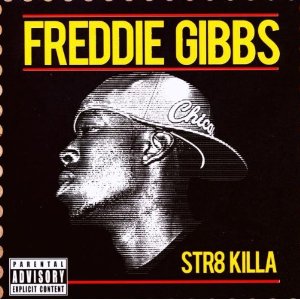 Of this year’s crop of emerging hip hop artists that were named as XXL’s 10 Freshmen for ’10, Freddie Gibbs is not the most talented wordsmith (J. Cole, by some measure), nor the most comfortable with penning hooks (Wiz Khalifa or, perhaps, Donnis), and certainly not the most memorable of the bunch (OJ Da Juiceman, albeit for all the wrong reasons). More so than most emcees, especially fledgling ones, Gibbs requires some work on the behalf of the listener. That is not to say that his music isn’t superficially enjoyableâ€”aligning himself with â€˜Bama super-producer team Block Beattaz and CunninLynguists’ Kno is more than enough to make that out of the questionâ€”but Gibbs’ flow is an unassuming creature, one that deftly adjusts from Motown multisyllabic patterns to a sonorous, slow flow on any given pair of tracks, sometimes even within a single verse. He is not, however, blessed with a terribly distinctive voice, and it’s very easy to listen to his music without actually hearing what he’s saying.

The Midwestern emcee, effectively representing Gary, Indiana by himself, released two acclaimed mixtapes in 2009 after being aborted by Interscope before even dropping a debut album. These tapes and a string of guest verses (e.g., CunninLynguists’ “Strange Journey Vol. II”) helped him receive XXL recognition and this month he released his latest mixtape, “Str8 Killa No Filla” along with his first official EP, “Str8 Killa,” which borrows six of its eight tracks from the former tape. In this sense, “No Filla” applies more accurately to the EP than the tape (Gibbs’ choices for the condensed release display good judgment), but I digress.

Even in its pared down form, “Str8 Killa” is as long as many hip hop albums, or at least as most should be. Just looking at the track list, you can immediately understand why Gibbs has been compared to Tupac Shakurâ€”the song titles are platitudinous even for gangster rap: “Live by the Game,” “Rep 2 the Fullest,” “National Anthem (Fuck the World)” and so forth. But like Shakur, Gibbs’ hooks are all about conviction, and the EP’s bestâ€””National Anthem”â€”combines distant flutes and raw power to make the general feel awfully specific. There’s no reason to believe he has it in him to write anything that’ll get him national radio circulation (“I’m screamin FUCK the world” ? “I might say â€˜hi,’ and they might say â€˜hey!'”), but his choruses are anything but glib.

On “Rep 2 the Fullest,” Gibbs gets a chance to rap alongside fellow Freshman Jay Rock and takes advantage, opening with “Never ever been on my level, fuck with Fred you face to face with the devil // Raise hell to raise my funds up bitch I was raisin’ the ghetto” and skillfully changing gears whereas Jay Rock struggles to find his bearings over DJ Burn one and B-Flat Trax’s intricate, volatile production. And it’s not a high-profile record by an up-and-coming rapper if Bun B doesn’t show up somewhereâ€”twice in this case, the better collaboration of which is “Rock Bottom,” which offers the most personal and arguably most substantial verses on the EP. “Now they say you in a calmer place, I couldn’t tell by the looks on ya momma’s face,” Gibbs spits with unceasing apathy. Bun B innocuously fills in the space between Freddie’s verses, but his presence here is somewhat bewildering. However, the Texan adds a lift while batting clean up on the drowsy posse cut “Oil Money,” which also features The Cool Kids’ Chuck Inglish and KiD CuDi’s bff Chip Tha Ripper. But if not here, then on the EP as a whole, Freddie Gibbs is clearly in command, fully aware of his own potential and self-assured that if we don’t get it nowâ€¦we’ll catch up eventually.