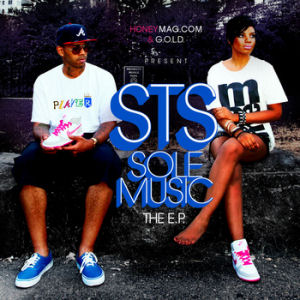 STS (formerly Sugar Tongue Slim) saw his hype surge in the past few months thanks entirely to his two spots on the year’s preeminent release, The Roots’ “How I Got Over”â€”putting him in cahoots with lionized emcees Phonte and Blu. Not to mention, The Roots rival Jay-Z and Kanye in their ability to put on up-and-coming artists, from Beanie Sigel and Eve on “Things Fall Apart” to Wale on “Rising Down.” That being said, the Philly-via-Atlanta rapper’s 16 bars of fame were, if anything, unspectacularly solid; his stilted flow and harsh vocals recall another of Black Thought’s comrades, Peedi Crakk, but not nearly as captivating.

Presumably hoping to capitalize on his sudden thrust into hip hop’s consciousness, STS put together a collection of new tracks to support “Sole Music,” his single from April’s mixtape “Demand More II.” The titular song is a pleasantly quixotic love song to women and sneakers, sporting wood block percussion and a piano chord that’s rudely interrupted by a lame “-izz” incorporated chorus. The EP also includes a slightly shorter, superior remix with Tanya Morgan’s Donwill, who is audibly at home over this kind of beat. When STS sticks to this formula of sweeping, elegant production, “The Sole Music EP” makes for solid, laid-back hip hop. “Brown Babies” and “Oniomania” continue this theme with measured success, affable particularly because of STS’ earnest treatment of less-than-so subjects (the latter song title being the technical term for compulsive shopping).

The record’s mood is swiftly vaporized by a strange, grating serenade to Solange, though, and the forgettable, synth-heavy “Is You With Me?” These songs lay bare the emcee’s limitations, especially the hoarseness of his singing voice that only partially worked on The Roots’ “Hustla” because it was competing with a fucking baby’s sobbing. You’d be hard-pressed to find any sign of Sigel-esque potential here, but it’s a minor success of a minor concept.