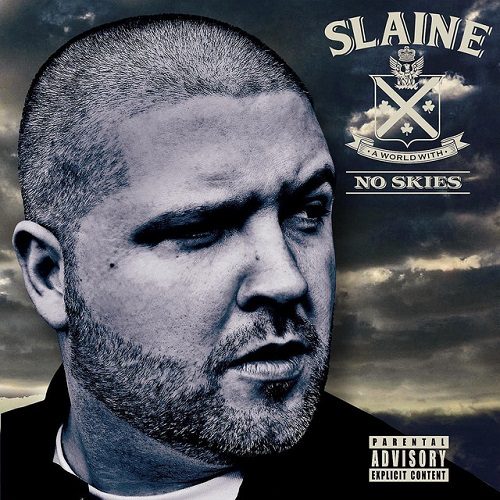 Slaine :: A World With No Skies

George ‘Slaine’ Carroll is nothing if not outspoken about hip-hop, as passionate about the arts as he is about his Boston roots and New York City rap career. It’s a passion that was almost derailed in 2003 by cocaine abuse, one of many vices available to up-and-coming artists that pulls them right back down into the gutter. Fortunately for Slaine a 72 hour binge that led to a stint in a Roxbury detox center was the wake-up call that he needed to get his life in order. Some men would be broken after being abandoned by their family, their friends and their girl but in Slaine’s case the isolation wound up being the steel that sharpened steel and gave him focus. In Slaine’s 12 step program, step one was finding like-minded Irish-born hip-hop artists to bring his voice to light. Founding House of Pain members DJ Lethal and Danny Boy saw the talent and potential despite Slaine’s troubled past, and offered him the chance to drop a mixtape telling his life story.

The mixtape exposure led to Slaine being part of now renowned underground Boston group Special Teamz, which in turn led to him being part of UBER-supergroup La Coka Nostra. Slaine wound up getting acting gigs in Ben Affleck movies, calling out other Boston rappers for being phony, and leaking singles to the internet and radio through Suburban Noize Records. For some drug addicts having that much success in that short an amount of time would lead to relapse. After all it’s easier to convince yourself not to abuse drugs when you don’t have fortune and fame – when the money’s flowing and everybody wants to do you favors it’s easy to get high as a kite any time you like. Slaine is on a mission though now that he’s got his head on straight, and his passion for hip-hop is his only drug of choice.

Unfortunately that passion led to him recording a lot of songs without getting the samples cleared first, which has caused “A World With No Skies” to be pushed back numerous times. Though the album is now slated for a February 2011 drop date, hearing “Voices of Apocalypse” made me instantly realize the problem for Slaine – the song rocks the same eerie loop The High & Mighty did on “The Half” over a decade ago. It’s one thing to bust a rap to it when your name is Mr. Eon and your record label (Eastern Conference) went out of existence years ago. It’s entirely another when your name is Slaine, you’re signed to Suburban Noize, and you’ve been in two Hollywood motion pictures. People are going to COME AT YOU for a fucking grip of money to make sure each and every note you spit over is either (A.) original or (B.) well paid for. Hopefully this one did get final approval – as much as I enjoyed Eon’s slow flow on the original Slaine and DJ Lethal really take this to a whole new level. This entire song is paranoia personified:

“The Devil here he comes, lurkin in the drums
Workin with the moves he keeps a serpent with his tongue
Snake up in the grass who’s as merciless as him
I am of none, nobody else, no one
Percocets and rum, circle him and run
The lion’s out his cage and the circus isn’t done
It’s only just begun, I’m in a dark place
There’s somethin in my blood that’s makin my heart race
… I think I’m goin crazy
Keep thinkin people wanna grave me, body me
Probably mean, this insanity is gonna swallow me
Forget it you don’t understand man you don’t follow me
Some people wanna see me dead
That’s why I keep a .45 under my bed
There’s no sun, just rain and thunder instead
Look what this sick world has to done to my head!”

It’s not surprising that a rapper who declares that he lives in “A World With No Skies” would be darker than the average, but the leaked single “99 Bottles” is actually a funny and upbeat DMatic production where Slaine belches, throws shouts out to Everlast (“I’ll serve your ass like John McEnroe”) and gets totally lyrically inebriated while making fun of himself at the same time:

“She asked 99 times for a sixty-nine
And loves how I rhyme with a shifty mind
I told her 99 times that the shit was mine
Back in ninety-eight the bitch was one sip behind
And if I don’t make it I’ma switch to crime
But I’m leanin real hard on this gift of mine
Wouldn’t you if you were, spittin so sewer?
Strawberry blunts with the milk and Kahlua
… You’re like “What’s he think?”
Cause a milk and Kahlua is a pussy drink
What’s a dime piece worth if her pussy stinks?
I have been knocked down and pushed to the brink
I stick with the reek cause I reek of the stink
So come and take a whiff when I speak what I think
I roll up in the club, take a leak in the sink
then I bounce from the spot with a freak in a mink
99 bottles of beer on the wall
99 problems and you’re hearin ’em all”

It’s that self-effacing humor and penchant for punchlines that keep Slaine’s album from going so dark it turns dreary and depressing. Still there’s no mistaking the intent behind songs like “When I Shoot You” and “Insomnia,” not to mention the Biblical implications of “Body of Christ,” “Ghosts” and “The Last Song” featuring Everlast all coming back to back. Still for apocalyptic terroristic rapping there’s at least one man who makes Slaine look like a ray of sunshine by comparison and that’s Vinnie Paz. Coming in over a Hirolla track punctuated by Common samples and joined by Reef the Lost Cauze, the “Landscapes” they see are darker than “Black Helicopters” patrolling the sky. Peep the nastiness of Paz in particular:

“I rose above everything they threw at the kid
Pops dead, no fuckin bread, doin a bid
I had a choice I could rhyme or put two in your wig
Cause an option for me was never pursuin a gig
Yeah, I made demos they spit in my face, begin again
I started having reservations like an Indian
I’m a man of God but I started to sin again
Cause muh’fuckers were sleepin on me like lithium
It’s a lot of years later, I’m still nice with the hands
I’m a dick to my people, but I’m nice to the fans
Some other rappers talk shit but they rightfully stand
Dig in the same fuckin place where they rightfully stand”

Production helps the extra rugged Slaine from going too far in Vinnie’s direction. Statik Selektah lightens the mood with symphonic strings and scratches on “Mistaken Identity,” makes the drums and harmonies extra crispy on “Night After Night” and rocks out an ill guitar lick for “The American Way.” As naturally as the two fit together I wouldn’t mind hearing an entire EP of Statik and Slaine. Q Unique produces a bass banger straight out of James Bond for himself, Slaine and Ill Bill on “Crillionaires.” Speaking of collabos, B-Real and Jaysaun get down with Slaine on DC the Midi Alien’s “Crazy” – a straight up Non Phixion throwback style track. Lu Balz is a frequent producer on this album as well, his style best exemplified by the militaristic backdrop of “Black Horses.” Slaine says on the song “I’m a screwed up human being,” but when you’re self-aware of how screwed up you are, how screwed up can you really be? Listening to “A World With No Skies” is like listening to Slaine exorcise all of his demons, so if his mixtape with DJ Lethal was step one all those years ago, he’s probably up to step nine by now.