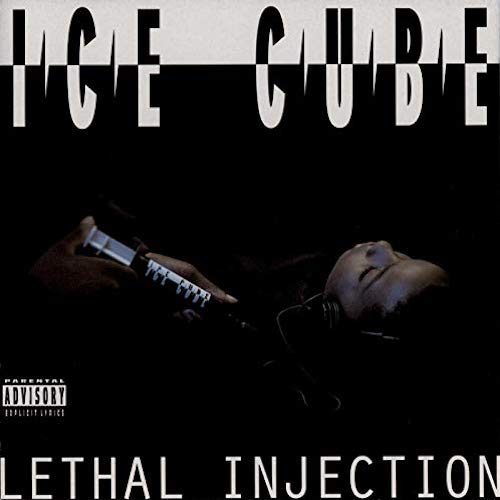 Earlier this year I looked at Ice Cube’s most recent album and was largely impressed that he was able to produce a worthwhile effort despite being better known for his Hollywood acting these days. I also wrote that “we’re never getting back to the ‘Death Certificate‘ era again” as a way of signifying what is considered to be his musical and lyrical peak as a rapper. Ice Cube was the terror of the middle class and the WASP voter. Parents forbade their children from listening to his albums. Politicians decried his music as the death of Christian morality. Stores put warning labels on his albums and you had to present a photo ID proving you were 18 to even buy them. All of this only resulted in making him even more popular with the young listeners that the hand-wringers wanted to keep him away from. I was one of those teenagers and gladly presented my ID to buy “Lethal Injection“.

Coming two years and two albums after “Death Certificate“, Ice Cube’s place as a hip-hop legend was already secure. This was the man who left N.W.A and became even bigger as a soloist. This was the man who predicted the Los Angeles riots on “Black Korea” before they took place. He even showed a surprisingly commercial side on tracks like “It Was a Good Day” and wormed his way into radio play on stations that would normally cross the street to avoid him. “You Know How We Do It” is the logical follow up to that track and although it’s hard for a sequel to equal the original, the samples of “Summer Madness” and “The Show Is Over” make it very hard to resist.

There are some strange things about “Lethal Injection” though that were hard to reconcile then and still are over a quarter century later. The Fu-Schnickens had already dropped “True Fuschnick” in 1992 so the sample that opens “Cave Bitch” feels incredibly out of place. Even now I had to stop and make sure I didn’t press random on my playlist by mistake. Cube had a strong relationship with the Nation of Islam and had previously featured Khalid Abdul Muhammad on tracks, so his intro here was no surprise. I can’t call the racial polemics here more or less inflammatory than anything else from the era, but whether or not the vitriolic sentiments age well is entirely secondary to the fact it’s just not good musically or lyrically.

There are also tracks that seem motivated by a desire to give other people “the rub” off Cube’s superstar rap status. In the case of “Bop Gun (One Nation)” it’s completely unnecessary since by this point most people had come to recognize George Clinton as the father of P-Funk and the source of the samples in many of their favorite tracks. In the case of “Make It Ruff, Make It Smooth” it did nothing for minor Lench Mob affiliate K-Dee, as the song never released as a single and didn’t propel the former Kid Disaster to any greater heights. KAM was and still is a bigger name in rap to this day.

“Bop Gun” at least added to the list of radio friendly Cube songs that could be aired on your FM dial, and the music video was in heavy rotation on MTV back when that actually meant something. Coming on the same album as “You Know How We Do It” though it lent to the feeling that Cube was trying very hard to eschew his “hardcore G” status and had “gone soft” in some way. This criticism dogged Cube for years to come, especially as his acting profile increased thanks to the crossover success of films like “Friday”, and I think it’s largely unfair when you take a closer look at songs like “Really Doe.” Borrowing dialogue from the Edward James Olmos cinematic classic “American Me,” a perfect sample of Slick Rick quipping “and who the f%$k are you” from “Lick the Balls” and the sweet soulful stylings of Rose Royce and the Pointer Sisters on “You Gotta Believe”, Laylaw and Derrick McDowell put down a track as hard as anything in Cube’s extensive discography. O’Shea Jackson perfectly encapsulated the game of survival in the penal system when being questioned by a C.O.: “‘Sir what set you from?’ Play dumb. ‘General pop-u-la-tion.'”

The production work on “Lethal Injection” also deserves more recognition. QDIII’s “Bop Gun” and “You Know How We Do It” are trademark West coast G-Funk tracks, but “Ghetto Bird” is a forgotten masterpiece in its own right. Madness 4 Real may not be remembered today, but “Down For Whatever” was a slow rolling, heavily funkdafied track I absolutely loved cranking to the maximum in the ride. His follow up on “Enemy” is pretty damn good as well, sounding like a throwback to Cube’s Bomb Squad debut as a soloist.

Long time Cube collaborator Sir Jinx also makes an excellent contribution with “Lil Ass Gee”, a song where O’Shea takes a cynical look at his younger peers who are overly eager to join a set. Speaking of cynical, “When I Get to Heaven” would definitely set off those same Christians that were referenced earlier. “The same white man that threw me in the slammer/He bombed the church in Alabama/So if I cock the hammer, God won’t mind/If I have to kill the human swine”. The softly smooth Brian G backdrop belies just how potent the poisoned lyrical barbs Mr. Jackson is throwing on this song.

In summary “Lethal Injection” is an album that seemed like Ice Cube may have been in decline by his own standards at the time, but one for which I have gained a newfound appreciation over the years as being worth of the “Death Certificate” era after all. Things took a much more bizarre turn for Jackson after his place in the same Hollywood he once vowed to burn down was secure, and his musical relevance needed a much bigger bounce back then than it does here. It’s an uneven album with a strange tracklist that veers wildly around if you play it straight from beginning to end, but aside from “Cave Bitch” there aren’t any incredibly poor songs here. Most of Cube’s efforts here are good and a few of them are incredibly underrated.