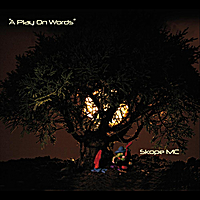 Skope MC :: A Play on Words

The essence of progress is experimentation. When we move into areas that we know nothing about and have nobody to tell us what to do, the best thing to do is put your foot forward and hope for the best. Music evolves in the same way that everything else on this world does, by pure experimentation and the beautiful results that happen from it.

The bad part of experimenting is, sometimes you just don’t get it right.

Skope MC is a different type of rapper. In fact, I’m not sure whether to define him as a “rapper” in the traditional sense. Listening to this record has taken me to uncharted waters as far as my listening catalog was concerned, and while sometimes I’ve been pleasantly surprised by new directions and approaches to hip-hop, sometimes I find myself in an alien place that discomforts me. Maybe that’s the point, maybe Skope MC’s intention is to shock you into feeling uncomfortable in the face of something undefinable. If that is so, than I would say this is a successful record.

But that doesn’t change my opinion on the record. After listening to it on repeat to-and-fro from work, trying to get some type of handle on the sound, I just can’t. Art is only art if there’s a purpose, and even the most experimental of art can find beauty if I can just find out what the fuck it means. The only thing I can find in this record is a pure desire to be different, just for the sake of being different.

Songs like “Street Survey,” “Hip-Hop is Dead?” “Alternative Lifestyle,” and “Tribal End Begins Now” have that apocalyptic feel with off-key melodies and lengthened samples that convey a chaotic sound. Chaos is good if it’s done right, but there’s a fine line between beautifully chaotic and sounding like your cat was chasing mice on your MPC. My main bone isn’t even in the production, it’s the aloof, off-beat delivery that is devoid of presence or charisma. It doesn’t even sound like rapping, it sounds like Skope MC is talking in different speeds.

The last place to look for some redemption is the lyrics. After all, this album is called “A Play on Words,” so I would think most of the focus would be on spitting some groundbreaking verses that I will put on constant replay in my head. Sadly, the lyrics range from mediocre to elementary. “Speed Dating Scene” is…

“… is a song satirizing the modern business of courting a woman
So I just tried the speed dating scene
Scanned the newspaper and the local listings
Next one seemed was tomorrow evening
The job was fleeting and so at night I was leaving
Had a quick shower did washing it appears I was peeking
When I arrived I was a little bit
But luckily it wasn’t a real life date
…
When I took a seat I first met Wendy
When she did speak she was just “ME ME ME!”
As I collect her, only marginally better
So when she did leave I breathed a sigh of relief
Then came the next girl, her name Jennifer
She was very tender
That’s what I remember
Didn’t go no further cause she moved to Burma
So I just sent her…emails and letters”

Simplicity isn’t a bad thing, and I can enjoy a lyrically absent record if the flow and the beat come correct, or the beats and the lyrics are on point, or if just the lyrics and flow go hard. But the simple lyrics, with the horrible flow and the disjointed beats, just leaves me with the feeling that I’m looking at something pointless. Skope MC tries to open our eyes to the ills of the modern world, and break down the dystopian present that we currently live in through his subversive style of music. The thing is though, he doesn’t differentiate himself from any other pretentious modern artist who believes that being different is the sole requirement in being good. If his intention was to shock and awe us into opening our eyes at how shitty everything is, he did manage to shock me. But I am far from awestruck at this album.

I mean, experimentation is a good thing, but sometimes, it’s just best to go back to the drawing board.