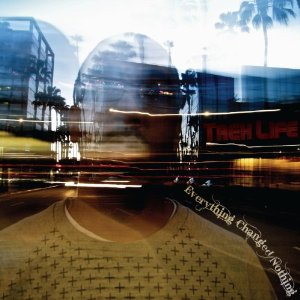 Trek Life :: Everything Changed Nothing

In case you’ve been living under a rock for the last five years, Oddisee has quickly become one of hip hop’s best young producers. Recognizable for his low-key, organic sounding drum patterns, light bass, and sound influenced by D.C.’s go-go music, he defies most other characterization by actively seeking to work with artists from across the globe and musical spectrum to explore a wide range of styles and approaches. This creativity results in an amazing level of versatility, but what’s even more impressive is the sheer volume of music he makes, dropping dozens of instrumentals a month via mixes and compilations in addition to his tracks on other artists’ and his own LPs, somehow maintaining an astounding level of consistent quality and artistry. In assuming production duty on Trek Life’s latest “Everything Changed Nothing,” his challenge is to create a West Coast-sounding album for a rapper who proudly claims California as his own.

Odd and Trek sport a natural chemistryâ€”besides Oddisee’s adaptability, the two have worked together in the past, and last year Oddisee even remixed Trek’s entire 2006 LP “Price I’ve Paid” on a project called “New Money”â€”and musically “Everything Changed Nothing” is predictably inspired. It’s got a tasteful, appealing sound, and while it doesn’t immediately strike me as distinctly West Coast-sounding, the periodic keyboard synth and production element does evoke the California of years pastâ€”for instance, the late highlight “I’d Rather Be” flips the same Bootsy Collins sample that Easy Mo Bee used in 1994 for 2Pac’s classic “Str8 Ballin.” Some of the later tracks are dragged by sparseness but overall Oddisee comes correct as usual.

“…Everybody’s somebody to somebody, so
Carry yourself well, ’cause really you never know
Addicted to good times, but thankful for bad ones
Because I really never knew them ’til I had none…”

While “Ready to Live” is the best example of collaborative potential realized, the first half is heavy with strong group efforts including “Still Never Rains” with J. Bizness, Audio Live, and Skeem Price, a thoughtful take on California life with nods toward the Tony! Toni! Tone! classic. Daysoul returns for “As the World Turns” and the title track, a pair of soulful, horn-tinged numbers featuring visual, reflective performances from Trek Life.

On paper, Trek Life has it allâ€”well penned verses, good technique, and compelling conceptsâ€”but he lacks something in the way of presence. I can imagine him dropping the best verse on a posse cut with household names and it still being the most easily forgotten performance due to his punchy, monotonous delivery. He rarely changes his vocal tone, and given the sheer quality of his rhymes it sounds like something is lost in translationâ€”he’s got plenty of energy, but nothing’s too profound. As shallow as it sounds, what Trek needs is a gimmickâ€”not too many rappers do what Trek does better than him, but they do it in a manner that’s more exciting and memorable. Other weaknesses abound on later tracks; his verses don’t exactly expand linearly, and some tend toward aimless sprawl, while others lack consistent rhyme schemes. Some songs strive to be personal but aren’t quite autobiographical, tending toward reference rather than introspection. “Wow” and the music industry lamentation “What It Is” are plagued by a lack of focus and direction, and at about the halfway point the album begins to lose its insightful tone in favor of more traditional battle raps and braggadocio.

The instrumentals carry “Due West,” which is expertly balanced between a tight horn section and a soaring Rhodes piano, and “So Supreme,” a track recently featured on ESPN’s NBA and NHL Playoffs promotions. Oddisee’s menacing beat features epic-sounding vocals and a thundering drum pattern, but Trek’s rambling verses lack a solid rhyme scheme or structure:

“Popularity’s for little girls
I’m on a flight rockin’ flows all across the world
Exchange foreign currencies, see the sights
Double up and head home to play bones with my nigga Darryl
I ain’t gotta explain my reasons for anything
I simply do my thing, go on beats in my own lab
You fill in the blanks, give thanks for my presence
As I make checks spill in the bank, look
I’m on my grind steadily, niggas you better be smarter
Get your publishin’ up to mess with me, li’l dude
We ain’t one and the same, I ain’t runnin’ for fame
I ain’t runnin’ wit’ ch’all, y’all wanna run in the game
I’m tryin’ to ball up the court, give a fuck what you say
I make solid moves now, bein’ lucky can pay
Only once or twice, I’m gettin’ cash for the rest of my days
Fuck bein’ the best of L.A., so supreme”

The impassioned closer “Might Sound Crazy” is anchored by a rigid piano line and features Oddisee, Audio Live, and Ralph Real. Trek finishes the album with one of his better verses dedicated to his young daughter:

“God’s gangstas, good and bad women
Nigga tryin’ to take these ones and stack millions
In a better environment, chillin’
My mind is on my plan to expand and own buildings
So I kick to make my daughter smile, style
‘Cause that’s all that I need to recede and succeed
I remember being told she would get me when I’m gone
But as soon as I got home she hit daddy with the smile
And it’s all worth the while, I heard that my career is self-servant
Would myself serve a better livin’? Not a word, it
I’m bustin’ with a purpose, to let ’em know
If I can win from rockin’ flows then anything is possible
I never think of rockin’ shows for lots of weed and lots of hoes
Fuck if you believe or not, I’ma precede to rock
So baby girl when I’m gone, you can trust
Everything that I do is for you, plus I do it for us”

“Everything Changed Nothing” is a good listen on all fronts, with unique, inventive production and generally potent rhymes. Trek Life and Oddisee’s collective vision results in an unusually vivid, contemplative worldview, and together they manage to evoke the spirit of California without having to resort to imitating already established sounds. I hate to be so hard on Trek, but despite his clear talent he lacks a defined character at this point. With a little seasoning he and Oddisee might be able to produce something superb that might change something rather than nothing.