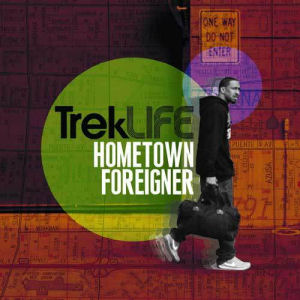 It’s a well-known fact that the rap game misses Little Brother. Not only were they the perfect blend of soulful producer and charismatic emcees, they knew how to craft an album. Thankfully there are artists out there that continue to put together smooth rap music that whilst unoriginal, is always a pleasure to listen to. Trek Life is an artist I’ve yet to enjoy, but after listening to “Hometown Foreigner” will certainly be looking for more from him in the future. Being linked with labelmate Oddisee doesn’t hurt, but production is handled throughout “Hometown Foreigner” by the mostly unheard of Duke Westlake. You only have to see the score below for “Music vibes” to understand how good Duke performs on this record, but you can judge for yourself.

Tracks like “Just the Music” possess the beats that operate on 9th Wonder’s level, and Trek Life performs admirably with a style not too dissimilar to Common on “Like Water For Chocolate”. Speaking of which, “Eat More Chocolate” has Trek Life at his smoothest, sharing a tale of a strained relationship that bluntly tells anyone that wants to cheat to just break up and do the deed as a single person. “What’s Real” is a solid track with Trek and yU doing their best with the worst of topics â€“ being real. I love “real” hip hop, but have heard hundreds of records claiming what is real. If you listen to rap I’m pretty sure we all know what “real” is by now. “Rap Time” fares better, an explosive collaboration with Bishop Lamont involving rapid-fire kicks, snares and scratches. “We Good” has a delicious, swinging production from Duke that feels like an ode to De La Soul. Oddisee, Belvi and Funklogik join Trek to round out a true gem. Much of “Hometown Foreigner” is stuck in thumping soul mode, but there are injections of energy on “Street Casualty”. Duke essentially samples a Pac-Man ghost dying, which although different, is just as addictive as the classic arcade game.

“Be Together” is a mature tale of romance, telling women that all a man REALLY wants is a settled relationship with kids on the horizon. Duke Westlake cooks up a cracking recipe that Dilla himself would have salivated over. Through all the comparisons that have been made in this review, J Dilla sums up the feel of the album most. As dope as Trek Life is, Duke Westlake steals the show, not dropping one wack beat. That’s not to say the record is flawless, as there is little discussed that hasn’t already been covered numerous times. What Trek Life and Duke Westlake have provided is a package so polished that it shines amongst recent independent releases, demonstrating Mello Music Group clearly have an eye for talent. Having heard more expletives than Tarantino’s latest girlfriend, it’s always nice to hear full songs without the need for them, and Trek Life encompasses authentic street hip hop as good as anybody. Delivered in such a crisp manner, “Hometown Foreigner” should not only be welcomed as great hip hop, but embraced as one of 2013’s best.