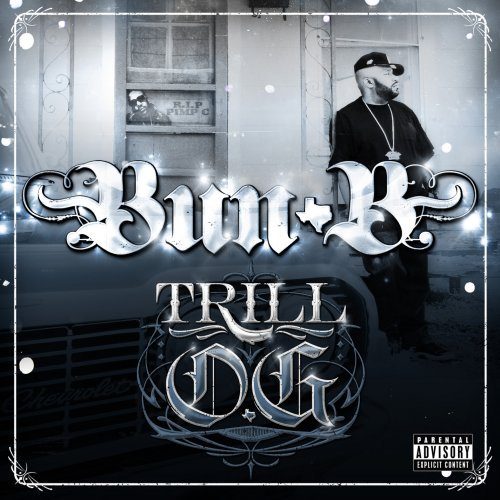 Bun B’s legacy as a hip-hop Hall of Famer had already been cemented when he released his first solo CD “Trill” back in 2005. As one half of U.G.K. the Port Arthur native had a decade+ of hip-hop classics under his belt, but his partner in rhyme Pimp C was doing a long stint behind bars. While some worried at the time that the dopeness of Bun’s solo was the beginning of the end for the group, they promptly reunited once he was released from incarceration and returned at an all-time career high in 2007 with “Underground Kingz.” A few short months later Pimp C was dead. To say this turn of events was perplexing is to say the least an understatement. The Kingz gave their fans what they had been waiting for so long while Pimp C was gone, and just like that he was gone again – only this time for good. The real fucked up twist to all of this was that Bun had already proved he could ride solo and succeed before his friend and confidant left this Earth. Would he even want to do it again?

Hip-Hop got lucky. Bun was able to ride out his pain and come back even stronger on “II Trill,” assuring that both his legacy and U.G.K.’s would continue to ride on through the decade and beyond. It’s 2010 now and Bun B is back for a third go around on “Trill O.G.” sounding as confident as ever. On the Steve Below produced opener “Chuuch!” the crooners on his hook sum up the situation this way: “I came to tell the truth, the whole truth and nothin but the truth/I came to represent for the South in the streets and in the booth.” And represent he does:

“We back baby, and better than we ever was
It’s U.G.K. so quit actin like we never was
You see the crew is II Trill, and in effect
And Rap-A-Lot is rollin with us, we fin’ to wreck
So ask Em, ask Hova, ask Diddy
Go ask Yeezy, Jeezy.. ask Fitty
And they’ll tell you I’m throwed when I spit it
And still in here doin it, you can’t fuck with it
And I’ma hit in the chest with the nina
Reppin H-Town like James Prince Sr.
Am I hard enough? Am I real enough? Am I ready?
Bro well you already know; on your mark, set, ready go!”

Fittingly this is just a warm up – “Trill O.G.” keeps getting hotter from this point forward. J.U.S.T.I.C.E League lays down a smooth pop backdrop for a collabo’ between Bun B and T-Pain on “Trillionaire,” an instrumental eerily reminiscent of Polow Da Don’s “Hero” for Nas.

Bun B: “I’m tryin to take this to the mountain top, Appalachian (‘lachian)
But it’s a rocky road (road) and I’m still movin up
And ain’t no movin us, so keep it pushin, get to movin bro (for real)
You might be new to me but you know I ain’t new to ya
Go ask the white boys, they say he’s totally tubular (dude)
Fuckin bad bitches, rub my dick against their uvula
Everytime I hit the streets, it’s like a fuckin movie bro (damn)
You know what I do to ya, send gladiators through to ya
They gon’ leave ya chopped up, like they was DJ Screwin ya, hold up”

If hip-hop’s most trill artist wants to declare himself a trillionaire, I say go ahead. What some might miss is that he’s not using this mythical status (there are no single individuals alive today worth a trillion dollars) to flaunt excess wealth. Bun would be just as trill as a thousandaire, because for him it’s all about a state of mind where he achieves his goals regardless of his bank account. Guest rappers like Young Jeezy on “Just Like That” spent far more time bragging about what their money buys than Bun, although he will occasionally floss for the sake of a punchline: “Now when it come to makin money I’m a printin press/and when it come to bein trill I’m the litmus test; run it like a fitness test.” Bun has always taken being a badass in rap to a higher level, wanting to impress listeners with the strength of his wordplay first and the size of his bank account second. The DJ Premier produced “Let ‘Em Know” epitomizes this philosophy perfectly, a Texas reunion that needs to be done again and again, one that opens with a shoutout to Guru and a vow this was a “long time comin’ baby”:

“Okay, Bun is on the mic, Premier’s on the track
The South is in the house, now what can fuck wit that?
And what can fuck wit this? I take shots and don’t fuckin miss
First on your baby mama bucket list
You on some sucka shit, might as well suck a dick
‘Cause you bein a bitch just for the fuck of it
And when I fuckin spit, niggaz get to tuckin shit
Tryna duck down wherever they can fuckin get
They better ask somebody
‘fore I have Big Truck pass the shotty and blast somebody, bitch!
Mastered the flow, the gun and the hand game
Now I’m resurrectin a REAL nigga campaign!
Fake ass niggaz, we snatch ’em out the damn rain
Take they damn chain, hit ’em with the damn thang
BANG! Now that’s what happen when the trigger blow
Aiyyo Premier, let a motherfuckin nigga know!”

If you don’t love this song, just retire from hip-hop right now and go fuck with some Pat Boone records. Seriously. There’s much more to love on this densely packed 20 track album, although I’m given to understand some versions come with less – around 16 in fact. So let’s rule out the bonus tracks or iTunes deluxe edition tracks and say this – you may not fuck with a better album the entire month of August. I’m sure there will be some good releases at some point, but it’s awfully hard to name a bad track on “Trill O.G.” anywhere. The collaboration of Bun, Pimp C, Trey Songz and TUPAC SHAKUR on “Right Now” is EPIC. I normally can’t stand Gucci Mane on tracks, but Bun B even makes him tolerable on the pounding B-Do beats of “Countin’ Money All Day.” There are much better guests though – Drake flosses on the almost six minute long Boi-1da song “It’s Been a Pleasure,” Twista takes things to a triple time flow from Chicago on “Speakeasy,” and Slim Thug lives up to the title of “Ridin’ Slow” when he gets down with Bun and Play-N-Skillz, a track that vows to “shake the sidewalk” and should succeed in that aim and claim. I make no apology for being a long time Bun B fan, but if this is your first time getting down with the man then “Trill O.G.” will undoubtedly make you a convert too. R.I.P. Chad Butler.