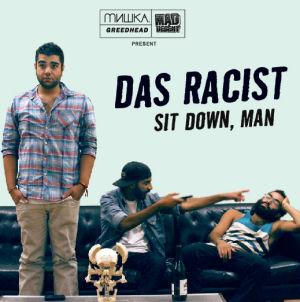 Das Racist is a very polarizing group, and that’s without even taking their name into account. Though the spelling might be considered a tribute to Das EFX, it’s more of a play on the background of rappers Himanshu Suri and Victor Vasquez, who are probably hip-hop’s first ever Indian-American meets Cuban/African-American duo. If they aren’t, well they’re certainly the first to ever get recognized in the mainstream, as evidenced by the success of their single “Combination Pizza Hut and Taco Bell.” No, I’m not joking, but you can never be quite sure whether these two emcees really are or not. Their last album “Shut Up, Dude” had listeners scratching their heads trying to figure out if Suri and Vasquez were serious about rap music or whether it was all a big goof by two Wesleyan students who grew up in Brooklyn and felt familiar enough with hip-hop to be able to mock it.

“Sit Down, Man” is not likely to clear up the issue any time soon. The good news, besides the fact that Das Racist is offering this 20 track album as a free download, is that it’s very well produced and easy to listen to. The Kassa Overall laced “Town Business” has a swinging groove reminiscent of mid-1990’s Hieroglyphics fam tracks. Dame Grease bangs out “Rooftop” so hard that when the emcees brag they’re “bringing ’88 back” you can buy it. While the sample for the Devo Springsteen produced “People Are Strange” might be obvious just from the title, that doesn’t make it any less fresh, and both emcees change their flow to go along with the loping tempo. In fact the Das Racist rappers are very chameleonic in their hip-hop approach – sounding like Fabolous on “Return to Innocence,” mc chris or Beefy T on “You Can Sell Anything” and Pusha T on the Sabzi produced “All Tan Everything”:

To live up to their name, Himanshu Suri and Victor Vasquez often seem to be mocking racial stereotypes about themselves or other groups. As such it’s easy to imagine people missing the point of “Puerto Rican Cousins” and getting mad. Then again, I’m not sure I got it myself. Are they making fun of the fact that some people can’t tell the difference between Indian and Spanish skintones, or are they celebrating the fact they look close enough alike to be blood related? “They call us joke rap/we kind of weed rap/we just like rap/we don’t even need rap” brag the comedy duo on “Rapping 2 U,” and though they profess a decided disinterest it’s hard to ignore how fresh their bars sound over the Samurai Champloo

vocals and beats of “Shiki No Uta.”

Das Racist are constantly surprising – they may be the only rappers I’ve heard other than Craig Mack flowing to the open of “Days of Our Lives” on “Hahahaha jk? (Just Joking, We’re Not Joking).” The real problem for some listeners may be that even if they really are mocking hip-hop and it’s all just a joke, they do it well enough you can’t help but bounce to it, like Weird Al parodying Chamillionaire on “White and Nerdy.” Instead of getting mad, get in on the joke too.