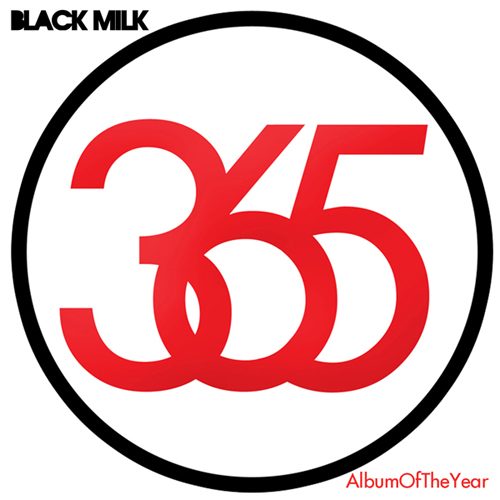 Black Milk :: Album of the Year

My sincere apologies for making you wait a bit extra for this review. You see, it’s been one of the days. It started off great: had a great sleep, the sun was shining, I looked and felt good, not to mention very productive. Then I got a random phone call telling me that I’m not going to have a landline phone or internet for a month â€“ I had to spend three hours battling an automated telephone system and repeating myself to 11 separate call centre workers. My mood improved, when I managed to simultaneously speak to my best friend in Nigeria. But straight after that, I got another phone call; this time informing me that one of my close relatives got diagnosed with cancer today. You see? It’s just been one of those days.

In truth, it’s been one of those years: two steps forward, three steps back. Half the people I know are either super happy, or on the verge of a nervous breakdown. They are either flying in their respective careers, or have been made redundant, forced to watch crappy daytime TV by the effects of the recession. They are either deliriously lucky in love, or getting their Achilles heel hacked to pieces by the “wrong” guy/girl. There seems to have been little middle ground in my own life â€“ such extremes have defined the past year in ways you wouldn’t believe, and it has become abundantly clear that the most interesting story you can ever tell is your own.

And that is what Black Milk has decided to do with “Album of the Year” â€“ not a boastful, ill-advised title, but simply THE album of HIS year, describing his past 365 days. That it also happens to be the album of his career is a bonus, but AOTY is halfway between throwback and unique. The first couple of listens are bemusing, polarising and, to an extent, disappointing. However, persevere, dear Reader, and you will be rewarded with an LP that, through looking inward, almost faultlessly details the outside world that so many of us face right now. It is an album that feels like it could not have been released at any other point in the timeline of this illustrious genre.

“Album of the Year” doesn’t always work flawlessly, and one could strongly argue that it trades in thrilling one-offs in favour of consistency. For example, there isn’t a single effort that matches the stunning sonic genius of a track like “Bounce” from his last LP, “Tronic.” However, this time round, we are gifted a much more even listen, with virtually no peaks and troughs. For what it’s worth, I felt that Black Milk’s last two albums were rather overrated â€“ the opening third of each was impressive, yet his way with words, not to mention his flow, never grabbed me as particularly captivating. More importantly, the music wasn’t stunning all the way throughout â€“ challenging, sure, but something was missing.

Those problems have evaporated on AOTY. Milk has improved immeasurably as a rapper. His flow is still weird and indescribable, but it is entirely on point now, and his lyrics are (for me, at least) a hundred times better. Viewing the tracklisting, seeing that on “Deadly Medley” his guests are Royce Da 5’9″ and Elzhi, you really fear for the guy â€“ but he holds his own to such an extent that nobody walks away with the track. The lyrical complexity has been elevated, and whilst his metaphors aren’t mind-blowing, he has punchlines galore and, crucially, has developed an impressive knack that Elzhi himself somewhat lacked on his otherwise impressive “The Preface.” That would be emotional resonance, brute honesty, managing to really connect with your audience. Whilst Elzhi is an obvious fan of hip hop, and an incredible MC, Black Milk is developing into a compelling artist, and this is his tipping point. The penny has finally dropped for him.

The reason Black Milk comes across as strange much of the time â€“ and why it can take such a while to get used to him â€“ is due to his voice, the kind of voice that ALWAYS sounds like he is bragging. It does take time to get over this, and on cursory listens, you’d think it’s more of the same. But on the opener “365” he introduces some of the themes: not being in his “right mind,” losing his friend and aunt, the various highs and lows of his career. He balances out the album almost perfectly, thematically, with the aforementioned braggadocio posse cut “Deadly Medley;” industry bullshit on “Welcome (Gotta Go);” various encounters with the opposite sex on “Oh Girl” (with a cracking line: “You’re telling me I gotta get in your head just to get in your denim? Damn!”). Then you have the drunken emotional outpour on “Distortion” (or maybe it should be “Dis Torture”) complete with a stunning beat and thrilling lyrics; the Rocafella-esque “Over Again” with total honesty about the state of his career; the musical love-in with the drummer on the leering funk of “Round of Applause;” pure bars on “Warning (Keep Bouncing);” and the brilliant ending of the confessional, “Closed Chapter.”

Musically, it sounds far removed from more of what Black Milk has given us before. For the most part, it sounds like he had an idea, took the essence and ditched the rest in handing it over to a live band. There are exceptions, such as “Warning (Keep Bouncing)” and “Over Again” but it is almost as though he has simultaneously regained control over the project, whilst relinquishing much of it (wisely) in order to improve as a rapper. Are there any beats that jump out, that internet rappers can’t wait to jack and freestyle over? Probably not: they are different, deferential, but not inferior. But it results in a consistency that can’t be faked, and from start to finish it isn’t the classic instrumental orgy we might have hoped for, but instead we get a real ALBUM.

For once, I’ve no idea precisely how well this album is going to age, whether or not it will be deemed a “classic” or what it will genuinely do for Black Milk and his career. It doesn’t really feel like it matters. This is such a personal listen that it probably won’t connect with everyone, but for those that have had a really shitty year, you can’t help but find affinity with the words of this rapper. I use that word carefully, because â€“ let’s face it â€“ for the vast majority of us, Milk was a producer that could rap, but much better at the former than the latter. On “Album of the Year” he has destroyed that belief, and he is finally an artist really worth listening closely to. Through soaking in various travails, and pouring them through the microphone, he has truly grabbed us. His beats have almost taken a backseat on this journey but it is worth it just to prove that his story, his journey and his life are much more interesting than a mere drum pattern and a sample.