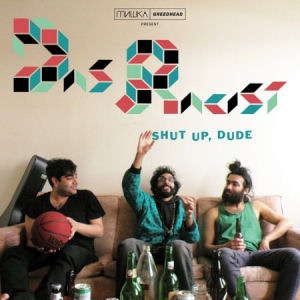 Das Racist scored a surprise hit last summer with their hit “Combination Pizza Hut and Taco Bell.” The entire lyrics of the song were basically “I’m at the Pizza Hut/I’m at the Taco Bell/I’m at the combination Pizza Hut and Taco Bell.” It was so dumb it was smart, sort of like Jackass or Forrest Gump. The duo is made up of Indian-American Himanshu Suri, and Cuban/African-American Victor Vasquez. They live in Brooklyn, and met at Wesleyan, one of the ten most expensive universities in the country, and the alma mater of indie psych stars MGMT.

They may act stupid, but they aren’t stupid, and they have the student loans to prove it. Their influences include the Wu-Tang Clan, MF DOOM, dadaism, and the Immigration and Nationality Act of 1965. In interviews, Himanshu name-drops literary critic/Columbia professor Gayatri Chakravorty Spivak and claims that their music is protest music along the lines of 19th century African-American poet Paul Laurence Dunbar. Those are pretty big words from a purveyor of jokey, stoner hip hop that is just this side of Weird Al territory.

There are three reasons why Das Racist is more than just a joke: they have a much-needed perspective, being from two ethnic groups that are generally underrepresented in the cultural debate, they aren’t preachy, and they have good beats. If Himanshu and Vasquez decided to merely regurgitate their college syllabi in hip hop verses, it would get old quick. Instead, they use humor to make their criticisms of racism and consumerism in America. Musically, they tap into Baltimore-style dance-oriented hip hop, minimalist electronica, and dabble a little in reggae. The beats are consistently good, from the stoney Middle Eastern vibes of “Ek Shaneesh” to the e’d up club music of “Chicken and Meat.”

While I like “Shut Up, Dude,” I sometimes found Das Racist’s brand of snarky, sarcastic intellectualism dishonest and irritating. This is an attitude that is endemic to hipsters: too often they choose to trade only in sarcasm and irony, mocking other people without ever taking a stand themselves. (The worst example of this was Le Tigre, who made shitty dance music under the guise of subverting the dominant heterosexist paradigm.) The broad agenda that Das Racist lays out in interviews doesn’t always match the goofy rhymes in their music. Their closest contemporaries are probably Lonely Island, composers of “Dick In A Box” and “I’m On A Boat.”

Also, their non-sequitur flow has been done before and better by artists like Ghostface and MF DOOM. They boys even tackle Ghostface’s “Nutmeg” and rap over DOOM’s “America’s Most Blunted,” here called “Deep Ass Shit (You’ll Get When You’re High).” They don’t come close to Ghostface’s crazed storytelling or DOOM’s blunted, biting humor, and both tracks merely highlight their shortcomings as MCs.

Das Racist have the potential to be something great, offering nuanced and cutting insights into racism in America, the Latino and Indian-American experience, and the state of hip hop. On tracks like “Shorty Said” they manage to be funny and insightful, commenting on how they get lumped in with anyone who is remotely brown, and offering up lines like “Shorty says I look like a gay David Banner on acid.” They mix up pop culture references in a consistently funny series of one-liners, connecting sounds and words in a seemingly random way that can be both deep and hilarious.

When they hit it right, Das Racist come off like Lil Wayne with an M.A. in Ethnic Studies, pumping up Wayne’s trademark stream-of-consciousness flow with bigger ideas beyond getting laid, getting high, and getting money. When they flop, they sound like a couple of over-educated stoners fucking around on a Friday night. Either way, “Shut Up, Dude” is worth your time.