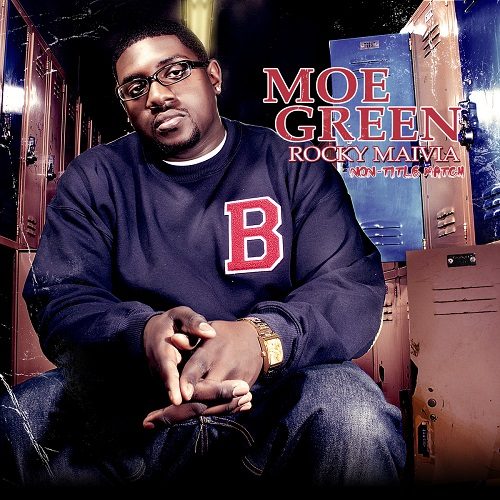 Everybody will attest Moe Green to be a contemporary rap artist. His style and sound are that of credible mixtape grinders like Wale, Curren$y, etc. Yet although he gives it away for free, Moe is intent on calling “Rocky Maivia” an album, not a mixtape. This album then meets one major requirement – it’s listenable. 17 tracks of new school production make for an unsually memorable free-download experience.

Opener “Going for the Kill” makes good use of La Roux’ “In for the Kill,” the sampled vocals emerging slowly in a track stripped down to a dark, hovering bassline and a lone, airy keyboard. More traditional territory is covered with the jazzy, strumming “Non-Title Match.” The Nick Maples-produced “Emerald City” lives up to its name with delicate, melodic instrumentation inhabiting a roomy track. Rumbling drums rattle in the background of DJ Ammbush’s “Daydreamer” as chanteuse Ragen Fykes lends her jazzy flair to the breezy West Coast track. Moe and producer MT The Great enter a meditative dialogue on “Ride,” an intriguing track that blossoms when the first hook sets in, when bass and “Be Thankful for What You Got”-inspired crooning join together, before the hand-picked orchestration gets time to shine towards the end when the vocals fade. Sparse rock drums drive “Search Party” signed by Rick V, another track that distinctly points towards new soundscapes for rap music emerging on the horizon. “Keep it Ill” by Su! comfortably walks down the electronic path an increasing number of rappers explore. In contrast, HG’s “KIM” coasts on an acoustic vibe with guitar strumming complemented by soft drums and “Nautilus”-like keys.

As of this June, Moe Green officially represents the next generation of Bay rappers as the Vallejo resident has been chosen by KMEL as one of 2010’s Bay Area Freshmen. “Rocky Maivia” may just be the release for the occasion, the album title borrowing Dwayne ‘The Rock’ Johnson’s first ring name when he gave his wrestling debut in 1996, and now being used by Green as “a metaphor for the newcomer with great potential entering the professional leagues.” As he puts it in “What it Is”: “This Rocky Maivia, before the large crowds / catchphrases, Elbows and Eyebrows.” While the suffix “Non-Title Match” for this ‘Unofficial Debut Album’ takes some pressure off him, the goal is still clear – to become a major player. The thought of making progress therefore occupies the 22-year old’s mind. And even though he calls himself The Dreamer, he stresses that his “dreams are in HD” and repeatedly discusses their realization.

He frames his insight with convincing imagery (“I’m stayin’, put change in the meter”). And the “front row nigga […] sittin’ in the nosebleeds” at least rhetorically has the will to work and the patience to wait for his breakthrough. Check the following lines from “Emerald City”:

“I had to work overtime
Keep it ill, no modified storyline
Skipped lunch so I could buy recording time
Married to the game, so I adore the grind”

Moe Green is an intuitive vocalist that, while emotional, doesn’t resort to the drama queen antics of some of today’s rap stars. His delivery and diction are straightforward, but by the same token, he is still only just rapping. The self-motivational lyrics may play a part in this, but often Moe sounds like he’s talking to himself, not an audience, despite grandiose affirmations like “Fans so thirsty / well, come walk with me and I make it all worth it” and “This is just a prefix / the album that I’m gonna give y’all leave you speechless.” To get there, Moe Green has to find content. So far he dabbles a bit in relationship matters (“Search Party,” “Level After Like”), but not much more. At this point, this Dwayne Johnson has yet to turn into The Rock.