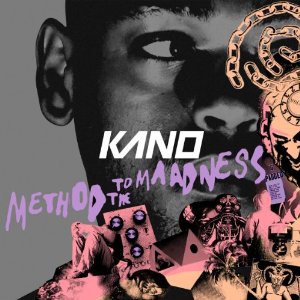 Kano :: Method to the Maadness

Kano’s new album “Method to the Maadness” (that is the correct spelling FYI) has failed. Yep. Didn’t even break the Top 40 in the first week. I take absolutely no pleasure in reporting that â€“ however, it is no surprise to me. Kano is a talented lyricist, has impeccable breath control and delivery, a smooth, almost effortless voice, and has been dubbed everything from the UK’s answer to Jay-Z, Nas and (by himself, albeit it cheekily) Big Daddy Kano. He did the circuits, had an all-star cast of producers, took over influential radio shows and created a big marketing push. Yet, his commercial failure was entirely down to three key aspects.

Firstly, there are no true hit singles on the LP. You cannot, unless you are a global megastar, sell records and crack the charts unless you have hit singles that connect with the radio, TV or underground. Doesn’t happen. Secondly, MTTM is eclectic, sounding oh so original, but it is blatantly derivative. He has clearly been listening to artists like M.I.A. and Lil Wayne, as their DNA is all over the LP. At times, sure, it comes across as either paying homage to certain elements of the music industry or, interestingly, lampooning other parts. Yet, it is strangely unsettling to here Kano being such a, what’s the word? Follower. He is as far removed from terms like “original” or “trend-setter” as possible.

Before this veers off into an ultra-negative review â€“ I will save the third point until last â€“ you should know that, bizarrely enough, little of this matters. This is a GOOD ALBUM. It has some challenging production that bangs pretty hard; some awe-inspiring lyrics and punchlines (sorry, Kano, “kicklines”); not to mention intelligent concept songs and a real balance of material. The sequencing isn’t perfect, but MTTM is short, sharp and to the point, but with a diverse enough tapestry to warrant further listens, again and again. In fact â€“ and this is rare for me â€“ I was able to switch on the little used “Repeat Album” button on my iPod. He has put an awful lot of work into it, and it has paid off handsomely â€“ if not commercially, at least from an enjoyment perspective. It will probably be HIS favourite album thus far, his own pet project that he will always retain affection for.

Producers include Diplo, Damon Albarn, Hot Chip, Boyz Noise, Fraser T. Smith, Chase & Status and Kano himself. The style veers all over the place, bringing in dancehall, funky, rock, 808’sâ€¦ In fact, pretty much everything except for straight up hip hop. It works well, too. Kano knows how to mesh with a track, but still impress lyrically â€“ he has always had a way with words, and he has improved in certain elements over the past 5 years. They are the kind of beats that require repeat listens, however, as surface skims don’t make much of an impression.

Lyrically, Kano is on good form. On tracks such as “Dark Days” and “Slaves,” he pretty much bodies it, combining smart flows with real substance. Occasionally, it doesn’t work so well â€“ the Hot Chip songs, for some reason, miss something inextricable (particularly “Lady Killer”). “MAAD” is successfully tongue-in-cheek, showing solidarity with those annoying fucks blaring out shit on public transport and intimidating passengers (I take it Kano hasn’t actually TAKEN a bus for about 6 years now, so should be in no position to comment). And whilst you can see the DNA of those aforementioned artists in certain songs, his mission appears to have been contrary â€“ do the polar opposite to whatever is going on now. That means no guest hooks from Taio Cruz, no collabos with N-Dubz or Professor Green, no real “baby girl, you rock my world” songs, and music that has little discernible connection to anything on the radio right now. That is admirable, because it is precisely NOT what was expected, and Kano has certainly made an album that will end up as a fans favourite.

So what was the third problem, then? It is twofold. Sure, Kano is only 25, but this is his FOURTH album now. His first was a classic, his second a disaster. Then he got dropped, released a hard third LP which was more like a mixtape. The point is, by this stage through his music, you would expect to know Kano, have a really good idea of who he is, what he represents, what kind of guy he his, publicly, privately, whatever… You don’t. Not at all. I’ve listened to Kano for SIX years now, and know as much about him now as I did in 2004. That means that his coolness and distance has started to affect his relationship with his audience. Should he go on some stupid reality TV show or play the whole tabloid/paparazzi fame game? No, of course not. But he needs to give more of himself on his records.

Also â€“ and this will sound strange â€“ he is almost TOO good a song-writer at times. He is so tightly focussed on the structure and cleverness of the song format that it becomes difficult to connect with certain elements. Maybe it’s because he has been recording and touring since such a young age that he might have just missed out on living his life, gaining experience and having genuinely interesting things happen to him. Or maybe he is just an intensely private individual. But when he name-checked “Dead Presidents II” it got me thinking about what that track has that Kano still hasn’t quite graspedâ€¦ Jay-Z’s song has a looped chorus, a great beat and an open road that he just flows on majestically.

Kano has every element except dramatizing personal information â€“ a line as simple as “I had near brushes, not to mention/Three shots close range never touched me, divine interventionâ€¦” is what makes the difference. It’s not the bullets that draw us in, but the story, the thrillâ€¦ Kano’s life compared to my own comes across as either dull, boring or non-existent. I’m sure that isn’t the case, but until he opens up, how would we know any different?