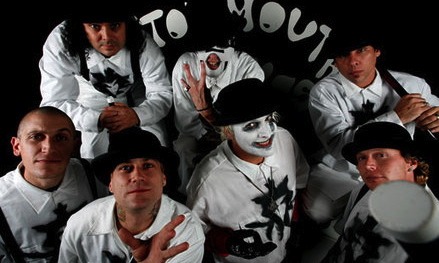 When the Kottonmouth Kings formed in 1994 they could have never predicted that in 2010 they’d be 17 albums deep and still packing houses, as well as bowls, nationwide. Being that during most of their time, including the present, the group has been an independent act, theirs is truly one of the great hip-hop success stories of all-time. This week, with the group hitting the road for their Party Monsters Tour, which runs until the end of November, RapReviews caught up with the Kottonmouth Kings’ Daddy X (pictured center) to find out how they made it all happen.

Adam Bernard: You’re hitting the road right now. Tell me about the tour you’re embarking on and the kind of show fans can expect.

Daddy X: We put together a state of the art light and stage show to take the experience to another dimension! It’s the Party Monsters Tour, so the fans can expect a hell of a party! We have been doing two hour sets every night.

AB: With the exception of “Suburban Life

” you guys have had zero mainstream radio, or video, airplay, but you’ve still managed to build a very long and successful career. Did you go in knowing your music might not fit into the mainstream, and if so, did you have a plan for how to survive without radio or video airplay?

DX: From day one our goal was to build a career and be in control of our own destiny. I started Subnoize Records so we could put out music when and how we wanted. I never knew where this journey would take us, I just knew we had to set a course of independence. We are only in control of things that we can control and that is making good records and putting on good shows, the rest is up to fate and destiny.

AB: How much do you feel not being in the mainstream has helped your longevity?

DX: I think the Kottonmouth Kings fan base realizes that after all these years they are responsible for us still doing this for a living. Our fans feel a pride of ownership in the Kottonmouth Kings and Subnoize. Without them none of this is possible. We have a lot of new fans just discovering us, and we have older fans that have taken the ride with us. The lives we touch through our music is the most rewarding part of the process.

AB: Speaking of your fans, how would you describe your relationship with them?

DX: We are so lucky to have such great fans who really get behind us and relate to what we are putting down. We are all humans beings experiencing this very intense time on our planet, if the Kottonmouth Kings can help someone forget about their troubles for a while, and give them pleasure, then that’s a good thing. We try to relate to our fans as our brothers and sisters, equals.

DX: We met some of Tech’s camp when we were touring through KC. They turned us on to his music. We met and really got to know him on the Wicked Wonka Tour with ICP, Bone Thugs-N-Harmony, us, and Tech N9ne, and we just hit it off. We became friends and allies. They (Tech’s camp) are great people and we have shared thousands of miles and many stages touring together. It has been one of the many blessings of our journey.

AB: You rhyme, we’ll say occasionally, about weed, and your audience certainly appreciates that. Why do you think weed is such a uniting force?

AB: You started Suburban Noize Records as a way to get your music out. You now have a full roster of artists, and even the imprints Break Silence Recordings and Skunk Records, under Suburban Noize. When you think about the development of Suburban Noize, what surprises you most?

DX: As the industry started to shift so radically because of the internet it left a void for a lot of great artists. It also empowered a lot of artists to take control of their careers. At Subnoize we have grown in so many ways. We have a dedicated staff, and Kevin Zinger, my partner, is relentless. We have had growing pains trying to adjust to taking on so many projects, and it can leave our staff feeling overwhelmed, but we are trying to become more efficient so we can grow and adapt with the changing times and technology. It is a work in progress, a true labor of love.

AB: Incidentally, congrats on Eyes Set To Kill. I saw, and spoke with them, at Warped Tour this year and they’re amazing. I’m really looking forward to the Lexia solo record. Not all of your artists have been so well received, though. Of course, I’m speaking of Brokencyde. Did you know they were going to get so much negative press, and when the negative press started coming in, did you panic? How did you deal with it?

DX: I came from the punk rock world, so any artist that can get that type of reaction from people must be doing something right! It’s like the Sex Pistols, or Corporate Avenger, or NWA; groups that get a reaction out of people excite me. On the business side they were, and are, one of our biggest selling groups! I will take ten Brokencydes any day of the week so I can go retire on some island and smoke weed and surf all day!

AB: Finally, speaking of smoking weed all day, do you think America is getting any closer to decriminalizing weed, or is it, if you’ll pardon the pun, just a pipe dream?

DX: We have made such great progress in the last five years. Prohibition in America will end. Common sense policies on marijuana are inevitable. It is the will of the people! We the people! We love to get high! Enjoy life.