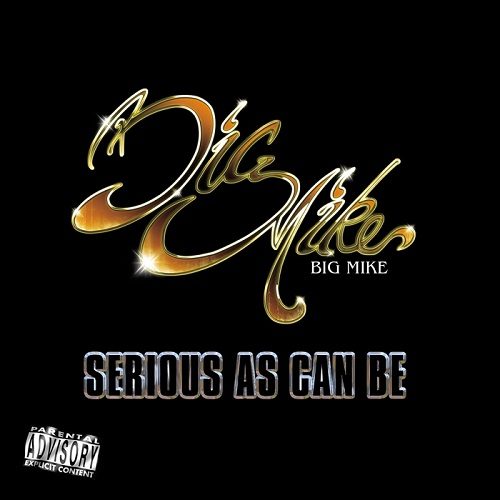 For a minute, there was a punchline waiting to happen involving Big Mike taking the feud with a former label one step too far and ending up doing time (check his rueful verse on Pimp C’s “Havin’ Thangs ’06”). Many a frustrated rapper could surely relate. But for whatever reason the incident never entered rap’s collective consciousness. Nor did the fact that Mike Barnett bounced back – 2009’s “Serious As Can Be” was Big Mike’s third album after parting ways with Rap-A-Lot Records, following “Nawlins Phats” and “Keep it Playa.”

The title “Serious As Can Be” evidently harkens back to his first two solos “Somethin’ Serious” and “Still Serious” and thus promises a return to form. Lyrically and vocally, fans know they need not worry about the native of New Orleans neighborhood Gert Town as his down-home O.G. reflections embedded in a tightly-woven tapestry of rhymes have been consistent across albums. The question is rather how he fares without the producers he worked so successfully with. The CD comes without credits, but there are some indications that the musical contributions are limited to a selected few. He shouts out Groove Tunes Inc. at the beginning of the album, a Houston-based entity who laces “You Niggas Ain’t Holdin'” with a synthesized blues/funk concoction absolutely worthy of Big Mike’s veteran parlance:

“I’m straight up out that gutter, for y’all who ain’t heard about me
I’m Big Mike, that G who grew up with all them hustlers ’round me
Drug dealin’ and sinnin’, layin’ with the finest women
Whippin’ Cadillacs way back when before them rims start spinnin’
Meanin’ I’m vintage, still ’bout it after seven years sentenced
Still hungry like in the beginnin’, homie, I’m so relentless
Hot and burnin’ like fire, sittin’ on 30-inch tires
Haters foreseen my comin’, forfeited the crown and retired”

Like quite a few southern rappers (at least those with a modicum of longevity), Big Mike puts emphasis on coming across as an adult, realistic man with a hardened yet also heart-warming outlook on things. MC’s like MJG, Scarface, Big Boi, Bun B, Chamillionaire, Killer Mike, etc. take pride in who they are and what they do, and that attitude often gives their music an air of nobility. Big Mike may just top all of them in terms of having the stature of an old school bluesman. As such, he can often be found trying to fight his survival instincts, as can be witnessed on “Animal.” The original version that appeared in early ’09 being produced by Chops and featuring Rick Ross, “Animal” here is all Mike’s as he rides the thick gumbo of dense drums and organ grooves:

“I been a animal since birth, growled when I crawled
Louisiana black bear, see the retractable claws
[…]
Grown man business, hustle physical fitness
Holdin mo’ medals than a gymnast in these ghetto olympics
[…]
Lames burn like oil fields up in the Middle East
We pray for warfare, fuck peace if we can’t eat
But still God-fearin’, the truth is what you’re hearin’
Champion all causes for my underprivileged children
[…]
Crossed the finish line and waited to see if my homies made it
Congratulated all of those who had persevered
All of those who shed blood, dropped sweat and a gang of tears
Yeah, this here is ghetto evangelism
I’m tryina show you the light, endin’ your self-vandalism”

The album continues along these lines, Mike submitting himself to a higher power while assuming dominance over competition, his message alternating between inspiration and intimidation. The album has its share of more aggressive cuts (“The Game,” “Fuck With Me”) but fares best when Mike achieves a synthesis of all the sides of his personality plus grounds his songs in swampy soul, such as on the definite “Somethin’ Serious” throwback “Stone Cold” (featuring Houston vocalist Slash) or the menacing, ‘Jaws’-inspired “The N.O.”

Since it takes a real man to admit weakness, expect Mike to lower his guard every now and then. While he touches on his wrongdoing and the consequences on “Ride On” (featuring an Akon hook that already appeared in a C-Murder track), “Beautiful Death” (incorrectly listed as “Beautiful Earth”) is clearly the deepest cut here, as Mike explains himself to his offspring:

“Your survival plays a big part in my existence
Jesus, if you’re listenin’, incline your ear to my repentance
Forgive me for all that wrong I done
My every motive was family, not just to get me some
not just to have some fun
Choices were limited
Single mom government dependent with nine kids
so I struggled for years
[…]
Never wantin’ to ball
never wantin’ it all
only wantin’ for y’all
the best of what was out there, riskin’ takin’ a fall
[…]
Usin’ Jesus’ example, he died so that we may live
Kind of man would I be if I ain’t sacrificed for my kids?
Four years in that ‘tentiary, sick cause I let you down
Felt like it took a century for me to come back ’round
Still tryina get on my feet three years since my release
still feelin’ repercussions of bein’ took off them streets
I know it’s been a minute since that consistent money
Daddy need time to get it, nobody’s gettin’ it for me
Some do it for fame, others do it for money
I do it for life and the fact that you love me”

Without a single guest rapper and zero contributions from the south’s most in-demand production powerhouses, Big Mike puts a lot of trust in himself. More contemporary beats (“Smile For the Camera,” “All My G’s”) and the ’90s West Coast reference “On My Grind” provide variety, but it’s the more musical, traditional instrumentation that best suits him, from the festive “It’s All Good” to an improved version of “Keep it Playa”‘s “Da Sermon” and “Ride With Me” (also found on “Keep it Playa” as “Leaving Louisiana”). For over 15 years now Big Mike sticks to his musical vision. Still as a whole, “Serious As Can Be,” while better than “Keep it Playa,” is not quite on the level of his three ’90s albums, lacking the guiding hand of Mike Dean and company. Nevertheless, what we have here is yet another example of how rap in its entirety has so much more to offer than what the masses are aware of in 2010.