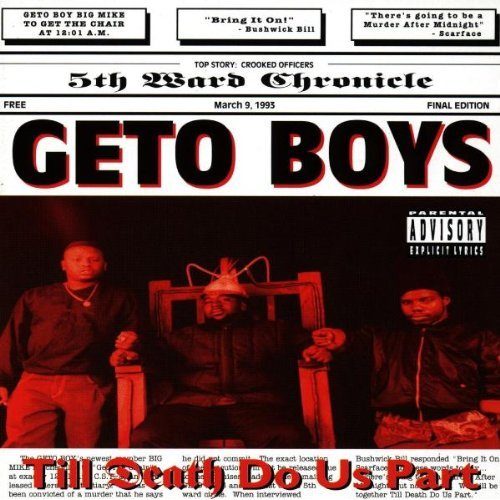 Geto Boys :: Till Death Do Us Part

Despite well received solo albums and two members taking their leave, the Geto Boys kept going after the platinum success of “We Can’t Be Stopped.” Behind the scenes DJ Domination (today known as Domo) took longtime member DJ Ready Red’s spot, and up front Willie D was replaced by New Orleans transplant Big Mike, who was already familiar with the proceedings at Rap-A-Lot Records as one half of the Convicts.

Under the watchful eye of James Smith, the trio revisited some GB staples and introduced a few new nuances to the repertoire. With the Ghetto/Geto Boys being the label owner’s vision from day one, it didn’t come as a surprise to hear him open and close the new album. The “Intro” finds him talking in his careful, Corleone-like manner, mentioning “a lot of people mad about our success.” If you think you’ve heard this one before and expect a tirade against haters, you must be a newcomer to the Rap-A-Lot saga. Referring to “the DEA, IRS, and other wicked people in high places,” Smith for the first time alludes to a conspiracy to bring the label down on trumped up charges, which he counters as follows: “I didn’t allow myself to be systemized by the welfare system and poverty that they try to handicap us with in the ghetto. I work my ass off, I pull brothers off the street. And together we built a multi-million dollar record company in a few years. I did it the way it was supposed to be done, by hiring lawyers and accountants, to make sure everything was done legally. But there is still one problem – I’m black. So those people whom I referred to earlier (…) they say: Those guys at Rap-A-Lot must be doing something wrong, because it’s no way a group of niggas from the ghetto can run a multi-million dollar business.”

Rap-A-Lot, especially when spearheaded by the Geto Boys, always saw itself as a force in fighting the power. As Frank Williams put it in his Source review of “The Resurrection”: ‘More overtly than any recent rap group, the Geto Boys in 1996 make it clear that the ’80s Black consciousness of BDP and Chuck D now lives in the undercurrents of gangsta rap.’ In 1993, Lil’ J was the one to put it into context while his rappers were still in the process of discovering said consciousness.

The album’s most political song targeted the usual suspects. The concept for “Crooked Officer” had originally been developed by Big Mike when he was at Death Row and might have even ended up on “The Chronic” in some form. Revised, it became the lead single for “Till Death Do Us Part.” Mike helms the memorable “Mr. Officer, crooked officer / I wanna put yo ass in a coffin, sir” chorus, as each member vents his frustration with law enforcement, bringing forth familiar accusations and making very explicit threats. What was surprising about “Crooked Officer” was that it didn’t happen earlier in the Geto Boys discography and that it didn’t stir “Cop Killer”-level controversy, although that can partly be explained by the smallness of the label and the fact that for the single version the chorus had been changed to “Mr. Officer, crooked officer / Why you wanna put me in a coffin, sir?”

The second single was “Six Feet Deep.” Not to take anything away from the many other heartfelt rap requiems, but the commotion of “Six Feet Deep” is hard to match. From the beginning, when a slowed down sample of Marvin Gaye’s lament “There’s far too many of you dying” from “What’s Going On” precedes a similarly decelerated Commodores “Easy” loop and somber, sluggish drums, the Geto Boys recreate the unreal feeling a loss leaves behind. And then the rappers begin to fill the void with reflections that are as vivid as they are stinging. Scarface:

“June 28th was the date
.38 to the chest plate
Mommy dear’s cryin’ at the wake
And everybody’s dressed up in black suits
goin’ to pay their last respects to the black troop
Why’d he have to die is the question that we’re under
but everyone knows that every day’s a different number
So when your time comes, just remember, G
you’ll always have a place in this world as a memory
Especially my boys who passed away back in ’92
best believe that all the boys in the hoods got love for you
Wherever we go, wherever we be, we be thinkin’
of how we hung in the clubs smokin’ and drinkin’
Never missin’ out on a hood fight
cause everyday back in the hood we had a good fight
Everything has changed and people are lookin’ lonely
It’s gon’ be strange spendin’ New Year’s Eve without your homie
But ain’t much that we can do
except pour brew throughout the crew
to make sure we all remember you
And believe me it hurts
to see the boy you broke bread with six feet in the dirt”

After Bushwick Bill’s more broad observations fueled by his own survival instincts, Brad returns for the third verse to continue his recount of the funeral, escorting the deceased right to where the song title alludes to. Big Mike closes with a more traditional but still touching farewell. While it is Scarface’s stunningly emotional narrative that takes “Six Feet Deep” to the next level, ultimately everything about the track is outstanding, making it one of the most touching moments in ’90s rap.

As a group effort, it is a vast improvement over the opening “G.E.T.O.,” where the three struggle to find common ground over an underproduced, aggressive groove as each member references his own work, Mike even sounding like he still considers himself a Convict rather than a Geto Boy. And indeed, some of the best songs on “Till Death Do Us Part” are signed by Big Mike. “No Nuts No Glory” serves up two well-reasoned verses of get-back from the perspective of an ex-con who feels betrayed by his former business partner, all set to a professional Blaxploitation adaptation:

“I been sellin’ out the same dope house since the age of 16
Shufflin’ crack like cards to these burnt out dope fiends
Cookin’ rock after motherfuckin’ rock
Seein’ cop after motherfuckin’ cop on the block
Changin’ face after motherfuckin’ face
Watchin’ niggas catch dope case after dope case
Add it up and you’ll find mo’ niggas doin’ time in the pen
cause he wouldn’t snitch on his fuckin’ friend
And that same motherfucker that didn’t go to jail
wouldn’t come and pay his homeboy’s bail
But that’s the way niggas do ya
caught a case for another nigga and he swear he never knew ya
12 months in the county, you done got out and found out
that your homie runs his own dope house
And he ain’t gave you shit
not even a funky-ass ounce to get on yo feet, that sheisty bitch”

You’d be hard-pressed to find an equally intense rendition outside of the Geto Boys catalog, which makes Big Mike an eventually worthy stand-in for the irreplaceable Willie D. Still Mike maintained a certain independence, exemplified by “No Nuts No Glory”‘s line “I’m down with the Geto Boys but my mind ain’t playin’ tricks, bitch.” Rap-A-Lot was indeed so pleased with his performance that they provided him with extra exposure by releasing a video for “Straight Gangstaism.” Essentially a Convicts track, the clip added a Face verse, but the album version still perfectly stands on its own. Understated, fried keyboard funk serves as the tapestry for Big Mike and Lord 3-2’s recollection of how they took in the gangsta lifestyle as kids.

Five more slots are taken up by solo cuts. The ones by Face range from serious to silly. “It Ain’t Shit” is a boisterous, hood-hardened sermon over a roughed up Bill Withers groove. “Raise Up Bitch” is gunplay for grown-ups with a scratched hook including a few seconds of Tony Montana rage. “Cereal Killer” serves as comic relief without aiming for the real-life relevancy of Ice Cube’s ‘gangsta fairytales.’ Bushwick Bill however seeks inspiration in reality. It may be clever to go into gruesome details on “Murder Avenue,” only to disclose afterwards that “this song was inspired by Jeffrey Dahmer (…) so if you have an argument with me, then you should better judge him before you judge me,” but the Geto Boys had been there and done that, which makes the song a mere afterthought to “Mind of a Lunatic.”

Much more remarkable is Scarface’s “Street Life,” which along with “Six Feet Deep” introduces the emotionally stirred narrator that would emerge in “The World Is Yours” and “The Diary.” The song was written for the movie ‘South Central’ from the perspective of one of its characters, and if it hadn’t been recorded earlier in 1992 you’d have to assume it was Rap-A-Lot’s reaction to Death Row’s “Lil’ Ghetto Boy,” that’s how similar the tracks are. “Murder After Midnight” meanwhile is vintage Geto Boys and could even be seen as symbolically sealing their bond as Face and Bushwick embark on a hazardous mission to bail their new compadre out. They’re also all on deck for “This Dick’s For You,” which seems to add a satirical note to their brand of sexcapades, in the vein of certain N.W.A or Dr. Dre cuts.

Before Smith returns with the “Outro,” he packs the talent he’s amassed onto “Bring it On.” Clocking in at over 8 minutes, it features everybody from Oakland’s Seagram to Devin making his Rap-A-Lot debut (as a member of the Odd Squad). Even with Big Mike and Bushwick Bill absent, “Bring it On” remains one of the most potent posse tracks of all time and is not only the bigger brother of every Screwed Up Click gathering but also the granddaddy of these contemporary southern rap tracks that feature everybody and their momma.

The Geto Boys, both in name and nature, are rap icons. They don’t just reflect rap’s cultural background, they embody the means it employs, even to the point where radical becomes ridiculous. The 1993 incarnation was missing the clamorous, merciless voice of reason of Willie D, yet Big Mike’s contributions possessed their very own ghetto boy flavor. Bushwick Bill played a minor role, but he still came through on “Crooked Officer” and “Six Feet Deep.” Scarface would yet have to develop his lyrical complexity, but he began to get in touch with feelings other than anger and anxiety.

On the musical side, producers N.O. Joe, John Bido, James Smith and Tony ‘Big Chief’ Randle, assisted by key studio musicians Mike Dean, Roger Tausz and Preston Middleton, cooked up a thick stew of samples and original instrumentation, triggering a growth spurt for the label towards a richer, more distinctly southern sound. A gold album that almost cracked the Billboard top 10, “Till Death Do Us Part” is unmistakably Geto Boys. It was recorded at a time when things were still liable to get – lyrically and musically – messy at Rap-A-Lot, but as any connaisseur will tell you, that’s always been part of the charm.