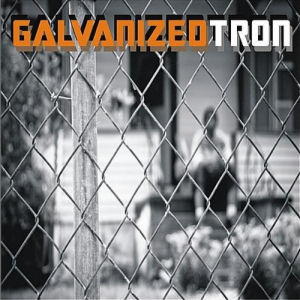 To the reader who saw the title of this review and immediately started thinking of Autobots and Decepticons, you’re not insane. In fact no less than a few minutes into the self-titled “Galvanized Tron” album, on the song “I Bust You Combus,” G.T. refers to himself as Galvatron for short. Even as a casual fan of the robots which are “more than meets the eye” the history behind this metal master of mayhem is so convoluted that any explanation I could give would (A.) contradict itself repeatedly (B.) be longer than this entire album let alone the review of it. Suffice it to say Galvatron may or may not be a future incarnation of Megatron who due to his rampant insanity repeatedly tries to conquer or destroy everything in sight, including cases where killing Megatron would in fact cause him to wink out of existence. A good primer on how you could kill yourself by changing your own timeline can be found in the Back to the Future

Speaking of insanity, Galvanized Tron dedicates a fair to significant portion of his lyrical flow on these nine tracks to convincing us he’s an “untamed beast, free to roam” wherever he pleases. G.T. is a force of nature, but he’s not an unfamiliar one. Intentionally or not he’s often reminiscent of Tech N9ne, and given both rappers are from the midwest some similarities may have been unavoidable. This is not detrimental to G.T.’s delivery, flow or rhyme-writing ability in any way – more rappers would do well to adopt the unconventional styles of Kansas City’s own hip-hop superstar. G.T. states his case well for being the next big rapper to blow across the plains on the song “All That Racket”:

“I’m sicker than your average, quicker than a rabbit
A slickster, a trickster, addicted to the habit
I’m spittin over tracks with, black magic
A big black bastard, my thinking cap is a magnet
I’m attracted to greatness, is this madness?
So I shall produce until I’m reduced to ashes
As if! From cervix from casket
I surface to masses, emerge as the baddest – at this”

Tron’s definitely a cut above the typical emcee in his wordplay, able to double or triple up syllable assonance and interweave his thoughts and concepts from one bar to the next without losing the thread. He’s also versatile in his breath control, able to swing to a triple time tempo with ease on “You Nasty,” stomp as hard as a Westside Connect vet on “Fe Fi Fo Fum” and spit with a pleasantly melodic rising and falling of his vocal tone on “Parasites in the Night.” Other than the opening track “I Bust You Combust” and “You Nasty” all of the songs are produced by Galvatron himself, who proves an able producer although not to be mistaken for Alchemist or Kanye West any time soon. Judging by the standards of self-produced rappers he’s a cut above, and the levels are EQ’d so that the rhymes never hide behind the beats, but songs like “For the O.NE” and “Loose Animal” sound like they’re imitating other regional styles and don’t remain that memorable after the album is over.

The bottom line is that for a relatively new artist on the scene (although his bio claims thirteen years of experience) Galvanized Tron is just fine – in fact much better than the norm for someone trying to get noticed on a larger scale outside the midwest he hails from in hip-hop. So few artists from that region of the U.S. blow to the degree of Common, Tech N9ne, Brother Ali or Twista that he’s got an uphill battle to become a rap superstar. He’s off to a good start though and could someday become more famous than his namesake, although hopefully his only insanity will be as a great mind-bending lyricist and not as a self-destructive robot bent on global conquest. He’ll definitely conquer a few ears on this self-titled release.