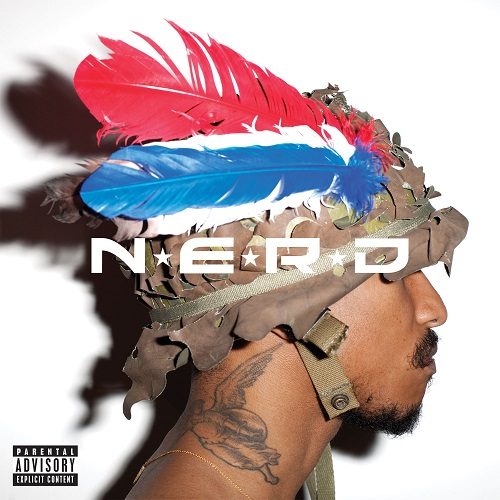 Any short list of hip-hop’s most influential producers over the last 15 years worth its salt would have to include Pharrell Williams. If that seems to be giving Chad Hugo the shaft, his creative partner in The Neptunes, you’ve gotten the right idea. Don’t mistake this opening paragraph for an indictment of Hugo’s work though, it’s more about Hugo’s fame as an artist. Pharrell is the one who puts himself out there in the spotlight, making solo albums and singing hooks for Snoop Dogg and Jay-Z. You could hardly be blamed for wondering what Hugo does when “Skateboard P” isn’t around to collaborate with, and that’s just talking about The Neptunes as producers. Once you get into their albums as rock/rap group N*E*R*D he’s still a star compared to Shay Haley, who is accurately described as “providing backup vocals” and who hasn’t done an interview anyone reading this review would even remember let alone care much about. Chad at least stands out as the band’s musician and architect of instrumentation among the trio, but let’s be perfectly honest about the whole endeavor – N*E*R*D exists because Pharrell exists. Without him there would be no point to the group whatsoever.

That is where the admittedly eclectic N*E*R*D hipsters both fail and succeed. Pharrell is so fascinating you could reflect sunlight off his head and mistake him for the moon in the night sky. He’s unabashedly sincere even when singing the most simpleminded lyrics, and speaking of that singing, he has a falsetto croon that no real singer would mistake for “talent” that’s still endearing to listen to. At various times Pharrell can remind you of any one of a dozen artists you like: Curtis Mayfield, Prince, Lenny Kravitz or Chris Brown. Does he come close to owning the muscle chords any of them do? HELL NO, but it’s amazing how well Pharrell makes what he’s got work despite his limitations. Part of it owes to a lack of pretentiousness. Mr. Williams doesn’t cover up his shortcomings with vocal layering, AutoTune, guest crooners or mixing himself so far down only Chad’s musical stylings and Shay’s backup singing are heard. He puts himself out there for better or worse, and ends up the better for it, yet N*E*R*D often find they are not taken seriously artistically. Common complaints about Pharrell’s lyrics include (but are not limited to) being overly simplistic, sexually crass, lacking profound insight and catering to a mindless partygoing generation.

“Nothing” is therefore the most aptly named album in the entire N*E*R*D catalogue. No longer is this a group “In Search Of” any deeper meaning in what they do. They’ve eschewed any pretensions of making political statements, noting on the single “Hot-n-Fun” that “this is stadium music, fifty thou’ jumping at a time.” What does releasing this album the same day as elections take place across the United States say? “Nothing.” What are you going to learn from the stylings of Chad, Pharrell and Shay? “Nothing.” What will elitist snobs say when asked to rank this album among the year’s best releases? “Nothing.” The only mistake among those three is the latter. Sure there’s nothing significant about “Nothing,” but there’s also nothing wrong with “Nothing” either. The album opens with an immediately fun throwback to the 1980’s with “Party People,” echoing the sound and style of Michael Jackson’s “Wanna Be Startin’ Somethin’.” I’m neither too high to get over or too low to get under what they’re working with and T.I.’s rap supports their vibe. It’s followed nicely by “Hypnotize U” featuring two Neptunes trademarks – big booming electronic beats and Pharrell’s phalsetto crooning:

“Just close your eyes, let me hypnotize you
I can make your storm feel sky blue
Girl when you lost you know I’ll find you
If I’m not beside you I’m +INSIDE+ you
I’m your doctor, this is your therapy
Your money’s no good, just take care of me
I found out it’s you, you my soldier type
But all that can change, let’s get loose tonight”

One of the statement records of “Nothing” is “Victory,” declaring the race won no one imagined they were in to begin with. Pharrell declares it something he can smell in the air, taste on his tongue, touch with his hands, and anyone who is good at “Seeing Sounds” can probably do all three quite easily. The curious thing onlookers will note though is that most rap-related declarations of victory declare triumph over haters and doubters, while Pharrell and friends are exhibiting no smugness and declaring no enemies defeated – they’re just happy to state “the limit is the sky” and keep on climbing. Their hardest hitting record is “God Bless Us All,” spiritually kin to the protest/pride songs The Roots covered on “Wake Up!” yet given the kind of heavy hip-hop context you would expect to hear Cee-Lo or Nas flowing on. Pharrell offers these simple but thoughtful sentiments:

“I bet this song, make no sense to you
With the world on your shoulders, what can you see?
God blessed us all, with the gift to pursue
Just clear your mind and, you’ll feel like me”

I have no problem enjoying “Nothing” even if N*E*R*D is what one fellow RR writer coined as “inoffensive background music.” There are so many musicians and rap artists out there today trying to be the best, the greatest, the most important and the most beloved that sometimes the most successful is the most inoffensive. What this trio achieves is a relaxed cool that seems deceptively effortless but is in fact carefully assembled and produced to achieve the maximum amount of mellow. If you’re not looking for an album that will change the world, but simply change your mood for an hour or two, there’s definitely something to be said for “Nothing.”