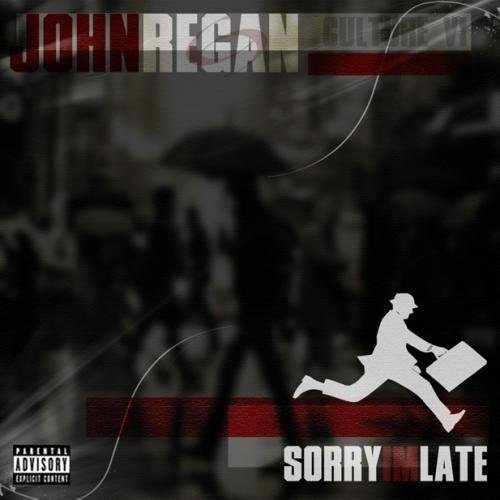 Sorry I’m late. No, f’real, sorry Wil. I told Culture VI Records that I would hold off my review of the advance copy they sent me on “Sorry I’m Late,” but I actually overshot my target and wound up being a week past the drop.

The good news about that is I had another whole week to appreciate what John ‘Poizun’ Regan and his producer YZ were doing on this album. That’s not the YZ you’re thinking of – the seminal early 1990’s rapper who did songs like “(So Far) The Ghetto’s Been Good to Me.” No, according to the press release Wil included with this album, this YZ is a producer who learned his craft from Chucky Thompson and worked alongside Young Guru before graduating to the pros and crafting tracks for the likes of Lil Wayne and Wyclef Jean. Despite being the second YZ on the block he’s definitely #1 in the beats department, as evidenced by the subtle and beautiful strains of “Yesterday” featuring Joell Ortiz. Regan could have easily been overshadowed by the presence of Ortiz on the track, one of hip-hop’s fastest rising stars, but his bars hold their own:

“Either we’re at the bottom of the sky, or the top of the planet
It all depends how you lookin at it (it’s all perspective)
Glass half empty, they say I laughed last
But I been already used up that last laugh in me
It’s hard, God wanted to see what I was made of
See if I would fold (fold), see what I’m afraid of
If I’d have gave up, I’d have left my wife
in that same situation that I was in, uhh
And even though me and my Uncle had our ups and downs
It was love, that see-saw never touched the ground
And I could deal cause I never knew my dad
For Grams, I wanted to die, but you was doin battle
When you said you was scared, I held your arms
And when I think about it, still feel the web of your palms
I can’t believe it, you’re gone, nothin left to say
It’s so long but it feels like it’s yesterday”

As you’ve no doubt gleaned by now John ‘Poizun’ Regan is not the latest punchline rapper, underground hero, super thugged out representer or complex verbal linguist. He doesn’t fall neatly into any of the cliched rap stereotypes – he’s got some different shit to say and isn’t afraid to tap into raw emotional experiences to say it. What’s rare is that for a relative newcomer in the crowded hip-hop marketplace is that Regan has some incredibly strong guest star support to back him up. Marsha Ambrosius provides some lovely bars on the hook of “All I Got to Give” – arguably a spiritual successor to “All That I Need.” Jaiden and Skyzoo both come on the track “One Day in Heaven” and rise with Regan to a YZ beat that comes straight out of the crooner soul of the 1970’s (I half expect someone to cry out “WELL WELL WELL” at any second). Long time conspiracy theorist indie favorite Ill Bill joins Juganot for the dirty and rugged sounding “Devil’s Eye.” There’s even guest production on this album as 88-Keys and Nottz join the party on “Nobody’s Somebody” – a song with dirty echoing drums reverberating all the way from Africa.

A word now about Regan’s style – he delivers almost every syllable in a breathless “this could be the last word I ever wrote” fashion which sounds like a cross between Canibus and Nas. For me this makes for a compelling album, but I could see some listeners getting burned out on it by the time 60 minutes have come and gone. Still it’s hard to argue with the quality of the songs production-wise, in terms of Regan’s thoughtfully written lyrics, or the stellar selection of stars he chooses to work with. Even though PackFM isn’t the biggest name to the mainstream, there’s little question I popped to see his name or hear his bars on “Paint the World.” Ironically this points to one of the few flaws of this CD if you could call it one – there’s almost nothing here that screams radio play or crossover material. I’m fine with that as pop radio is always late to the party anyway, although in some respects “Sorry I’m Late” is so late in hip-hop it’s actually early. In other words, it traveled forward to the future, broke through the cosmic curtain, and now the album is actually well ahead of its time.