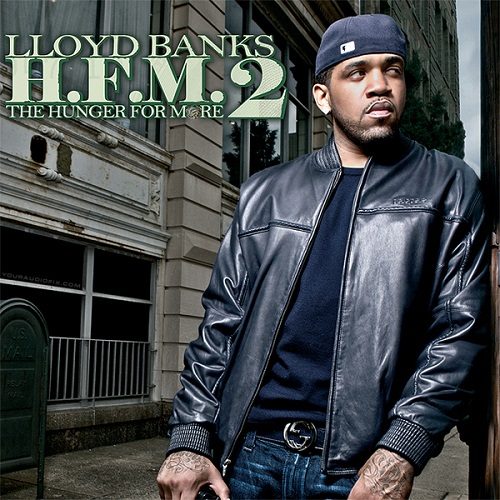 Lloyd Banks :: The Hunger For More 2

Hip hop is a big thing now. Might sound obvious, but in a week such as this, you really begin to realise just how massive and all-encompassing a monster it has become. You could pick up Kanye West’s fifth album – rated a classic by pretty much everyone; there’s the Young Money upstart, Nicki Minaj – already, in some regards, the most successful female rapper for almost a decade; for the more casual fan, a Greatest Hits package from Jay-Z, undoubtedly one of the greatest rappers of all time; or a sequence to an underground gem from Curren$y; finally, a long lost collection from one of the best, killed in his prime, Big Lâ€¦

Out of all those choices, however, you could successfully argue that not a single one of them is a straight-forward, mainstream, “traditional” hip hop LP. Kanye’s is great but nine minute songs aren’t everybody’s bag; Nicki’s is bordering on pop music and R&B for half of the album (at least); you’d be almost certain to already own Jigga’s hits; the other two could hardly be called “mainstream.” Which leaves a big old Lloyd Banks-sized hole in the market. Here we have “The Hunger For More 2” – a sequel to his commercially successful debut (which sold 600,000 in the first two weeks, pardon these exclamation marks!!!). It has hip hop beats. It has intricate lyrics and flows. It has a lengthy roster of guest rappers that rap, and guest singers that sing. It has hit singles. It’s almost like it’s 2004 all over again!!!

There are only about two songs out of the thirteen on here that DON’T feature guests. Otherwise, we have guest rappers including Tony Yayo, Styles P, 50 Cent, Pusha T, Juelz Santana, Kanye West, Fabolous and Raekwon. There’s even a bonus track with Eminem on some versions. Yet, Banks manages to keep a handle on proceedings, retaining the main narrative voice. In fact, at times he spits sheer venom at accusations that he was being dropped from Interscope, treated as just a side-kick, or the continual slide that G Unit has facedâ€¦ You name it. Wisely, he uses it as fuel to propel both the lyrics and the album a whole. This is a short, sharply focused “sequel” that may not be as complex or epic as Kanye’s latest, or as melody driven as Minaj, but it does exactly what it says on the tin.

You’ll be copping this for the lyrics, the hard-edged beats, the street sensibilities and, of course, the singles. Way back in February, “Beamer, Benz or Bentley” was released – it ended up being a genuine club smash, with an incessant beat and repetitive chorus, the perfect radio fodder. Followed up by a solid enough tune for the ladeez (“Any Girl” featuring Lloyd), the scene was set for another street banger, this time the exemplary “Start It Up” featuring West, Loso, Swizz Beatz and Ryan Leslie. It may not be a viscerally brutal as BBB but it is, in other ways, even more satisfying. Leslie pops up again on “So Forgetful” and kills the chorus (if you’ve seen him live, you’ll know what an underrated talent he is).

As for the other guests, some are more successful than others. Amongst the positives, Styles P and Raekwon stand out; the less effective features include Banks’ G Unit compatriots Yayo and 50, not to mention Akon on “Celebrity.” But nobody truly outshines Lloyd Banks, nor do they drag him down. He’s determined to deliver his vision, and – perhaps for the first time – you can tell that 50 has probably had limited creative input. The result is consistency sans the gloss that Jackson brings, and whilst it doesn’t always come off (“On the Double”), it usually does the job admirably (“Father Time”). There is a nice blend of songs, though not sequenced particularly carefully, but due to the brevity, fans of the harder side within hip hop should find plenty here to keep them occupied.

Frequently the best music is that which creates a mood. Banks recognises this, and most of the tracks here have a dark, menacing undertone, matching his gravelly voice well. Occasionally, that can make catching precisely what he has said a bit of a chore, but luckily, the music is good enough to mean that repeats listens don’t suffer the same fate. I’d be lying if I said this is album of the year, or that I’ll be listening to this LP in a few years time (because I won’t) but it does the job admirably for the winter months, and it contains a few five star highlights that I’ve really taken to. More than that, Lloyd Banks is an MC that takes real pride in his lyrics, his flow and his punchlines. In this week, a week that so aptly sums up hip hop’s expansive reach, it is good to hear that a few of the “traditional” tenets of this great genre are still important to some people. And if the music had been a bit more “Beamer, Benz or Bentley” and “Start It Up,” this would have been even more essential. But “The Hunger For More 2” is still a solid and enjoyable album, and one that Banks can be proud to call his own.