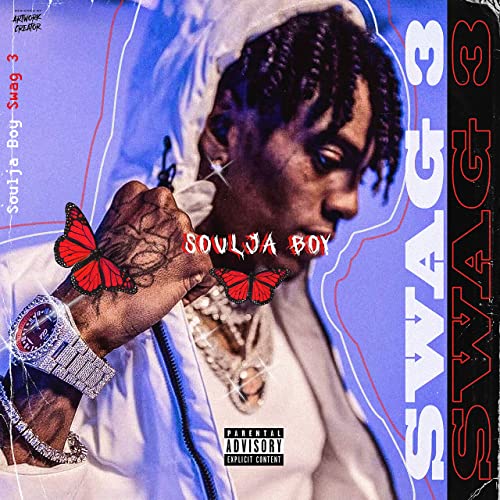 Its been five years since Soulja Boy released “Loyalty,” but DeAndre Cortez Way has never really gone anywhere. You may remember his failed attempt to sell bootleg video game consoles, or his feud with YouTube celebrity turned boxer Jake Paul, or any number of public beefs with other famous rappers. I mention all of this to give Soulja Boy the credit he deserves. Whether you like Mr. Way or not he’s incredibly good at keeping his name circulating in the public consciousness, to the point that people who have never even heard “Crank Dat” know who Soulja Boy is.

In December 2020 Soulja Boy dropped “Swag 3” on his own Stacks On Deck (SODMG) label. I was previously under the impression that the label went defunct back in 2016 when he dropped EVERY ARTIST he signed to it, but obviously he could still use it to put out his own music. One of the things Way doesn’t necessarily get the props he deserves for is the fact he changed the game with internet marketing, naming his national debut album after his website and vice versa. A lot of artists have since blatantly copied his viral come up with varying degrees of success, but now it’s Way who is doing the cloning on songs like “Trenches.” The pitch corrected vocals and syrupy delivery make him sound like every new rap star to come along in the last few years.

That’s not all though — Soulja Boy is also copying their penchant for creating incredibly short tracks. Songs like “Round Town” aren’t even 90 seconds long. That’s a shame because the track has a nice bass thump and I was just starting to get into it before it came to an abrupt and unwelcome end.

I don’t consider either of these things to be a great change in direction for Soulja Boy, who already had a hard time putting together songs that were as compelling lyrically as they were musically. Now he’s seemingly abandoned the attempt altogether, preferring to put together “moods” rather than songs. “Celine” might as well be his Juice WRLD mood. “Rolling in Bugattis/pockets sloppy/pockets nasty/she call me daddy.” You can’t really call these lyrics, but you can certainly recognize the style of the singing.

The unintended consequence of “Swag 3” is that you wind up missing the early era of Soulja Boy records from the mid to late 2000’s. While he wasn’t ever a wordsmith nor an incredible storyteller, he did at least have a knack for making rap songs with actual rapping and catchy hooks. That’s what made it easy for Soulja Boy to go viral back then — songs that were easily imitated and easily co-opted into memes. There’s nothing meme-worthy about “Swag 3” though. It’s just a reminder that at this point in his career, Soulja Boy is famous for being famous, and it’s quite possible he can coast on that for another 10 years whether he ever boxes with Jake Paul or not.