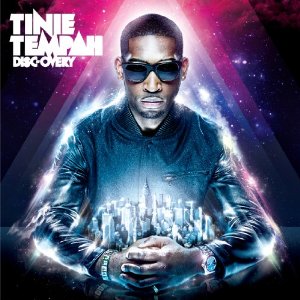 I feel like I owe Tinie Tempah a bit of an apology, for various reasons. Firstly, one of his singles in the summer of 2008 was sent into RapReviews for me to cover â€“ unfortunately, that very week I was taken seriously ill, and the CD got lost in the melee, never to be found again. Then, he released “Pass Out” at the beginning of this year, and I dismissed it almost immediately â€“ that is, until the perfect beat started worming its way into my brain. Finally, I was all set to review this, his major label debut album, but he released it on my birthday and I got rather drunk.

That might be the most unprofessional opening paragraph I’ve ever written for a review, but it serves as a reminder that Tinie Tempah is the kind of guy that gets ignored, passed over and ridiculed. Then, a funny thing happened: he won. “Disc-Overy” went to the top of the charts, and it contains four Top 5 singles, each of them genuine smash hits. At the beginning of the year, he wasn’t even a credible threat, but by the end of it, 2010 was his for keeps. At the age of just 21 (he only just turned 22 this month), he now has a clear path to genuine super-stardom.

That’s not without various caveats, however. Just as “Illmatic” proved an anchor around Nas’ feet â€“ meaning that fans continually reference how great it was, and how the new albums never reached those heights â€“ Tinie Tempah is sure to face the same dilemma thanks to “Pass Out,” a single so perfect that it will go down in legend, a UK version of “Nuthin’ But A â€˜G’ Thing” and “In Da Club.” Produced by Labrinth, it is a 91bpm treat with a deceptively simple drum roll, an insistent bass line and pulsating synths. Coupled with a brilliant duel chorus, Tempah spits bizarrely humorous couplets that first come across as amateurish, then as somewhat inspired. He has a thoroughly unique voice, and the ability to pick out random pop culture references, making them fit perfectly. You wouldn’t realise it, but Tempah has actually helped in the long-term evolution of rap, even if it seemed like he was holding it back.

Before this turns into “An Ode to Pass Out,” perhaps now is the time to mention that “Disc-Overy” is an extremely successful album. Out of all the new wave of UK rappers that have found massive success over the last 18 months â€“ let us leave out Dizzee Rascal, as he is already four albums deep in the game â€“ this is perhaps THE most realised of the bunch. That means commercial artists such as Tinchy Stryder, Professor Green, Example, N-Dubz and Chipmunk have all been leapfrogged. What Tempah and his team have done is to incorporate the more successful elements of American hip hop and make it their own â€“ whilst all of the aforementioned artists (apart from Dizzee) have basically made Hip Pop albums, with chart-baiting singles and ultra-commercial album tracks full of, it must be said, pretty vacuous lyrics (Green being the exception, but only just). Tinie Tempah had the good sense to incorporate elements of his own life, take the fans on a journey and do it all over a balanced mix of hard hip hop/grime tracks and melodic pop/R&B numbers. It makes for a consistent and even listen.

If the opening four tracks of any album set the tone for the rest of it, Tempah puts on a masterclass in how to draw in the listener and keep their attention. The first two are a combined introduction, with stream-of-consciousness raps, a catchy but understated chorus and unbelievable instrumentals (“Intro” leading into “Unstoppable”). It builds up nicely for “Pass Out,” which is then followed up by the superlative “Illusion” â€“ another incredible beat and chorus providing TT with a platform to spit inspirational, confessional lyrics. After such a strong opening, “Just a Little” is a disappointingly syrupy R&B number that teenage girls will adore, but few else (the sequencing of it seems strange). “Snap” is a clever concept about storing memories on his “micro SD” â€“ of course, the memories are basically about girls he went to school with (fair enough), but it works well in combination with an early 1990’s throwback beat.

That takes us to a sequence of three charting singles: “Written in the Stars” is the prerequisite “WE NEED A WHITE DUDE ON THE CHORUS” song, similar in feel to Lupe Fiasco’s “Superstar” but a lot more in your face. It actually works well, thanks to the impressive verses and epic production. Next up is “Frisky” â€“ again, produced by Labrinth, is retains many of the tricks that made “Pass Out” so inescapable, and adds in a “la-la-laa-la” for good measure. Finally, “Miami 2 Ibiza” is a joint single with Swedish House Mafia that, if truth be told, is a pretty blatant rip off of any Dizzee Rascal and Calvin Harris joint, but it just about gets away with it. Regardless, it means that the crucial core of the album is jam-packed with hits, allowing him to express himself more riskily in the final part â€“ a display of excellent and thoughtful sequencing.

“Obsession” kicks off the final part, and although the sentiment is in the right place, it’s not an unqualified success â€“ the beat is solid enough, but the synergy between Tempah and track isn’t quite as locked on as the rest of the LP. “Invincible” features Kelly Rowland, and is basically Tempah’s version of T.I.’s “Live Your Life” but again, it’s just not quite there as â€“ perhaps for the first time on the album â€“ he doesn’t sound at all original. Whilst the track isn’t a failure, it is a pale imitation and Rowland sounds non-committal. The penultimate song features Ellie Goulding, and is possibly the best song on the whole album â€“ quite a claim, but “Wonderman” is genial, with LABRINTH (by this stage, he deserves CAPS LOCK treatment) again turning an absolute gem of an instrumental. It’s no wonder that Simon Cowell has signed up Labrinth to his SyCo record label. It also provides the natural conclusion to “Disc-Overy,” even if “Let Go” is an interesting enough emo-rap Eminem/Weezy type of track.

The first listen of this album is solid enough, but after a few spins you begin to believe that Tinie Tempah is the best all-rounder of the lot, and has churned out the best all-round album too. It’s not perfect, but it hints at a glittering future. It has some outstanding musical qualities, an author with a unique voice, a solid enough narrative and hit singles. It also shows that he is a humble artist, eager to learn from the greats and, hopefully, improve year on year. He has also managed to retain part of his past, whilst staying current and setting trends. It is important that he keeps progressing, stays hungry and, as previously mentioned, isn’t held back by the success of “Pass Out” in the long-term. But something tells me that Tinie Tempah could be destined to dominate this decade, and, perhaps, make a splash internationally too. He is on the right path, that much is certain.