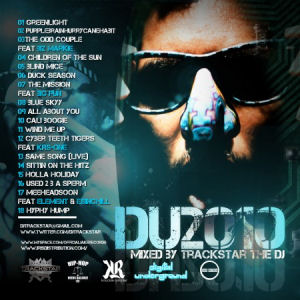 This mixtape was released to promote Digital Underground’s “Greenlight EP

” released this year by Jake Records. Wait though – didn’t D.U. announce they were officially disbanded two years ago? You’re not mistaken – after a 20 year span in hip-hop the Oakland rap funkateers closed their careers with one final album titled “..Cuz A D.U. Party Don’t Stop!” As it turns out though there was enough leftover unreleased material for a posthumous EP, and to hype up the public for its release Trackstar the DJ stepped in for this officially commissioned sample of old and new D.U.

Now the phrase “old and new D.U.” does need a little bit of clarification. There are undoubtedly some readers who are old enough to remember when “Sex Packets” first came out, who may have even done the “Humpty Dance” at a high school party or college fraternity jam. A few others may have gone back and checked out after hearing raves about how the album is a hip-hop classic. Unfortunately the group was both blessed and cursed by the phenomenal success of that first major label album, as critics and fans alike expected a new “Humpty Dance” on each successive release. Digital Underground frontman Shock G was more than willing to don the comically playful nose and do his nasally flows, but he didn’t put out “Humpty Dance 2” or any songs which could be considered sequels even without the numerical tie-in. As such a fickle public tuned out even as the Underground jumped record labels and continued to release musically interesting albums like “The Body Hat Syndrome” and “Who Got the Gravy?” That’s one among many reasons the group ultimately wound up disbanding in the 21st century.

When reading this review and coming upon the phrase “old D.U.” the term is entirely accurate, but you’re not hearing anything like “Doowutchyalike” or “Freaks of the Industry” on this CD. Rather what Trackstar the DJ and Jake Records decided to work with on this album is songs from the more obscure albums which were in fact digitally underground to the musical mainstream. The quality of the songs is not lacking just because platinum plaques and magazine accolades didn’t accompany them. “The Odd Couple” featuring Biz Markie may be one of the funniest hip-hop battle duos ever put to wax, as Humpty and Biz battle each other over who is the uglier rap star: “Humpty your nose is like a two car garage” and “At least you never catch me wearin wigs in my videos!” until they both conclude “Why can’t we just get along?” Even hardcore Big Pun fans may have slept on his Digital Underground cameo on “The Mission,” but Trackstar dug up this classic and its Barry White “Playing Your Game, Baby” samples to give it the shine it deserves.

“Yo what the deal Shock? (Love yo)
You know me, keepin they heels cocked
Still round cause I’m down, 400 lbs of steel cock
You feel hot I warn you, what? I never call you slut
or diss you that’s why my initials is on your butt
I get it up when you need it, promise I’ll never beat it
Satisfaction guaranteed it, twice as hard if you eat it
My style’s comedic, but in the bed ain’t nuttin funny
I’m bustin your bunny and leave you smothered with nuttin but honey”

R.I.P. Pun. From the same slept on D.U. album, Trackstar includes tracks like “Cyber Teeth Tigers” featuring KRS-One, the silky smooth “Blind Mice” and the slow riding SUPER CHUNKY “Holla Holiday,” as good a G-funk West coast ode to partying as has ever been conceived let alone laid down over a Public Enemy sample. The “Party Don’t Stop” album gets some shine for the left coast too though with the “Cali Boogie,” giving Money B some star shine as he lays down slick rhymes. He’s also spotlighted on a shortened version of “Children of the Sun.” A much longer slice of “Blue Skyy” from the same album is included (almost 4 out of almost 5 minutes). From the new EP you can hear almost the entire “Sittin’ on the Hitz” track as well as a sizeable portion of “Hyphy Hump,” which playfully mocks both the original dance hit and Nelly’s “Hot in Herre” while rolling to a stripped down synthesizer flow.

“DU2010” is one of those curious albums you see from time to time that’s significantly more than just a mixtape, yet still not quite as much as a full album. It can’t really be called “Greatest Hits” considering it leaves out the most well known D.U. tracks like “Same Song,” yet it could almost be called “Greatest Misses” and would succeed far better at that concept than Public Enemy did. Either way it’s fair to say this album succeeds at two different goals as opposed to just one – it will generate more interest in the new EP of previously unreleased material AND in some of their material from the 1990’s that fell by the wayside due to lack of public appreciation and space at retail locations. It’s good that all of these songs get a second look.