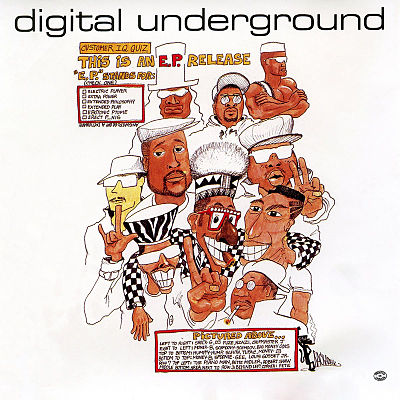 Digital Underground :: This Is An EP Release

When thinking about Oakland, California’s own Digital Underground, the old adage “Timing is everything” comes to mind. I honestly don’t think that a new group with the same characteristics as D.U. would have the same success today that D.U. enjoyed when they emerged onto the scene. Digital Underground was a capricious and playful alternative to much of the music that was coming out of the West Coast at that time. Much like Parliament-Funkadelic, who had influenced the group, the lineup of D.U. was always changing. Shock G (and his many alter egos, including Humpty Hump) and Money B were the only constants, but there were key contributions from DJ Fuze, DJ-JZ, and a certain up and coming rapper named Tupac Shakur.

D.U.’s debut album “Sex Packets” featured the songs “Doowutchyalike” and the monster hit “The Humpty Dance”, the latter of which will still get the crowd hype at any party. D.U.’s stock rose to the point where they landed an appearance in Dan Aykroyd’s film “Nothing But Trouble”. Two of the songs from the soundtrack were included on Digital Underground’s second effort, aptly titled, “This Is An EP Release”. The other songs that make up this EP are remixes for two songs and an extension to one other song from the “Sex Packets” album. The lone entirely new song on the EP is “Nuttin Nis Funky”.

The EP opens with “Same Song” and I don’t think that it’s too far out of line to say that if you’ve never heard this song at least once, it’s either because you’re too young, or have been in a deep sleep beneath a very huge boulder for quite some time. The video features the crew at a drive-in theater decked out in various wardrobes from around the world and clips of the aforementioned film. Seeing Shock G and Humpty Hump on the screen at the same time only added to my childhood confusion, as I didn’t find out they were the same person until a few years later. In any case, the chemistry between everyone involved makes the song an easy listen as Humpty and Shock lead while a young background dancer named 2Pac brings up the rear:

Humpty Hump: “Hypothetical, political, lyrical, Miracle Whip
Just like butter, my rhymes are legit
Cause I’m the Humpty. not Humpty Dumpty, but Humpty Hump
Here a hump, there a hump, everywhere a hump”

Shock G: “Ahh shut up and just listen
Not dissin’ don’t get me wrong
But to me it’s just the same old song
So just watch, my name is Shock, and I like to rock
And you can’t stop this
2Pac go ahead and rock this”

2Pac: “Now I clown around when I hang around with the Underground
Girls used to frown, say I’m down, when I come around
Gassed me and when they passed me they used to diss me
Harassed me, but now they ask me if they can kiss me
Get some fame, people change, wanna live they life high
Same song, can’t go wrong, if I play the nice guy
(Claimin’ fame must have changed now that we became strong)
I remain, still the same (why Tu’?) cause it’s the same song”

The other song featured in “Nothing But Trouble” is “Tie the Knot”. A stylized piano rendition of “Here Comes The Bride” plays, while the crew sings an off-key chorus of “da-da-dah-dah”. Lyrically speaking, the song questions the decision to get married. The remix to “The Way We Swing” differs slightly from the original due to a sample of Earth, Wind & Fire’s “Devotion” and the addition of vocals from Money B that shadow the original vocals of Shock G. The other remix is the Worth-A-Packet remix of “Packet Man”, which comes off a lot jazzier and smoother than its predecessor. Here, we have Shock G making a pitch to Humpty Hump, trying to sell him a few packets. For the benefit of those that are unaware, a packet consists of a pill that induces sexual satisfaction and comes in a variety of situations such as “young black virgin” or “Blondie”. On “Nuttin Nis Funky”, Shock and Big Money Odis trade rhymes back and forth, with an assist from Humpty towards the end. The song goes on for nearly ten minutes as they let any naysayers know just how funky it really is:

Big Money Odis: “Cause I roll up fast, like a cheetah, get out the two-seater
Walk up on a girl named Anita, or Rita
Ask her for change to put money in the meter
Didn’t really need it just a smooth way to meet her
Or a fly way to treat her
She said, “I’m hungry” so I took her out to feed her
She was a pocket feeder chicken, fajita pita eater
I said, “Yo, eat how ya like” then took her home and G’d her”

Shock G: “The definition of a funky rhyme master
Cleverly put together but not necessarily sayin it faster
Ya see, that style isn’t hard at all
The object of the game is to have a ball y’all
And to see who can come the funkiest
Lot of MC’s think it’s just a speed contest
They wanna brag about the neighborhood, oh you wanna boast?
We come from different cities and we’re coast to coast ya see
But right now we’re based in Oakland (Odis: Oakland)
Everywhere we go we leave the microphone smokin’
Yo bro I’m not jokin’
Leave MC’s standin’ still with their mouths hangin’ open
Walk offstage and leave the next act scratchin’ his head like a monkey
Cause you ain’t heard nuttin’ this funky”

The EP closes out with “Arguin’ on the Funk”, which uses the same beat as “Rhymin’ On The Funk” and starts off with Humpty asking Shock why he and Money B decided to call the original song “Rhymin’ on the Funk”. He insists that Shock and Money were just being lazy and uncreative, but Shock tries to explain to Humpty that they were paying homage to the Funk Mob. This was the collective that made up the Parliament-Funkadelic sound. An argument ensues between Shock and Humpty, which continues until the track fades out.

While “This Is An EP Release” is best utilized as a companion to “Sex Packets”, it has just enough juice to stand on its own. Even if the debut of 2Pac weren’t enough (see the previous pun), this extended play shows that rap can be fun while being funky. The yin and yang harmony between Shock G and Humpty Hump is always a joy to listen to, and is sure to attract new listeners to the Underground for many years to come.