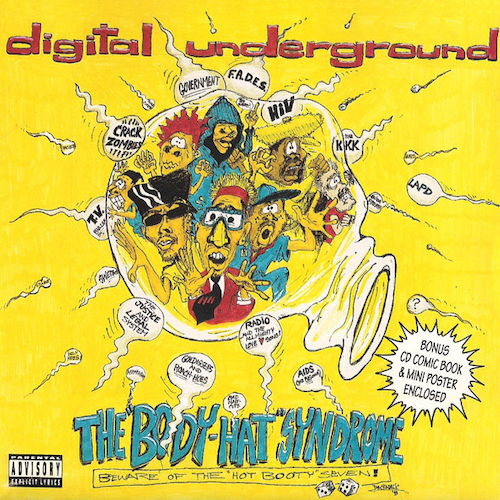 As introductions to a new Digital Underground album go, “The Return of the Crazy One” was about as good as it gets. Featuring P-Funk samples from both “Aqua Boogie” and “Up for the Down Stroke” plus an extra manic performance from Shock G as his alter ego Humpty Hump, the only thing that held this single back from charting higher was a sexually explicit music video and some borderline “hookers can’t make me cum/come … around their way” double entendre that would scare off nervous Nellie radio stations.

Unfortunately “holding it back” would be par for the course on “The Body-Hat Syndrome”. No single from this album charted higher than “Crazy One” on the Billboard R&B charts at #77, a poor performance compared to “Same Song” from “This Is An EP Release” let alone the MASSIVE crossover success of “Humpty Dance” from “Sex Packets“. That success was parodied on this album with “The Humpty Dance Awards” noting the massive number of songs that had already sampled it. Tupac Shakur historians will also note his cameo appearance here as an award presenter.

Shakur also appeared on the mellow and almost mournful “Wassup Wit the Luv?” single. Although 2Pac never formally announced a split from Digital Underground or vice versa, his star was quickly rising to the point that D.U.’s cameo on “I Get Around” was for many people THEIR first exposure to the group rather than the reverse. Built on samples from Prince, James Brown and Mountain plus the Underground’s own unique instrumentation and keyboards, every single element was in place for a hit. The earnest sincerity of the song may sound “try hard” by 2019 standards, but given the L.A. riots a year earlier in response to the Rodney King acquittals, it’s not hard to read the song as a response to both.

This is where our review takes a dour turn. If you know “The Body-Hat Syndrome” you either know it for this song or “Crazy One” — the album has otherwise almost completely vanished into the ether. As a self-confessed D.U. fan I find that to be a damn shame given this is a 74 minute release that has a lot of sleeper tracks. A personal favorite is “Carry the Way (Along Time)” featuring Saafir the Saucee Nomad. Saafir’s trademark on/off beat flow was in full effect on his bars: “I feel like a steel belted radial tire/cause I’m, wired when I’m rolling”.

I can be honest though and see how and where mistakes were made. Let’s start with the album cover — seeing a condom being attacked by cartoony sperm is kind of gross even if it’s a metaphor for all the things D.U. is protecting themselves from by wearing a jimmy hat (crooked cops, the Klan, et cetera). They couldn’t let go of the metaphor on the album though and pushed it into three “Body Hat” skits, which is arguably excessive. Although Digital Underground made a name for themselves with playful sexuality on songs like “Doowutchyalike,” there was little chance a three track story arc (complete with “Entrance” and “Exit”) about masturbation was going to find as many fans. “Lay it in your palm and you don’t need a condom” quips Shock G on “Jerkit Circus”, which is fine sentiment albeit a terrible rhyme, and singing “pop goes the bozack” to the melody of “Pop Goes the Weasel” takes an already absurd song WAYYYY over the top.

Despite these missteps there’s still plenty to love on this overlooked Digital Underground album. “Doo Woo You” is exactly the kind of slick sly funk that Shock G and family do best. “I’m from the dark side and I’m fortified” is the kind of come on that may only make sense in the song’s context, but it still sounds cool as hell. “Dope-A-Delic” borrows heavily from P-Funk while simultaneously making fun of people who copy it (and the group) in lame and uncreative ways. I’ll never understand why they didn’t at least ATTEMPT to make “Shake & Bake” a single. A perfect Erick Sermon snippet and perfectly silly opening Humpty Hump verse set this song up perfectly, complete with an over-the-top impersonation of Busta Rhymes.

“The Body-Hat Syndrome” is undoubtedly flawed in some significant ways, but it’s also an album that has aged well over the last 25+ years, given that trademark Digital Underground funk that brought them to the heights of popularity during my high school years. If you slept on this album then because it didn’t have a “Humpty Dance” sized hit, or because 2Pac had become bigger than the group he used to “clown around” with, maybe now is your time to give it a second chance. If you were completely unaware of D.U. before this review don’t start here — check out “Sex Packets” first.