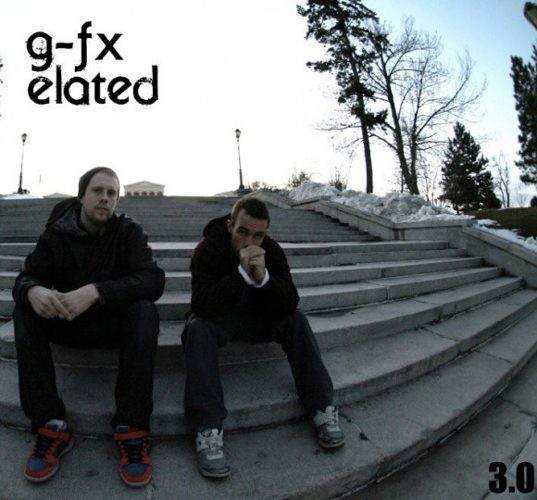 Live and direct from Buffalo, home of the buffalo wing, comes hip hop duo G-fx. G-fx is a collaboration between producer Cufx (pronounced “suffix”) and rapper G-wza. Their bio describes them as real hip hop heads whose influences range from classic hip hop to jazz to world music, and states that they are striving to innovate while staying true to the essence of hip hop. That’s a fair description of their sound.

The duo sets the mood on “Matter,” a slow, bluesy dirge complete with a hook sung by someone who sounds like Tom Waits. G-wza proves himself to be a rapper not afraid to drop some deep thoughts:

The album continues on that trajectory: Cufx drops moody beats and G-wza drops introspective rhymes. Cufx’s production is solid from top to bottom. “Dupa88” rides a funky organ riff; “All I See” loops a melancholy piano chord; “Rolla Coasta” and “Today” both use an acoustic guitar; “Skyline” uses world music samples. Cufx excels at mixing acoustic elements with dusty breaks to create beats that are exotic yet true to hip hop. They aren’t the most banging beats on the planet, but they provide a mellow, slow burn.

G-wza is an honest, passionate rapper who spits rhymes that take a hard look at the world around him. Like Cufx, G-wza applies a hip hop framework to lyrical concepts that aren’t typical to hip hop. While he does rap about sheisty labels, sell-out rappers, and smoking herb, he also raps about the universe, the laws of physics, and trying to look at the world through a different lens. “Today almost gave up on my faith that the u-n-i would keep everything in its place,” he says on “Today,” one of the strongest tracks on the album. His unique subject matter is hindered by his odd flow. He raps in super-serious delivery, often gasping after each line. It sounds unnatural and affected, and killed a few of the tracks for me.

While I wasn’t feeling G-wza’s delivery, the combination of Cufx’s beats and G-wza’s unique lyrical content make “Elated 3.0” worth exploring if you are into left-of-center hip hop.