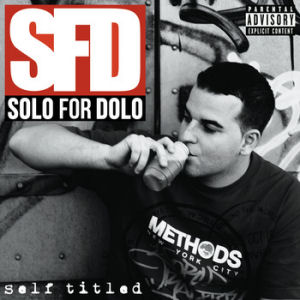 Solo For Dolo :: Self Titled

Solo For Dolo is an emcee from Asbury Park, New Jersey who has been rapping since before anyone had heard of Marshal Mathers. He released his first album “The Truth for the Youth” in 2009. “Self-Titled” is his follow-up. When you think of New Jersey, you probably think of Bruce Springsteen and guys who spend all their time tanning and working out. Dolo is here to show you that there is more to Jersey besides the Boss and Jersey Shore.

Solo is an underground rapper who divides his time between cutting down other rappers and lamenting his own state of affairs. On “Quarter Water Kids” he manages to both brag about being an amazing rapper and complain about being broke:

“Only thing certain is I’m headed for debt
I dropped my first LP with an unemployment check
Flipped my investment, but I ain’t done yet
So Ima give you all a second just to slaughter your deck
For the respect. my shit will slam through the damn monitor
Leaving as the opening act with some sad followers
Y’all wanna hate me? Fuck it, come join the club”

He also takes some time to celebrate his roots on “Asbury Rising” and “That’s Me,” describing what it was like to come up as a young white hip-hop fan in 90s New Jersey:

“Pops was a rolling stone
Fuck staying in one place
Moved all around the tiny state of NJ
The smog here will kill you twice as fast as L.A.
[…]
From that point on I was prone to acting up
Selling kids oregano to watch them act like they were fucked up
Calling me a wigger cuz I knew what Hilfiger was
And my best friend was black so my concept of white sucked”

Dolo’s combination of self-confidence and self-effacing humor works for him. He’s got confidence to not come off as pathetic, but is also able to poke fun at himself. “Talking That Bullshit” features a guest spot by producer Domingo talking shit about Dolo while Dolo asks “what’s in the water that’s got you acting cocky for no reason?”

Dolo is solid on the mic, and he’s helped out by equally solid production. Maker lays down some funky grooves on “Asbury Rising” and “Delilah’s Den.” Dolo himself provides some melancholy beats on “Virgo” and “Fallen.” Domingo supplies the strongest beats here, from the bluesy “Homecoming” to the soulful “Last Call” to the jazzy “Aerosol.” The latter is the strongest track on the album, and Dolo matches the intensity of the beats with his rhymes.

Solo for Dolo represents the best case scenario self-released rap. His beats sound good, he can rap, and he’s trying hard to rap with humor and integrity. There is a scrappy independence on “Self-Titled” that in the end makes the album a success, and worth checking out if you are a fan of underground rap.