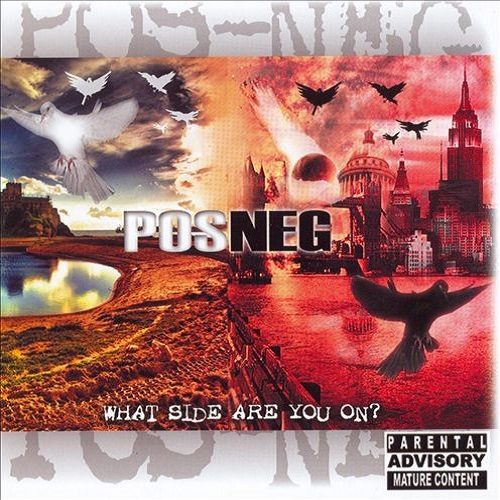 The South Bronx group called Pos-Neg are here to ask you “What Side Are You On?” (Baby Entertainment). It is a general question that every human being should ask themselves when faced with decisions and self-reflexivity. The notion that Pos-Neg are trying to make a difference communally, nationally and even globally with their record sales is commendable, but it must be asked where they fall on the hip-hop spectrum–positive or negative?

This LP “What Side Are You On?” is really a companion piece to a film that the group has put together that is on the Starz Network called “Off The Hook” . The film also attempts to split the positive and negative into a harsh dichotomy. Props go to the group for attempting the difficult task of composing a concept album in a generally shallow industry that endures many creativity lulls. However, despite the compelling nature of the album, it isn’t all biscuits and gravy while fleshing out the idea. The result is a double-disc expose’ that is balanced by 9 tracks per disc.

“In the Ghetto” is a 6:15 romp about the ghetto-lifestyle. It is a typical joint about how it is living in the hood–mostly a glorifying account with lines like, “If ya ain’t from my hood you get robbed and stomped, in other words, played like a punk!” The inquiry about this track is how exactly does this boasting track fall on the positive side of things? Everyone loves certain things about where they come from, but it is important to love the right things about it to avoid a kind of ignorant existence.

There are other lyrical inconsistencies like on “What’s Really Good,” which is a trite attempt to be radio-friendly. A stripped down, bouncy beat rides out into a repetitive loop as a member drops the contradicting line, “World renowned, underground.” The only group that can even come close to claiming that is The Roots and that would be a hard-pressed argument after “Things Fall Apart”.

The juxtaposition of the positive disc and the negative one is noticeable. The positive album features a majority of R&B influenced hooks with the aid of a songstress, whereas the negative album does not necessarily exhibit negative subject matter so much as it is more overly aggressive and battle-driven like on “Can’t Take The Streetz”.

The first single “I’m a Problem” is a decent choice with its DJ Khaled inspired brass-driven style. Apparently Pos-Neg has been showcasing this joint on college campuses while touring. The limitations of their song-writing is exposed with songs like this though as the hooks are usually a repetition of phrases like “I’m A Problem” and the rap subgenre that they fall into is almost entirely anthemic. The same misstep can be noted for the otherwise agreeable track “Not A Good Look”.

The members of Pos-Neg carry an album that is somewhere in-between the harsh distinctions of positive and negative, but their flows are imprecise and generic. There is not a line that I can pull out from the lyrics that make me think that there is some greater depth to their abilities and it is easy to question the possible longevity of a group that has named themselves after the narrative their debut album takes. Hopefully Pos-Neg stay true to what they clearly believe in by continuing to dish out 20% of their proceeds to the Direct Relief International charity. Like most things in life, the album “What Side Are You On?” fathoms deep into the gray area.

Pos-Neg :: What Side Are You On?
4Disappointing
Music4
Lyrics4