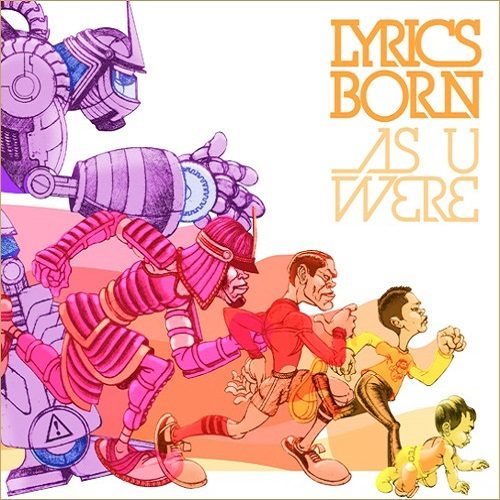 Lyrics Born :: As U Were

“You can’t put a peacock in a cage / it get mad when it can’t spread its wings.” That’s about as apt a self-description as any hip-hop vocalist has ever given. Equipped with an artistic wingspread that is impressive in both size and design, Lyrics Born needs creative freedom to find complete expression. Refusing to be limited by genre restrictions and industry expectations, he continues on his journey across the musical landscape as a solo artist supported by dedicated followers and a loyal musical family. While “As U Were” may only be his third official studio album, LB stays on his grind with tours, a well maintained website and smaller-scale releases.

In short, Lyrics Born has been around and his records reflect the experience. He is also faithful to the funk, a common denominator of most of his music. Featuring the lyric above, “Kontrol Phreak” opens the album with a hard-hitting interpretation of slick ’80s robot funk. It’s not a rap recording and it doesn’t have to be – because rap owes funk an awful lot in the first place and because funk possesses just the right attitude to tell off someone who continuously tries to pull strings.

“As U Were” is the kind of record that draws criticism from those that say that it’s all been done before (and better, in their opinion) and those that say the current output pales in comparison to the artist’s earlier work. Both have a point, but what they’re missing is that the Lyrics Born personality remains intact. Defining himself as an ‘m-singer’ (MC/singer) over ten years ago, LB projects his charisma across a broad spectrum of styles, combining hip-hop swagger and soulmanship in a varsatile, original package. Some might view him as another rapper who shouldn’t sing, others will find some of his rap flows a bit too esoteric. But those in the know know: This is LB. This is what he does. Who else swerves at breakneck speed across a track that alternates between early ’80s rap, soul-shouting, bass music and electro (“Oh Baby!”)? Who – other than Afrika Bambaataa himself – melds Soulsonic Force-style shout rap with Latin freestyle and Eurodance (“We Live By the Beat”)?

But not every track is a melange of miscellaneous dance styles. “Block Bots” is straight up post-hyphy, Trackademicks- and Clyde Carson-assisted Bay shit. “Coulda Shoulda Woulda” is symphonic disco funk supported by Down Under soul singer Sam Sparro. Single “Lies X 3” is a theatrical, dark soul tune in a modern pop outfit. Tracks like the melodically rich, dancefloor-friendly Latyrx reunion “Pushed Aside/Pulled Apart” or “Something Better,” which features recent Drake collaborator Francis Farewell Starlite (of Francis & The Lights), indicate that Lyrics Born’s musical philosophy is not that different from Timbaland’s or Mark Ronson’s. He’s still within safe distance from will.i.am territory, even if “I Wanna B W/U” recalls the Black Eyed Peas’ stylized ‘fashion beats.’

Fact is that in popular music the boundaries become increasingly blurred. Rap stars like Busta Rhymes and Snoop Dogg have long been multipurpose pop artists. Three of the biggest rap stars of the passing decade – Kanye West, Eminem, 50 Cent – have often been closer to pop than to hip-hop. Pop has a lasting habit of incorporating hip-hop elements. Lyrics Born is fully part of that movement, but he’s also been in it quite longer than most and to this day has been able to keep a certain grassroots hip-hop edge. Still “As U Were” is his most pop album to date.

Even taking into consideration that LB was going for a recreation of the music that inspired hip-hop, its pop aspects make it just a little bit less relevant to this RapReviewer, who could have been swayed by the inclusion of last year’s teaser, the tongue-in-cheek ’80s rap throwback “Funky Hit Records” but finds little satisfaction in the fluffy CD bonus track “(What Happened 2 Our) Love Affair?”

Pop music is a vast field with many highs and lows. The charts are an unreliable indicator of pop quality as the lows can chart high while most of the highs won’t chart at all. Lyrical substance is not common to the upper regions of the charts. With a couple of successful stabs at uplifting subject matter (“We Live By the Beat,” “Something Better”), contemplations about temptation and the trappings of fame (“I’ve Lost Myself”), an overblown ode to the artist’s self-perceived determination and domination (“I’m the Best (Funky Fresh in the Flesh)”), and a PSA about the dangers of prescription drugs (“Pillz”), “As U Were” is somewhere in the middle – deeper than most popular tunes but still something of an underachievement from one Lyrics Born.

Lyrics Born :: As U Were
6.5Overall Score
Music7
Lyrics6