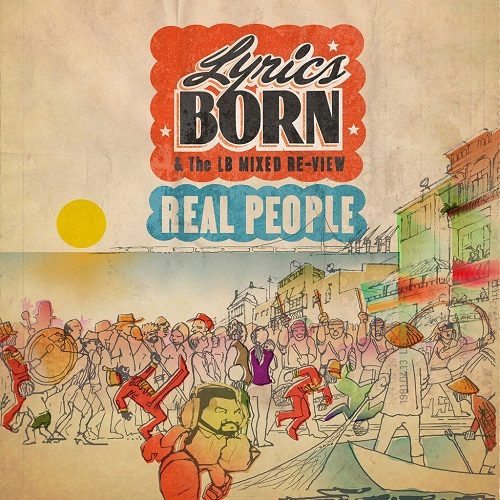 An integral part of West Coast indie hip-hop history, Lyrics Born went, in the past twenty years, his individual independent route. A route that on his latest takes him down to the Big Easy. “Real People” was entirely recorded in New Orleans with the help of local players that include members of Galactic, Dumpstaphunk, Preservation Hall Jazz Band, Rebirth Brass Band and The Revivalists. Stemming from a similar tradition back in the Bay Area, he is naturally drawn to the earthy funk of N’awlins. If you think being backed by a band of professional musicians is an entirely different beast compared to rapping over one-man beats, LB has all the job experience needed, evidently having spent enough time figuring out how, as a rapper, to become a peer of exactly the kind of accomplished musicians he works with these days.

Relative obscurity might just have been a blessing in disguise, as he has never been forced to follow a winning formula he happened upon. The comparison may throw some off, but Lyrics Born is the artist Tone-Loc could have grown into if he had the chance, the will, and the time to mature from two-hit wonder to a rap artist who fully explores his peculiar faculties in the field of music. Some rappers can be bigger than rap – not in a cultural, political or economical, not even in an artistic sense, but in the sense that one eventually comes to the conclusion that there’s gotta be more to some rappers of a certain, let’s say musically mercurial predisposition. For Asia Born it began with tracks like “Balcony Beach” and “Lady Don’t Tek No,” and while he lost some of the poetic touch that made these recordings so great, he’s a now full-blown entertainer who has a firm grip on the funk and soul that are at the base of his musical understanding.

There’s no warm-up time needed, “Real People” erupts instantly with its eponymous track, between whose engaging hooks and bridges Lyrics Born reflects on his upbringing by divorced parents and his own parenthood in a down-to-earth manner. It won’t remain the only look inward, but first LB unleashes his showmanship for a couple of bonafide show tunes. The infectious “Chest Wide Open” chronicles a tumultuous relationship with a femme fatale that literally goes up in flames. David Shaw of The Revivalists delivers a soulfully tormented chorus as the band handles the relentless uptempo number with NOLA precision. Alternating between intricate high-speed raps and a hook that channnels the sexual charisma of classic rock lead singers, “Sir Racha” is as boastful as anything Lyrics Born has ever recorded:

“I’m the Head Asian In Charge
I Like It, I Love It, I’m the Asian DeBarge
I’m your long lost cousin
My foot up yo ass like a damn sock puppet
So don’t piss me off
Got a history of, blatant disregard
[…]
Y’all children shit
Field trip shit, Bob the Builder shit
I got a toy box that’s filled with shit
I got a voice box that kill this shit
Cause I built this shit
Drilled it, nailed it, sealed this shit
Y’all ain’t doin’ nothin’
I tore down the walls, y’all stole the copper plumbing
Y’all steal this shit”

Rock influences are also found in “All Hail the Queen (Ma Belle Reine),” atop the obvious funk foundation, and it becomes obvious that Lyrics Born is one of the few rap guys who truly understands the potential of rock and funk. The focus remains on the female species with the vaguely suggestive “Rock-Away,” while “Holy Matrimony” spells things out more clearly in rap fashion as the song examines the old ‘mother-in-law’ staple from the husband’s perspective. Clearly placed as a sincere moment following the knee-slapping comedy routines of “Holy Matrimony,” the intimate “Around the Bend” gives two lovers the time and space that family life can deny them. It’s a rare song, one that dares to imagine a longterm relationship. Too cute for some, perhaps, as if eavesdropping in on pillow talk as LB dreams of a “gentle upslope of five acres (…) where we’ll plant our family tree.” Still this is exactly the type of music that is reserved for the kind of multi-talented and mature artist Lyrics Born happens to be. It’s a universal piece of music that transcends barries, including musical ones.

Sonically, though, “Around the Bend” is the odd one out as the following “Good Riddance” brings back the blaring horns, stomping drums and juddering guitars. Again LB’s act is a bit on the theatralic side, but that doesn’t deter from the fact that the song deals with real people problems like getting laid off. “WTF?” channels frustration into poignant social commentary:

“Explosions all over the globe – some emotional
Some ordered by remote control via mobile phone
Storms rip a hole through your home like a roller coaster
Mother cryin’ over her son, she’s inconsolable
Can’t afford the payment in the neighborhood I’m raised in
Treated like a stranger in the place I made famous
Fightin’ for the basics, it’s hostile and heinous
Each generation slides further down the totem pole…”

The final third of the album could be stronger, as “Mr. D.I.L.L.I.G.A.F” is too Kid Rock-esque despite the advanced delivery and evident gift of gab and fails to establish Lyrics Born as a reckless character. By the same token, “In Confidence,” another page from the rap and rock canon, is too nursery for a writer of his stature. The closing, slightly ’80s pop-sounding “2nd Act” is rather vague lyrically, particularly compared to “Around the Bend,” which too addresses the act of turning a page in life, but does so with the sweet and succint lines “This is what we worked so hard for / Our second act, an encore / I wanna grow old with you / wear old people clothes with you.” All the more refreshing is the ‘Real People Remix’ of the Preservation Hall Jazz Band’s instrumental piece “That’s It!,” which becomes a bubbling gumbo pot of swing and scatting and stuttering Latin freestyle drums.

Given Lyrics Born’s broad palette, one is perhaps inclined to burden him with too much responsibilities. Singer, songwriter, rapper, producer, entertainer, voiceover talent – does Lyrics Born have to excel ‘everywhere at once’, or can we cut him some slack in some sections? Overall “Real People” is a very solid album at the intersection of rap and – not everything else this time, but the freshly updated yet deeply rooted sound of contemporary New Orleans jazz and brass bands, similarly to what the album’s producers Robert Mercurio and Ben Ellman have done with their band Galactic. The powerful background gives Lyrics Born the opportunity to get some things out of his system he previously might not have. “Real People” ranks among his more even and potent projects.