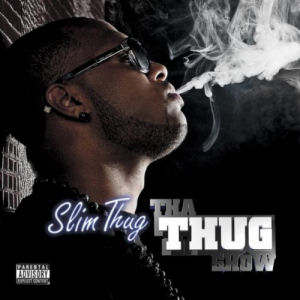 “I cain’t stop, I gotta make my nigga Pimp proud
That’s why you see me reppin Texas up in front of crowds
Thugged out, every nigga ride with me scratch
Don’t start shit, but we stay ready for combat
Don’t know how to act, rip the fuckin club up
We just like ’em so the gangster niggaz love us
A street nigga get a good girl pussy wet
She say she comin home with me? That’s a bet
Before we jet we get wasted off Patron straight
After that see if her friend gon’ participate”

Stayve Jerome Thomas b/k/a Slim Thug exists at that curious nexus between commercially successful household name and obscure regional Texas rap star. He was “Already Platinum” in the streets before his first major label album was ever released, but success turned out to be his own worst enemy. Geffen had no idea how to market the Southern sensation when he blew up nationally off the success of “Like a Boss,” and even though the song was popular enough to be parodied by SNL stars The Lonely Island he was bounced back and forth between independents and major labels afterward. As writer Pedro ‘DJ Complejo’ Hernandez noted, Thugga had to live with the irony that artists he once picked as top prospects of the industry like Young Jeezy went on to more commercial success and acclaim while his career stalled.

Thankfully “Tha Thug Show” shows that the three things which made Slim Thug a crossover success on his first major label release haven’t changed at all. His “Nawfside” Houston drawl is as long as it ever was. His wry sense of humor which translates to listeners in any part of the country still works. Most importantly Slim Thugga has a personality which draws listeners into the stories he tells, no matter what the topic of the song is. That’s a quality rarer than diamonds in rap, because a million people can write good lyrics on paper, but only a handful have not only the vocal tone but the conversational flow to express what they penned and the flair to make it interesting to the audience. Thug’s high marks in those categories allow him to occasionally get away with raps that could be considered boring if spit by a different Texas rapper. For the most part though Mr. Thomas works on being compelling beyond his God given talent – he’s relatable to his audience. How many men out there dream of being as “Free” as Thugga raps about?

“Ha, no marriage for me, I’m cool
To give the single life up I’d be a fool
Party all night, sleep all day
Pack up and go when I want to get away
This weekend ‘waii, next L.A.
Down in Miami just to see the Heat play
Settlin down? Nah nope, not in my world
Why pick when I get all the pretty girls?”

When it’s time to get serious though, the soulful KC produced “Coming From” featuring Big K.R.I.T. and J-Dawg shows off the deep thoughts and feelings of a Northside gangsta who’s not always proud of the negativity and violence around him.

“This where the gangsters survive, and bitch niggaz hide
Somebody from your block got got, you gotta ride
Where the bitched is snitches, that’s why you cain’t trust ’em
And if you still hustlin you might not wanna fuck ’em
The block is on fire, them laws want you locked
And even if you penny hustle they take the little that you got
Where niggaz get shot, and it ain’t no big deal
Cause e’rybody took one even if they ain’t killed
It’s hard to cry for ’em, we so used to it
Live every day like it’s our last just like that nigga knew it”

Slim Thug’s producers play to his Southern strengths and accent well on this CD, with Mr. Lee putting in a majority of the work but still being ably assisted by the likes of Lex Luger, Midas and Play-N-Skillz. If there’s a major detriment to “Tha Thug Show” it’s only that the Thugga seems too willing at times to share the spotlight. For the most part that’s acceptable given the quality of the guests, such as Rick Ross on “How We Do It” and B.o.B on “So High,” but when only 4 out of 15 tracks feature ‘Tha Boss’ on his own you almost wonder how in charge of business the CEO really is. Still there’s too much to like here to hate, from the crooning of fellow Texas rap star Z-Ro on “Gangsta” to the superbly pimped out “Caddy Music” with another fellow Texan legend – Devin the Dude. For Southern rap fans in general and Slim Thug fans in particular, “Tha Thug Show” proves that he’s going to continue repping Northside for years to come.